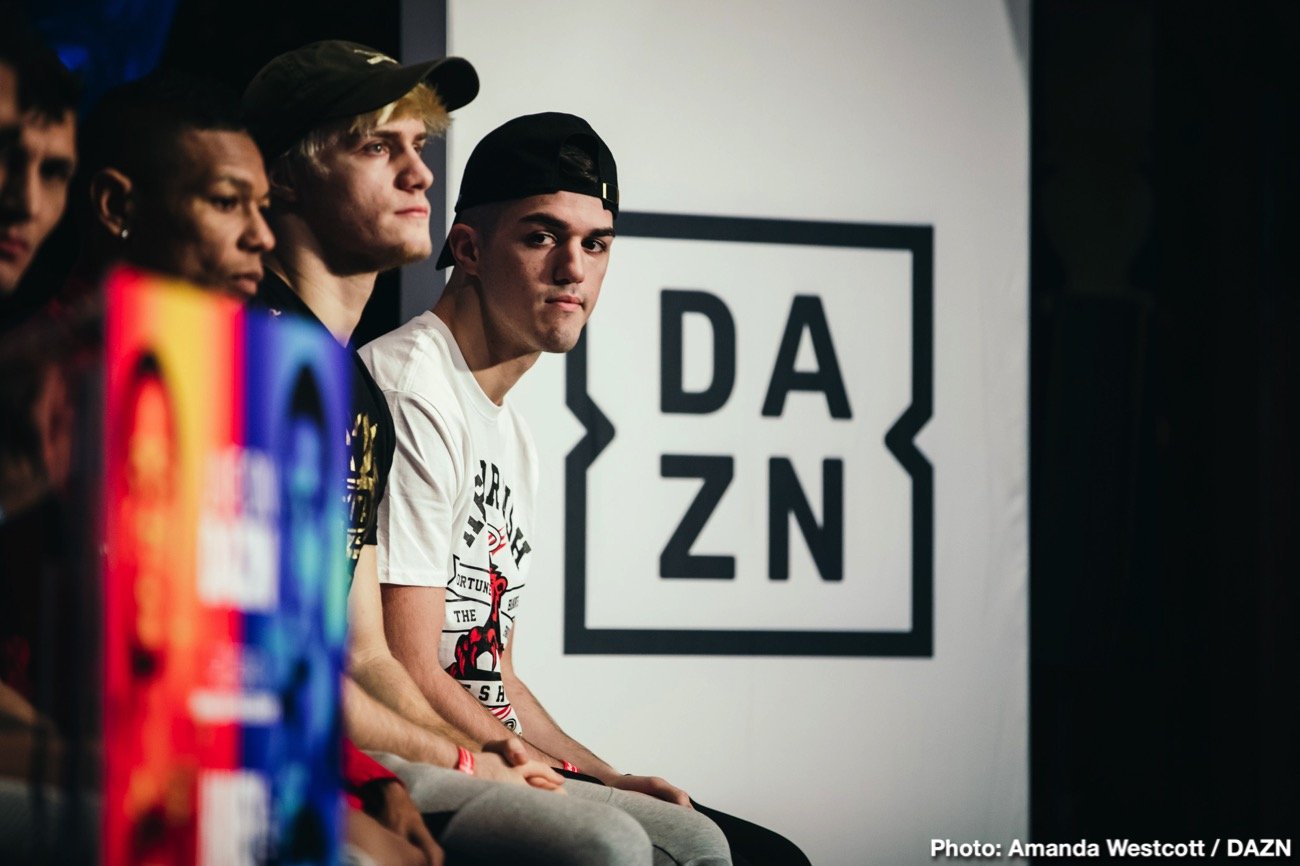 The purpose of this article is to take a deep dive into the one-year mark of operations for DAZN USA. Back in May of 2018, Eddie Hearn announced a major deal worth up to a billion dollars with the streaming service DAZN as part of the launch for DAZN USA in conjunction with Matchroom Sports USA. Hearn boasted about the having biggest yearly budget in the sport, even to the point of carrying around a Gucci bag bragging it was full of cash as he applied pressure on his rivals stables in America.

Eddie Hearn promised American fight fans 12 stacked cards filled from top to bottom with PPV level matchups. Filling out the other 4 events to make it 16 per year in America, Eddie spoke of those as being absolute bangers. In just over a year’s time DAZN has managed to produce plenty of quality bouts and with HBO bowing out of the boxing business after 45 years, was just what the doctor ordered for DAZN.

The first 6 months of operations in the US starting late September with Anthony Joshua vs. Alexander Povetkin had more to do with what was going on outside of the ring. With HBO stepping away from the game Canelo Alvarez and Golden Boy Promotions we’re without a network deal. That quickly changed almost overnight when news broke of Canelo inking a 5-year, 12-fight deal worth upwards of 365 million dollars. Undisclosed at the time, but recently reported that GBP got a 5-year deal worth around 90-million. From the sounds of it from interviews Canelo had no idea that Oscar De La Hoya’s GBP was tied to the DAZN.

Once Canelo was secured and Anthony Joshua was signed on a fight by fight basis, the next domino to fall was Gennady Golovkin. It took much longer than expected as Golovkin was offered lucrative deals from Top Rank tied with ESPN and Al Haymon’s PBC. Between Canelo/GBP and Golovkin, DAZN is on the hook for well over 500 million over a 5-year stretch. Anthony Joshua got between 25-30 million for the Andy Ruiz Jr. fight. Although rumored to be not as much as their June bout, another truckload of money is owed for the rematch. To compare it to another startup investment project in Premier Boxing Champions, DAZN has already spent more than Al Haymon and Waddell & Reed overall. In fact Haymon is still using W&R money to fill in the gaps from the rising guarantees most of the top flight PBC fighters have enjoyed since DAZN entered the frame.

As a company, DAZN has around 6 billion dollars owed in sports rights fees over a five year period. You would think more boxing writers would scribe detailed articles based off the money spent in the United States alone, along with a 100% monthly price increase that even DAZN head of operations John Skipper admitted was not planned. As we know for those who followed, it was the complete opposite when it came to Al Haymon. After several months many in the boxing media were doubtful the PBC would survive because of their well-documented burn rate. Article after article tore down Al Haymon’s venture and within 6-months to a year the press and fans began to dig their grave. I for one wasn’t acting as if we were privy to the boardroom meetings and didn’t bring one-sided judgments on the quarterly fund updates that were used as further evidence the PBC was dead. In fact Chris Mannix still asks questions about the investment & at every chance he gets criticizes the PBC if they lose money on an event on his podcast.

But I guess it is okay when Golovkin is paid 15 million for Steve Rolls. Meanwhile the company he works for in DAZN has a crazy burn rate and will obviously need to add more main stream sports content to become the ‘Netflix’ of sports. If the media is taking a wait and see approach having learned not to jump the gun as they did with the PBC, that’s fine. But at least fully admit it, if not then they should be just as critical towards DAZN. The sports business media has done a great job reporting on certain moves, potential pitfalls, and future rights the company will need to acquire to fulfill their goals.

Let’s look at this openly and honestly something we don’t get that much in today’s boxing media. The first 6 months of DAZN was mediocre to poor other than a few decent upsets and mid-level fights. For the most part the events featured the favorites versus heavy underdogs. They managed to secure the rights of the World Boxing Super Series which paid dividends as the tournaments advanced.

In the second quarter of 2019 late April is where DAZN finally started to find a groove. The Rungvisai-Estrada rematch and Roman-Doheny card was an enjoyable night of fights. Add in Canelo-Jacobs and a huge upset by Andy Ruiz Jr. over Anthony Joshua for May and early June. Soto/Acosta was a blast and the WBSS cruiserweights stood out in June. The third quarter gave fans a unification bout between Jose Ramirez and Maurice Hooker along with Vergil Ortiz making a statement.

The final quarter of the year has been superb for DAZN and a heaping of credit is deserved for their dubbed ‘Fight Season’ schedule to end the year with a big bang. Canelo-Kovalev was very competitive before the stoppage and Taylor/Prograis was a barnburner. Even fights on paper like Golovkin/Derevyanckenko and Inoue/Donaire were far more intriguing in the ring than first thought. Subscribers still have Briedis/Dorticos for the WBSS cruiserweight final and the most anticipated matchup of the year Ruiz vs. Joshua 2. All things considered DAZN has stepped up their game sharply after coming out of the gates slow.

This is not an article to judge the sustainability for the sport of boxing on DAZN in the United States. The hardcore boxing follower and a hopefully a decent amount of Canelo casuals have gotten their monies worth thus far. In its last remaining years HBO produce a subpar product so in that sense DAZN has filled in quite nicely. DAZN and Eddie Hearn have not lived up to the false promises of deep cards jammed-pack with high level fights. Eddie has yet to deliver any resemblance to an ‘Absolute Monster’ of a card. The majority of 12 to 20 boxers he spoke of potentially signing hasn’t become a reality. But in a year’s time DAZN has acquired the biggest name in boxing and a litany of middleweights he could be matched with. Now all DAZN needs is to get Canelo back to 160 and somehow talk him into facing Golovkin in a trilogy before it’s too late.

For the foreseeable future DAZN is delivering bang for the buck as the 2019 year comes to a close. The stream quality can be hit or miss at times but to be fair that’s part of the technology still needed to be advanced. The price jump was very surprising making DAZN the most expensive streaming service on the market. It’s disappointing from the perspective of attracting casual fans to the platform. I loved the ‘Fight Season’ commercials except not showing the dates for the actual fight their promoting. Nitpicking aside if DAZN can continue to give us the stream of fights we got over the last 8 or so months, there is no denying an avid follower of the sweet science is more than pleased. When Eddie Hearn broke the DAZN news this podcaster was willing to wait and see while others with an agenda in the part-time media tore down the service a few months in probably because of the Wilder/Joshua failed negotiations and Eddie coming off as a prick. The middleweight division could be matched in a round-robin at 160 and the 3rd WBSS season, is just two items out several this hack-of-a-scribe will be looking for in 2020 on DAZN.