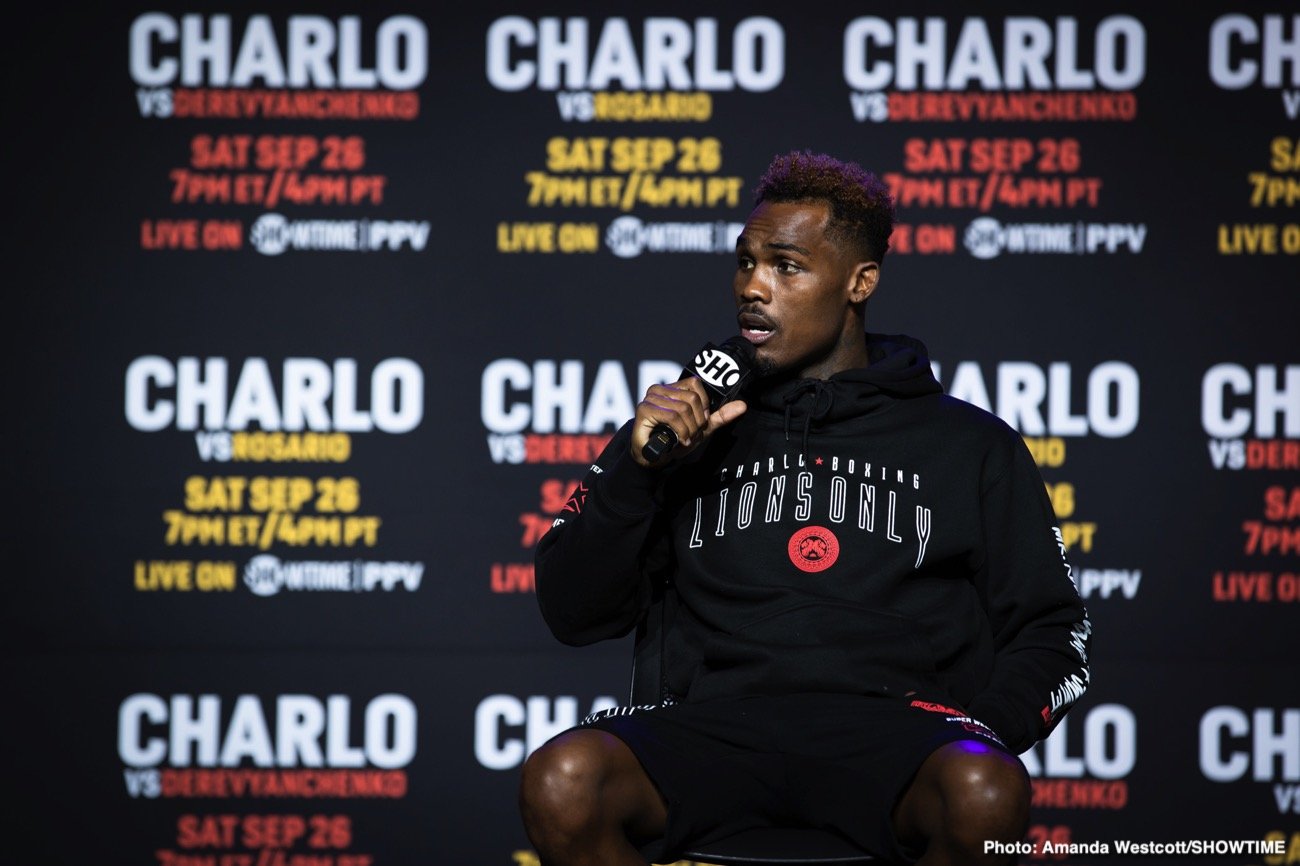 This Saturday, Jermell and Jermall Charlo hailing from Houston, Texas, try their luck in creative Showtime doubleheader PPV featuring worthy opposition. In the red corners will be Jeison Rosario and Sergey Derevyanchenko, both dangerously hungry fighters.

Names such as Luis Nery, Brandon Figueroa, John Riel Casimero, and Daniel Roman fill out what equates to a 6-fight card with a 30-minute interlude for the broadcast team. The Charlo bros are looking to kick in a door. They’ve been steadily knocking for quite some time. This is their night to shine, so we’ll see if they can show and prove in the ring and on the numbers.

The Charlo twins are well known inside hardcore boxing circles after grinding their way up over the last four years. Back in May 2016, the twins became junior middleweight champions on the same night and haven’t looked back since.

Jermall moved up to middleweight not long after defeating Jullian Williams while Jermell continues to operate as a main clog to the Premier Boxing Champions 154-pound unofficial tourney that’s played out on Showtime and Fox Sports.

They worked their way up on Adrien Broner’s and Erislandy Lara’s undercards, grabbing fans’ attention by knocking out opponents paving the way to take the main stage. 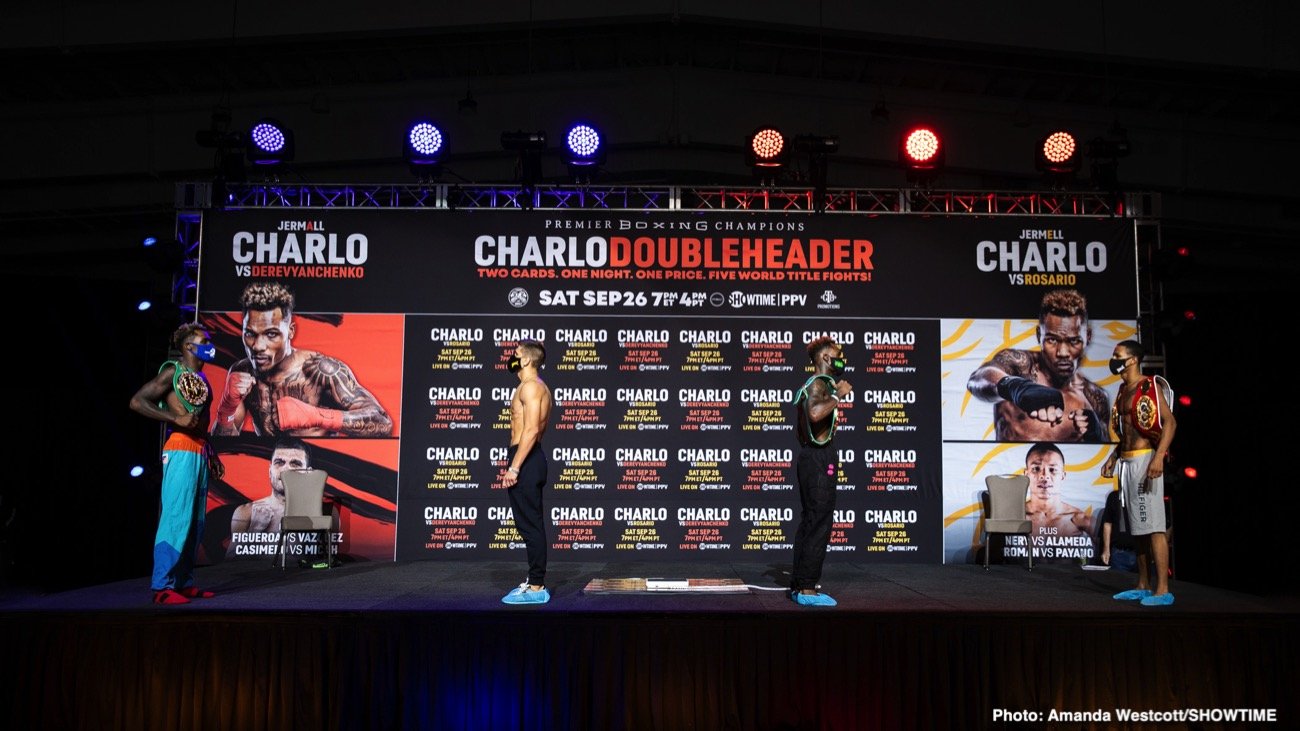 In December 2018, Al Haymon gave the Houston natives the kickoff show to a new 4-year FOX deal that drew a peak of 2.4 million viewers. In the main event, Jermall Charlo had his hands full with Matt Korobov but was able to close strong and secure the victory.

Jermell encountered his first loss as a professional to Tony Harrison, although the outcome is one for debate. Jermall went on to fight twice on Showtime versus Brandon Adams and Dennis Hogan. Jermell stayed on FOX, scoring a vicious one-hitter quitter over late-replacement Jorge Cota. Tony Harrison injured his ankle but healed up to be ready for what turned out to be a damn good rematch scrap last December back on FOX.

Tony Harrison was knocked down in the 2nd round but managed to get up, not to survive or fight timid, but push the pace while landing clean punches. Charlo changed the fight in the 11th round by getting a knockdown, which led to another 2nd knockdown, and this time Harrison was very hurt.

Charlo closed the show as the referee jumped to halt the action via a technical stoppage. Directly in their warpath stand two meaningful fighters with nothing to lose and a ton to gain beyond just money.

Sergey Derevyanchenko may not have a bunch of pro fights, but his performance in bouts with Gennadiy Golovkin, Daniel Jacobs, and Jack Culcay prove he’s ready to pull the upset. Can this third title shot be the charm for Sergey?

Style-wise, Sergey, and Jermall will produce fireworks as both men don’t look to play it safe on the outside. Derevyanchenko does have some quality skills as a mid-range guy but prefers to live dangerously, taking the fight to his man attacking the body and head. 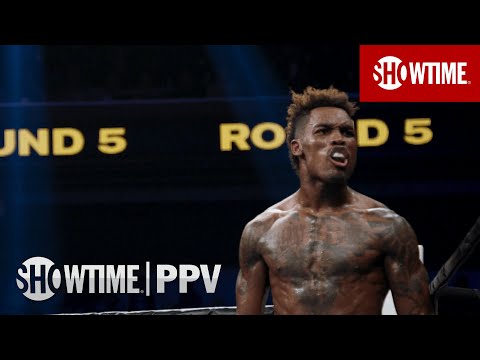 Derevyanchenko has a habit of starting slow, as evident in his outings with Triple G and Jacobs getting knocked down early. But once his engine is warmed up, Sergey will stand toe-to-toe and throw thudding punches.

In both of his losses, he was coming on strong enough to make a fair amount of observers think he snuck by GGG. It seems Sergey either has moments of defensive lapse and/or can wear down later in fights, not counting Golovkin fight. Against Culcay, he did okay early and was winning the battle, then got buzzed up but to his credit, finished strong with a second wind.

Jeison Rosario has been lurking on the 154 fringe contender level for the last few years, facing the likes of Nathaniel Gallimore, Mark Anthony Hernandez (twice), Justin DeLoach, and Jamontay Clark.

Those names aren’t the top of the food chain clearly, but it did give Rosario time to grow and gain much need experience win, lose, or draw. Riding a 5-fight win streak into his bout on the road in Philadelphia as the challenger to J-Rock, Rosario was determined to make a splash.

And make a splash he did by pulling off one of the biggest upsets of 2020 in the main event on FOX. The 154-pound division has given us fans some great fights and upsets, which is how Williams got his two belts by upending then-unbeaten Jarrett Hurd. 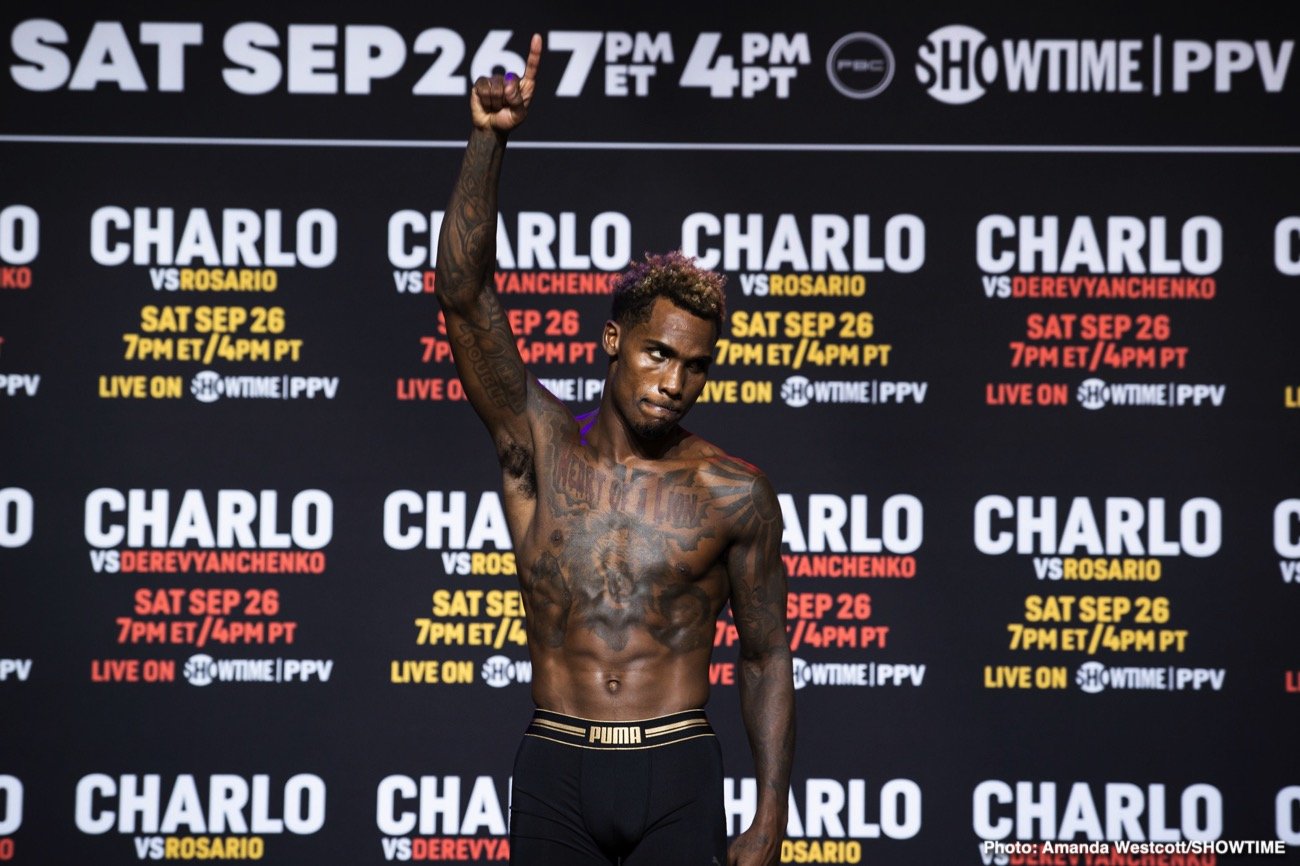 Charlo vs. Derevyanchenko is the closer to 50-50 fight on paper according to the betting windows, so it’s a good one to start with. Both men like to get inside and land bombs, so it shouldn’t take that long for the fire to be light.

We know Sergey can take a great punch and keep on ticking even when he’s been hurt and knocked down. Charlo, on the other hand, appears to possess a set of whiskers and power at 154, but both haven’t been proven at middleweight just yet.

Charlo holds a hand speed advantage over Sergey, and he’s a more fluid combo puncher. Fundamentally speaking, Sergey has a better background; as previously mentioned, neither man will be overly focused on defense.

Which every boxer can use his jab to faint and land clean along with putting in work to the body will likely get his hand raided. As the exchanges start to kick in, Charlo has a knack of adjusting the angle of his punch while it’s in motion.

The inside counter, along with some upper body movement, will be the difference. Look for this one to be a great two-way fight with either combatant capable of a 7-5 victory. 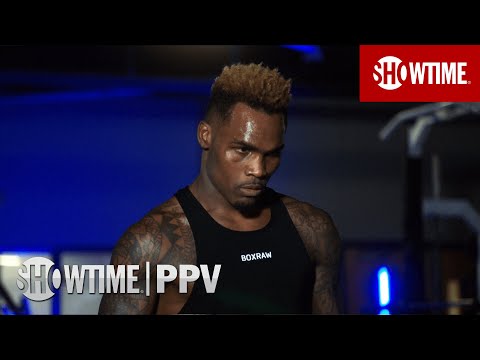 Charlo vs. Rosario looks to be a clearer-cut as long as Charlo doesn’t get overconfident ala, Jullian Williams. J-Rock was doing his thing until he got caught flush and never fully recouped. J-Rock has shown to be a bit chinny, unlike Jermell.

Charlo’s use of head movement behind a high guard if he decides to bang for long stretches with Rosario will be a must. Rosario will end up coming forward but can’t look to land one-big punch and has to straighten out his punches some.

At times Rosario squares up and leaves himself wide open, throwing haymakers hooks, Charlo counter shots, and timely exchanges are where this fight will be won. Fun stuff as they go back and forth, look for Jermall to take a slightly measured approach then we’ve seen in the last few years enabling him to land the crisper shots that do more damage. 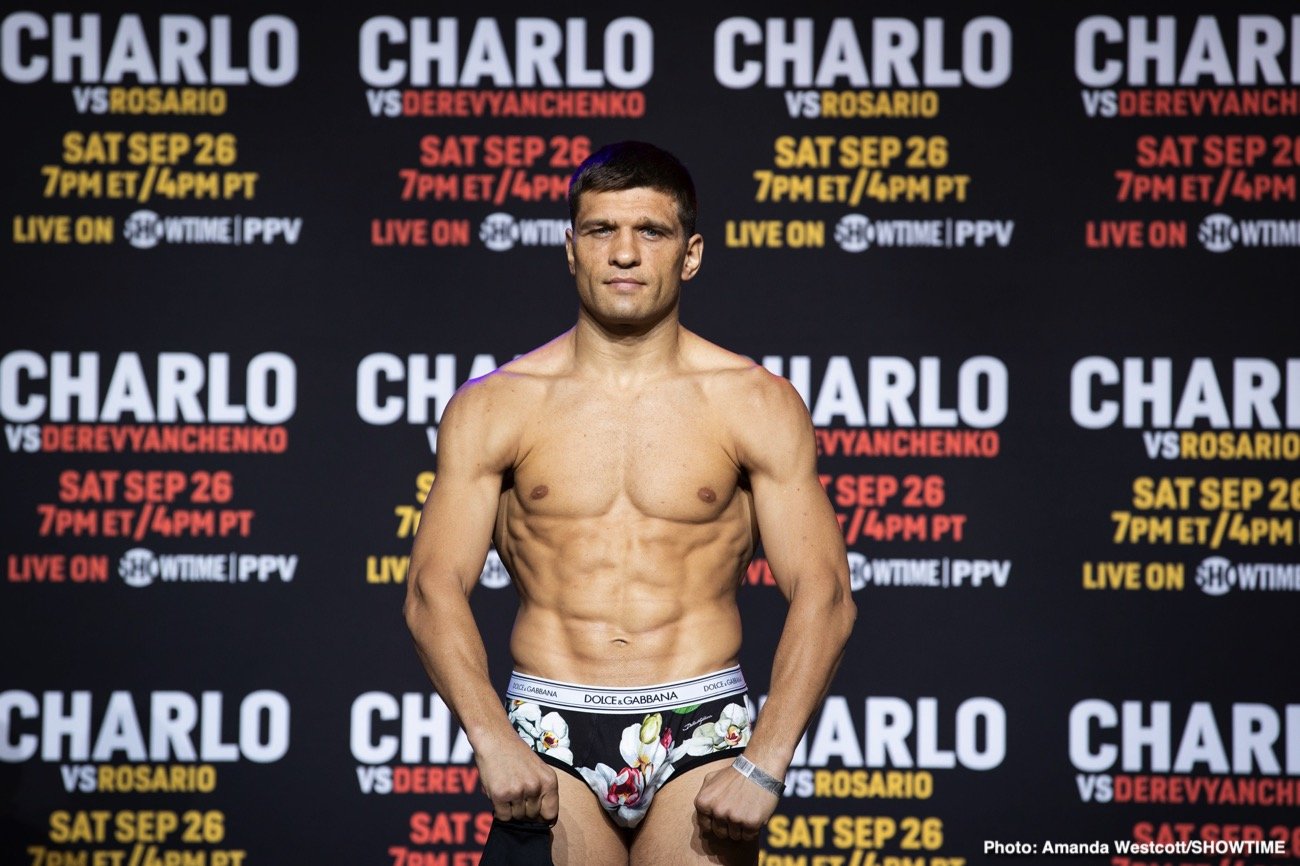 Saturday’s event has intriguing matchups in the main events of the doubleheader portions of the card, but for some strange reason, too many of the boxing media (hence the fans) have solely focused on the price point.

It’s very strange (not that strange) hearing some of the same media folk’s stances on the UFC PPV’s which happen once a month, not to mention the price is in line with the normal amount fans have forked over for the last chunk of years.

Some are totally against PPV, and that’s just fine; the key is consistency. Based on PPVs like Canelo vs. Liam Smith, Mayweather vs. Berto, or Pacquiao vs. Rios, this PPV is a good bang for the buck, which is precisely what the paying customer and media usually ask for.

My Official Predictions: Jermell by late stoppage and Jermall by Majority-Decision.

Side Note: Keep an eye out for the WBSS Cruiserweight Final between Maris Briedis and Yuniel Dortitocs on DAZN in a fight that screams action-packed. Also, Josh Taylor Returns on ESPN+.