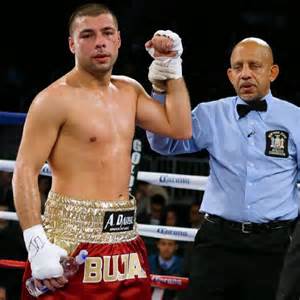 DETROIT– Unbeaten cruiser-weight Steve Bujaj, (12-0-1, 9 KO’s); of Tuckahoe, New York, comes back to Detroit for an eight round co-main event. Bujaj, will be one of the headliners at the Masonic Temple-Jack White Auditorium in Detroit on Saturday, November 8. It is his first time back fighting since suffering a broken jaw. He will take on veteran Zack Page (21-44-2); of Warren, Ohio in the highlighted match.

Bujaj, who came to America as an infant from his native Albania, is hoping to have support from the large Albanian community that resides around the Motor City area. “I want the Albanian people to have an athlete they can rally around and be proud of,” said Bujaj. I feel the Detroit area can be a second home to me and I want to be an inspiration for my ethnic base.”

Bujaj, a two time New York Golden Gloves champ is preparing for this comeback training locally in Inkster. He suffered his broken jaw last year against Winky Wright in a brutal 10 rounder in Brooklyn.

Middle-weight Lane Staal Jr. (11-1-1) of Canton, Michigan is hoping to come in at 154 pounds. Also, on the card will be hard hitting heavyweight, Juan Goode of Romulas, Michigan.

Staal is expecting to bounce back from his only loss, last April, when Patrick Boozer upset the local contender in an ‘alley brawl’ in Dearborn. A head butt from Boozer contributed to this first loss for Staal. Trainer Mohamed Hamood has promised that Staal will showcase a future champion style performance. “He is in the best shape and wants to set the course for a belt fight, said Hamood.”