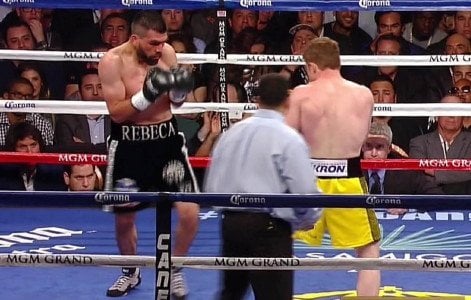 In an example of perfect match-making by Golden Boy Promotions, Saul “Canelo” Alvarez (43-1-1, 31 KO’s) easily destroyed the weak and slow Alfredo Angulo (22-3, 18 KO’s) by a 10th round TKO on Saturday night from the MGM Grand in Las Vegas, Nevada. This was the perfect opponent for Canelo to beat up on, as Angulo had absolutely no power and no speed.

Whatever happened to his one decent power is unclear, but he definitely didn’t have it tonight. Canelo, looking like a light heavyweight rather than a junior middleweight, used his size and power to hit Angulo at will with power shots. After being warned in between the 9th and 10th rounds that the fight would be stopped, Angulo went out for the 10th and took a few huge shots from Canelo. At that point referee Tony Weeks stepped in and halted the fight at 0:47 of the 10th.

The crowd booed the stoppage of the fight, as they wanted to see it go until the bitter end. However, the referee did the right thing because Angulo was the classic definition of a punching bag tonight. He was so incredibly slow of hand and foot that words can’t describe. But was surprising was that he didn’t even have his power, which is usually pretty decent. All I could think of was that he drained himself getting back down to 154.5 to make weight.

As bad as Angulo looked tonight, I think he should think seriously about retiring because I don’t see where this guy can go. He would have been destroyed by anyone in the ring tonight. It wouldn’t just take a light heavyweight sized Canelo to do the job on him. I think pretty much anyone would do a number on him with him looking that bad.

Canelo didn’t say which fight he wants next, but it would seem likely that he’ll look to fight the winner of the Sergio Martinez vs. Miguel Cotto fight. Forget about Canelo fighting WBA middleweight champion Gennady Golovkin. That’s not going to happen. Canelo is too easy to hit, and Golovkin would have destroyed Canelo if he had been in the ring with him tonight. Canelo will likely face the winner of the Cotto-Martinez fight, and then move back down to 154 and continue to fight welterweights or tailor made slow guys that Golden Boy digs up for him.

In another mismatch on the card, WBA super bantamweight champion Leo Santa Cruz (27-0-1, 15 KO’s) did what everyone thought he’d do in easily beating a purely defensive Cristian Mijares (49-8-2, 24 KO’s) by a 12 round unanimous decision. Mijares used to be a good fighter 6 years ago, but that was at super flyweight where his lack of power wasn’t as much of a problem for him. At super bantamweight, Mijares simply doesn’t belong and he showed it tonight by just running around the ring for 12 rounds without doing much.

It was like Mijares’ one goal was to keep from getting knocked out, and he accomplished that goal at the expense of the PPV crowd that watched it at home. The judges scored it 119-109, 120-108, 120-108. The judge that scored the fight 119-109 was being far too kind to Mijares, as he deserved all of zero rounds tonight.

Golden Boy Promotions needs to match Santa Cruz against somebody good for a change in his next fight. He mentioned wanting to fight Carl Frampton next. I think that would be a good fight, but definitely don’t bring Mijares back anytime soon. I’m frankly still surprised that they trotted him out, because Mijares has looked past his prime since Vic Darchinyan destroyed him in 2009.

In another poor mismatch on the card, the Jorge Linares (36-3, 23 KO’s) defeated an opponent that was made to order for him in the light hitting Nihito Arakawa (24-4-1, 16 KO’s) by a 12 round unanimous decision. Linares did well in hitting Arakawa with fast combinations to the head and body while backing up much of the time. It was strange to see Linares getting the better of an opponent while in the reverse mode, but he had a really slow and weak guy for him to beat up on tonight.

The judges scored the fight 98-92, 100-90, 100-90. Linares punched well to the body, and he likely would have gotten a knockout had he faced someone with other than Arakawa.

As good as this win was for Linares, it’s difficult to picture him being able to compete against Omar Figueroa, Terence Crawford, Richard Abril or Miguel Vazquez. Those guys would likely have his number.

In a fight much more one-sided that the generous scores given, Canelo’s brother Ricardo Alvarez (23-3-3, 13 KO’s) was beaten by super featherweight Sergio Thompson (29-3, 26 KO’s) by a 10 round unanimous decision by the scores 95-93, 95-93, 97-91. You can ignore the two judges that scored the fight 95-93, because there is no way on this Earth that the fight was that close. Alvarez was knocked down twice in the fight and he clearly lost the first 5 rounds of the fight, and at least 3 of the last 5 rounds. How two judges could come up with scores as ridiculous as those is beyond me. Those judges saw the knockdowns being the difference in the fight when in reality Alvarez clearly lost 8 of the 10 rounds.

Alvarez, a light welterweight, had a big size advantage over Thompson, who moved up from the super featherweight division to fight him at lightweight. Ricardo’s size advantage probably kept him from getting stopped in this fight, because he was hurt several times from the monstrous shots that Thompson hit him with.

I’d like to see Showtime televise more of Thompson’s fights in the future, because this guy can bang. It would be better if he had time to train next time and not just get pulled in at the last second to fight a guy two divisions above him in weight like Alvarez.

Other boxing results on tonight’s card from the MGM Grand: