Daniel ‘Miracle Man’ Jacobs and John ‘The Gorilla’ Ryder will be battling in a WBA super middleweight title eliminator on Saturday night to earn the mandatory position to champion  Canelo Alvarez.

Eddie Hearn says there’s a chance the Jacobs-Ryder winner can get a fight with Canelo but believes it’s more like that the Mexican star will choose to vacate his WBA 168-lb title when he moves up to 175 to go after the belts in that weight class.

In that case, the winner of Saturday’s Jacobs vs. Ryder fight will fight for the vacated WBA belt later this year.

With Canelo, you can’t predict what he’ll do because he’s veered away the bigger money match-ups in the last four years to take on fighters that the fans had no interest in seeing him fight. Jacobs fought Canelo in 2019 and lost to him.

If Canelo chooses to give Jacobs a rematch rather than face Gennady Golovkin again or face the 175-lb champions, it would be disappointing but predictable given the fights we’ve seen from the Mexican star over the last four years.

Former  IBF/WBA middleweight champion Jacobs (37-3,30 KOs) and Ryder (30-5,17 KOs) will be headling on DAZN this Saturday night at the Alexandra Palace, London, England.

The World Boxing Association has chosen to make this fight a title eliminator despite Jacobs having been out of the ring for a year and a half and ranked at the #9 spot with the WBA.

Ryder must get in close

“John was sort of giving him the stare, and Danny smiled and said, ‘Yeah,’ and John said, ‘Please, don’t take me lightly. Come with everything,’ and he [Jacobs] went, ‘I wouldn’t be in your backyard if I weren’t going to do that,'” said Hearn to iFL TV in revealing what was said in the exchange between Ryder and Jacob during their face-off after Friday’s weigh-in.

“You got two guys that are desperate to win, and it’s an honor to bring Danny Jacobs over here,” said Hearn. “I can remember the last time I brought an American name like Danny Jacobs over at this stage in his career.

“He’s a two-time world champion, he’s a huge star in America, and I’m delighted for John Ryder to be getting this opportunity just a few miles from where he lives. It’s a massive task for him because  I think Danny Jacobs is in great condition. He’s really up for it, and it’s going to be a great fight.

“I  think all fights do when you have two guys that can box as well,” said Hearn when told that many boxing fans suspect Saturday’sJacobs vs. Ryder fight will be a stinker.

“I believe he thinks he’s levels above John Ryder. With that in mind, I believe he’ll be prepared to let his hands go,” said Hearn about Jacobs.

As Hearn says, Jacobs believes “he’s levels above” Ryder because he selected him. Jacobs could have fought other contenders 168, but he wanted Ryder.

The fact that Jacobs selected Ryder over fighters like David Benavidez suggests that he feels confident he can beat him.

Of course, given the 15 months Jacobs has been out of the ring since his poor performance against Gabriel Rosado in 2020, he could lose to Ryder.

Jacobs hasn’t been the same fighter since he got a  massive payday against Canelo Alvarez in 2019.

It’s unclear whether the huge money Jacobs got in his fight with Canelo has taken away his ambition or if he’s showing the effects of aging.

Jacobs has been choosing the lower-hanging fruit since his loss to Canelo, selecting  Julio Cesar Chavez Jr. and Gabe Rosado in his two fights since the loss to the Mexican star.

Picking Ryder fits with the level of opposition that Jacobs has chosen for himself since 2020. Jacobs hasn’t taken any risks.

Ryder hasn’t exactly taken any risk with his career since his loss to former WBA super middleweight champion Callum Smith in 2019. In his two fights since his loss to Callum, Ryder has eaten Mike Guy and Jozef Jurko.

“Yeah,” said Hearn when asked if the Canelo Alvarez carrot is there for the winner of the Jacobs vs. Ryder fight.

“For John Ryder, Canelo always talks about fighting in the UK, and if John Ryder got a big statement win against Danny Jacobs, he’ll put his name in the hat, to be honest with you.

“But I think Canelo Alvarez isn’t necessarily looking at the winner of this fight. I’m sure he’ll be interested in the fight because he knows both guys, but I think this might be more about what Canelo leaves behind at 168.

“If he moves and starts fighting at 175, this super championship could be vacated later on in the year; we’ll have to see. We saw Eddy Reynoso’s comments.

“As I said in the interviews yesterday, there’s no deal reached for us. Everyone has put their proposals in. I guess they’ll [Canelo & Reynoso] make their decisions in due course,” said Hearn.

It’s improbable that Canelo will agree to fight the winner of the Jacobs vs. Ryder fight because he would receive a lot of criticism from boxing fans.

If Canelo faces the winner of the Jacobs-Ryder fight, he will continue with the weak opposition he’s been fighting since late 2018.

It would be better for Canelo to vacate his WBA title when he moves up to 175 and have the Jacobs vs. Ryder winner face David Benavidez,  David Morrell Jr., or Demetrius Andrade. 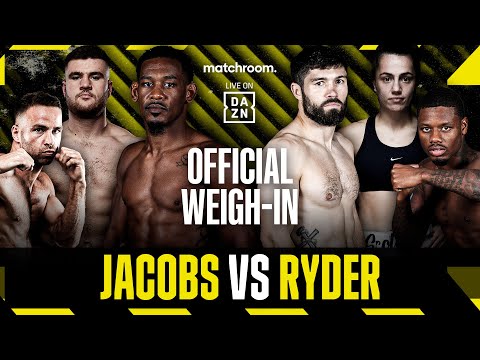