A day over a week ago, fans witnessed a genuine and absolute FOTY candidate, as unbeaten cruiserweights Brandon Glanton and Efetobor Apochi took each other through a hellish rumble in Minneapolis. You could be forgiven for not having heard too much if anything about either fighter before last Sunday’s simply epic fight between the two. But last week, on the under-card of the super-middleweight title fight win David Morrell scored over Mario Cazares, Glanton and Apochi well and truly stole the show.

It was a sensational slugfest, with both men giving and taking a whole lot over ten thrilling rounds. The two men went at it right from the get-go, and in round-six, fans saw something amazing. Glanton cracked Apochi with a big left hand to the head, followed by a right hand that left the Nigerian barely standing, the ropes holding him up. The ref issued a count but the fight seemed to be over. It HAD to be over, so limp, so gone, so out of it Apochi looked to be. 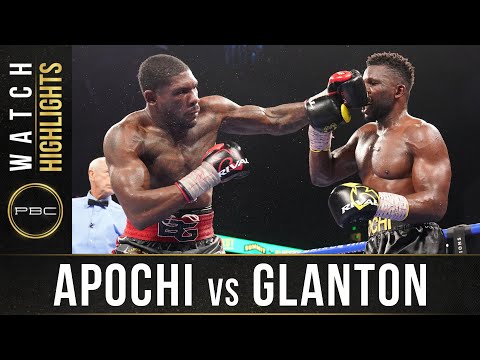 Instead, the bell chiming a second or so later, Apochi managed to come back. The last four rounds were quite simply awesome, with both men digging deep and testing one another in so many ways. It was, in the end a split decision win for Glanton, with the younger man by four years (to Apochi’s 33 years) winning via a point on each of the two cards that favoured him.

Now 14-0(12) – to the he-can-come-again Apochi’s 11-1(11) – Glanton scored not only an incredibly exciting win, but also a big win in terms of his future. The often used description, ‘the best kept secret in boxing,’ could be applied to Glanton; AKA “Bulletproof.” How is is that this guy was not on the radar big-time before last Sunday’s fight/win? How is is that the great Ronnie Shields, trainer of Apochi, had barely heard of Glanton before last week’s superb action affair?

We all know Glanton’s name now – and we sure as heck want to see more of him. Glanton supporters, those that have followed his career (the warrior from Atlanta having been a pro since 2018) now say he is THE best cruiserweight in the world today. That he might be. We all want to find out. While a return with Apochi is a real possibility (and Apochi sure earned his share of praise due to his part in the June 27 fight/war, and we want to see him back in action again as soon as is possible), Glanton might go looking for bigger fights.

So far here in 2021, Brandon “Bulletproof” Glanton may have given us The Fight of the Year, and he may well be the biggest breakthrough fighter of the year. Roll on Glanton’s next fight.