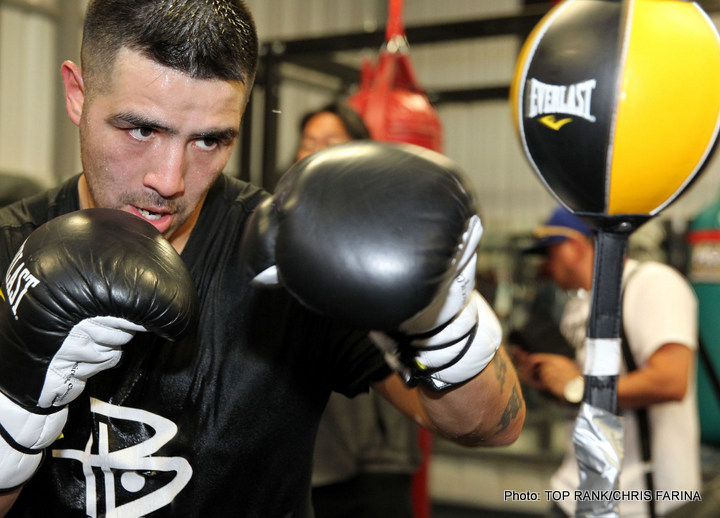 Former world champion Brandon “Bam Bam” Rios (33-3-1, 24 KOs) returns to the ring to take on Mexico’s Aaron Herrera (32-6-1, 21 KOs) in the main event of a Special Edition of Premier Boxing Champions on FS1 and FOX Deportes on Sunday, June 11 from The Pioneer Event Center in Lancaster, California.

“This is my first fight in Southern California in almost five years and I can’t wait to put on a show for those fans who have supported me throughout my career,” said Rios. “I’ve always given the fans a great show and I’m planning on picking up right where I left off and being better than ever when I get back in the ring. I’ve been training for a while in preparation for a great victory on June 11 on FS1 and FOX Deportes.”

“This is a terrific opportunity for me to face a fighter the caliber of Brandon Rios,” said Herrera. “He’s had a great career and fought many champions and I look forward to giving him everything I have. Fighting Rios is a great test for me and I’ll be ready to pass on June 11.”

Tickets for the live event, which is promoted by TGB Promotions, are priced at $30 and are on sale now. To purchase tickets visit the Pioneer Event Center’s website: www.uavpec.com

“Premier Boxing Champions on FS1 and FOX Deportes has come to epitomize all-action, fan-friendly matches, and this card fits perfectly into that mold,” said Tom Brown, President of TGB Promotions. “Brandon Rios is never in a boring fight. After a long layoff, I expect him to come out firing against Aaron Herrera and I don’t expect Herrera, a rugged Mexican brawler, to back down. I’m also excited to see the progress of Mario Barrios, who is moving up to 140 pounds, and Jose Miguel Borrego, a dangerous power puncher. It promises to be another fantastic night of boxing for those at the Pioneer Event Center in Lancaster, California and those watching the PBC on FS1.”

After a stellar amateur career, Rios, an all-action brawler, went unbeaten in his first 27 pro fights before he stopped Miguel Acosta in 2011 to win a lightweight world title. The 31-year-old added victories over Richar Abril, Urbano Antillon and John Murray before winning two out of three fights in a trilogy against Mike Alvarado. The Oxnard, California-native has challenged top welterweights Manny Pacquiao and Tim Bradley and will look to work his way towards another world title show in the 147-pound division.

Fighting out of Yucatan, Mexico, Herrera enters this fight on a three-bout knockout streak since October 2016. The 28-year-old was unbeaten in his first 24 pro fights including 16 knockouts before challenging for a regional title in 2013. He fights in the U.S. for the fourth time on June 11 when he takes on Rios.

A tall fighter for his division at more than six feet, the 21-year-old Barrios picked up seven victories in a jam-packed 2015 in which he stopped five opponents inside the distance and followed it up in 2016 with three more victories, including a 12-round decision over Devis Boschiero in July. The San Antonio native began his 2017 campaign with a stoppage victory over Yardley Suarez on the Keith Thurman vs. Danny Garcia undercard in Brooklyn in March. He continues his campaign at 140-pounds when he enters the ring on June 11.

The 30-year-old Rodriguez enters this fight on a three bout winning streak including a third round TKO win in April in his last bout. Fighting out of Nuevo Leon, Mexico, Rodriguez will make his U.S. debut on June 11 having won seven of his last eight contests with his only defeat coming via a 10-round decision against unbeaten Felix Verdejo last April.

At just 19-years-old, Borrego has burst onto the scene displaying big knockout power as he made his U.S. debut in February with a first round stoppage and followed it by stopping John Delperdang in the seventh-round of a televised contest this April. Fighting out of Aguascalientes, Mexico, Borrego will fight in California for the first time since turning pro in 2015.

Born in Lancaster, California and fighting out of Los Angeles, Watts turned pro in 2013 and picked up victories over previously unbeaten Maximilliano Becerra plus once-beaten fighters Michal Chudecki and Manuel Damairias Lopez before suffering his first loss last September to unbeaten prospect Eddie Ramirez. The 25-year-old who has fought professionally since 2013 will look to get back in the win column in his hometown on June 11.