Undefeated up-and-coming bantamweight prospect, John “Scrappy” Ramirez (10-0, 8 KOs) got a lot of boxing fans’ attention in mid-May with a potential knockout-of-the-year. He sent his opponent, Jan Salvatierra, crashing thru the ropes onto the ground outside of the ring for a sensational knockout victory on the DAZN’s opening televised bout.

The twenty-six-year-old orthodox boxer from East Los Angeles, California, obtained the vacant NABA super flyweight title with a dominating win. Referee Ivan Guillermo stopped the fight at two minutes and twenty-five seconds in the first-round, as (one loss) Salvatierra could not beat his ten-second count, even though he somehow got back into the ring. It was Ramirez’s second fight that ended before the second-round and his fourth knockout victory in his last five bouts.

“This win showed the boxing world that I am here. I know what I am capable of and that I bring a lot to the table. I want to show the world who I am. This win puts me on the boxing map, but I need to capitalize on it,” said Ramirez. “I am extremely ambitious, and I am not happy until I get what I want, and that is to win all four belts at 115-pounds. I will take it one fight at a time. The belts will come my way. I just need to continue to put on a good performance and win.”

Ramirez would like to get back in the ring as soon as possible to defend his newly acquired NABA belt, and if his ring activity is any indication, he will be fighting again soon. He has been very active, especially nowadays, as he had his tenth fight (in May) in the last twenty-one months, and Ramirez had a stretch last year in April and May when he fought four times in six weeks.

“I am one of the most active fighters in the country,” said Ramirez. “When you start winning, you get a lot of distractions. People want to be part of it. You might feel on top of the world, but I am very focused on the task at hand, which is to win all the world titles at 115.”

In order to continue to win to put himself in a position for a world title in the foreseeable future, Ramirez tirelessly trains at the 6,000-square-foot, state-of-the-art boxing gym, Brickhouse Boxing Club in North Hollywood, California (which opened in May 2021). He is constantly improving his boxing skills with his head trainer, Julian Chua, trainer and former four-time world title holder, Brian Viloria, and strength and conditioning coach, Chris Wong.

“I have one of the best teams in the boxing world. I am very blessed that I have such a great team,” said Ramirez, whose manager is David Shu of 3 Point Management (3PM). “They care for me, and they have my best interest. They are great mentors, and they support me. They keep me accountable. Not a lot of fighters can say that.”

Furthermore, he has obtained additional boxing knowledge and pointers from undefeated light heavyweight contender and former WBO super middleweight champion, Gilberto “Zurdo” Ramírez (44-0, 30 KOs) (no relation), who trains alongside him every day at the Brickhouse Boxing Club, as does Fulton. Ramírez (who will fight WBA light heavyweight champion, Dmitry Bivol, 20-0, 11 KOs, on November 5th) is also his promoter and made him the first fighter he signed to his new boxing promotional company, Zurdo Promotions. Zurdo, who has promoted Ramirez since his first fight (which was on the undercard of his main event bout against Alfonso Lopez), has signed several fighters to his company, such as undefeated prospects, light heavyweight Kareem Hackett (10-0, 6 KOs) and lightweight Carlos Nava (9-0, 6 KOs).

“I knew Ramírez because we have the same trainer [Chua], and he liked what he saw from me in the gym, so he signed me to his promotional company,” said Ramirez, who, along with Zurdo, were the first two fighters signed by 3PM. “He is the big bro, and I am the little bro. I do not have as much boxing experience as he does, but I learn a lot by talking with him and seeing him train daily.”

Zurdo Promotions has put Ramirez on several significant fight cards with large crowds, including three that Zurdo headlined. In only his tenth fight, Ramirez was televised on a significant boxing streaming service, DAZN. This type of fighting atmosphere and television coverage does not happen to many fighters until much later in their careers if they are lucky,

“It has been a great experience to fight on big cards this early in my career. Many people told me that before I went pro, I needed to go to Mexico to build my career, and that did not happen. I have proven many people wrong and made the best out of the opportunities given to me,” said Ramirez. “I ignore the crowd sizes. I am focused on one fight at a time and eventually winning world titles. It does not matter to me how big or small the arenas are. The event, whether ten people, 100 people, 1,000 people, or 10,000 people show up, it does not change my performance or focus.”

Ramirez had a promising but short amateur career (18-7, with most of his bouts taking place in significant national tournaments), fighting between 115 to 125 pounds, culminating with him becoming a two-time Sugar Bert national champion in 2018 and 2019. He was named the top performer at the Sugar Bert tournament in 2019. Ramirez also won the Regional Golden Gloves in Los Angeles, California, and the Southern California State title in 2018.

Despite being involved in the sport for five years and having twenty-five amateur bouts, he has achieved great success as a professional fighter. Ramirez, however, offsets his lack of experience and amateur pedigree with a tremendous work ethic, power (eighty percent knockout ratio), speed, and the confidence and poise he demonstrates in the ring, which is well beyond his age and fighting experience.

“My ring IQ is probably my best fighting attribute. It comes from being a student of the game and having a great understanding of the sport,” said Ramirez. “Boxing is art, like The Art of War [a book based on ancient Chinese military strategies by General Sun Tzu that is still used today by militaries around the world], where you pick your battles. You must know yourself, know your opponent, and know what you are good at and what you are not good at. Boxing is a mental game.”

Despite having a bright future ahead of him, life has not always been this good for Ramirez, particularly his childhood, which was extremely difficult. He moved from the United States to Honduras with his father when he was eight years old, and he had to adapt to living in another country and learning Spanish quickly. He moved back to the United States by himself when he was twelve, but he had to take care of himself since his mother was busy working long hours. Since no one looked after him, he was in the streets and around bad influences. Ramirez, however, was smart enough not to get too involved in street life because of what happened to his two older brothers. One passed away, and the other is still in prison. What happened to his brothers was always in the back of his mind when dealing with the wrong crowd. It had a significant impact on keeping him out of trouble, despite gangs, drugs, and gun violence being prevalent in his neighborhood.

“I come from the inner city, so, through my journey, I want to show people we do not need much where we come from because we do not have a lot of opportunities. The only thing we need is a vision, and we just need to show up every day and try to make it happen,” said Ramirez. “We are so small-minded where we are from, so my goal is to show people who grew up where I did that they are capable of anything, as long as they put their mind to it and find a way to make it happen.”

Ramirez found purpose and direction on the football field at Lincoln High School as the star running back with the help of his head coach, Masaki Matsumoto. Ramirez was instrumental in helping his team win three league championships and advance to the semifinals in the playoffs in his senior year. The football team’s success was even more impressive, considering that his high school had never experienced a great deal of winning before his freshman year. Lincoln High School was featured in a 2015 documentary ESPN: 60, “Letterman,” which focused on the football players dealing with drugs, gangs, and gun violence in their neighborhood, as well as living in broken families, all the while trying to stay out of trouble.

“My football coach, Matsumoto, was like my father, a mentor to me. I learned a lot from him. He made me a real man. He also helped me get closer to my mother. He told me that I am special, and I am here for a reason and made me believe that,” said Ramirez.

His success on the football field in high school helped him make the Los Angeles Valley College football team as a true freshman, however, he struggled to get playing time and felt like he was wasting his time in school since he was only in college to play football. Therefore, he quit college and joined a semi-football team, but that did not work out either. Ramirez did not like the politics he saw at the next level with who got playing time, and he was realistic that he did not have a future in football at five feet, four inches. He then tried to enlist in all four military branches, but they denied him because of the tattoos on his body and their visual placements.

He spent the next six months thinking about what he wanted to do, and then suddenly, he had a vivid vision telling him to go to a boxing gym, despite never boxing before. So, he started boxing in 2017 at Hall of Famer Freddie Roach’s Wild Card Boxing Club and trained there throughout his amateur career. Before his professional career began, he reconnected with Chua (who used to work at the Wild Card Boxing Club).

“Boxing changed my life. I have a purpose. I have goals. Boxing allowed me to expand and open new doors, showing me that anything is possible. I can make many things happen just off boxing,” said Ramirez. “I will do my best to take advantage of every opportunity that boxing gives me and reach every avenue like fashion, acting, becoming an entrepreneur, and taking everything that comes with it.”

For more information about Ramirez, and the latest updates on his upcoming bouts, friend him on Facebook at JohnRamirez, add him on Twitter at Scrappyboxin, and connect with him on Instagram at Scrappyboxing.

“My career is going great. I am not here to take part. I am here to take over,” said Ramirez. “I believe in myself. I know what I bring to the table. I have no doubt that to be the best, you must beat the best, and that is what I will do.” 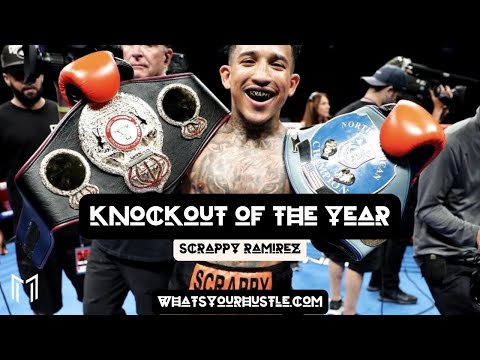