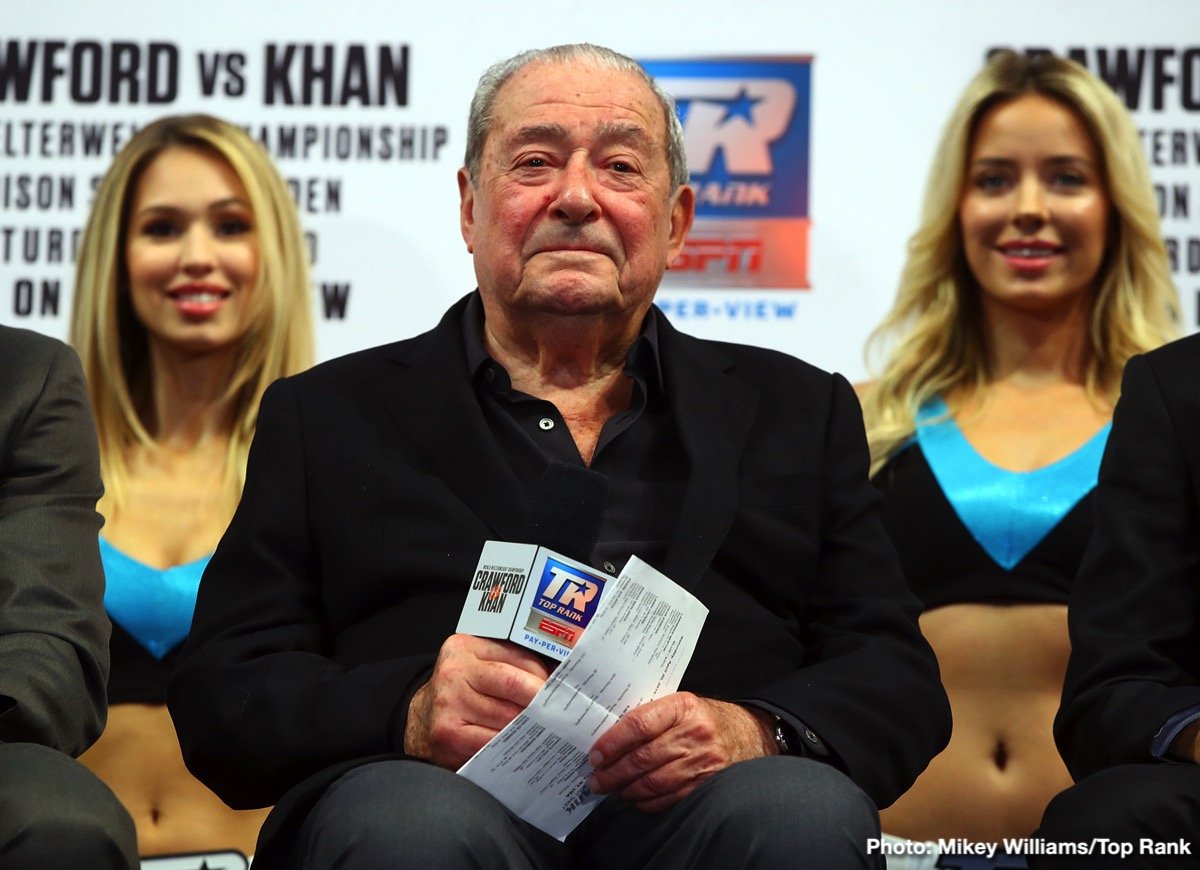 Promoter Bob Arum seems about as hot on seeing a welterweight showdown between Terence Crawford (his guy) and Errol Spence (Al Haymon’s guy) as we fans are desperate to see it on our boxing schedule. The general pick for the two very best welterweights on the planet today, Spence, the IBF champ, and Crawford, the WBO ruler, could give us the biggest and best 147 pound super-fight since the classic Sugar Ray Leonard-Thomas Hearns epic.

But Arum does not think Haymon shares his appetite for the fight, simply because, in Bob’s opinion, Haymon is no way near certain “The Truth” beats “Bud.”

Here’s what Arum had to say when speaking with Fight Hub TV:

“We’ve always been open…For Haymon it was a win-win for Andy Ruiz to go over and do that fight on DAZN because Andy Ruiz was not a marquee guy on PBC. So it was a win-win for him,” Arum said. “The question of whether he takes a marquee guy, which Spence certainly is, puts him in with Crawford — even though his network and ESPN would share the PPV distribution — that’s another thing because there question is, he takes a marquee guy who’s in danger of losing. And then he hurts himself.

“So the fact that he is reluctant to make the Spence-Crawford fight indicates to me that he has serious doubts about his guy winning the fight. We wanna do the fight because we think that Terence Crawford is the best welterweight in the world, and will beat Spence, and we’re prepared to do that fight on a 50/50 basis. The fact that Haymon hasn’t really jumped at that and is having difficulty with Spence, because he can’t pay him the right kind of money to fight other guys like Porter and so on, ‘cause it’s not there, indicates to me that he doesn’t have enough confidence in Spence beating Crawford to do that fight. It’s as simple as that!”

Do you agree with Arum – is Haymon the bad guy when it comes to this all-but guaranteed sensation of a fight not yet (or not ever) being made?

The heart literally jumps a beat at the thought of two of the sports’ fastest and finest boxing brains duking it out. For the seemingly otherworldly Vasyl Lomachenko aside, Crawford and Spence are almost certainly the very best boxing has to offer these days, and as such there would be more on the line than mere titles if these two climbed into the ring together.

In an age where the best facing the best rarely happens, these two not-yet-superstars (maybe never to become such, but by fighting each other on a grand stage the winner’s chances would be greatly increased) seem intent on finding out just who is the superior athlete, boxer, fighter, warrior. Both Crawford and Spence have the ability to excite the masses in a punchout as much as they can execute a chessmatch that delights the purists, and we could well be treated to a classic showdown when these two modern day masters collide. Again, this fight has to happen.

It’s highly unlikely either fighter is reluctant to get it on, so maybe someone else is to blame for this modern day epic not yet having gone down.