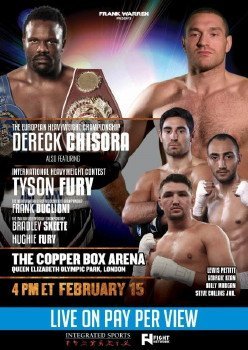 This is a late notice fight, scheduled to take place in London, Feb 15, so it doesn’t give Joey much time to prepare. Still, it’s like a late Christmas present, because Joey’s always had difficulty getting fights. Fighters need to fight to stay sharp. Those few times when Joey did get a shot at moving up, he just wasn’t ready. He’s always had the punch and decent skills, but he never had a chance to hone them. As a result, he lacks good defense and management of distance. As a result, he has come up short when those infrequent opportunities have presented themselves. His latest chance came in December (on short notice) against rising star Kubrat Pulev.

The fight took place in Germany, in front a big Pulev crowd. Pulev is a very good boxer with a big punch, but Joey did manage to drop him. Pulev retaliated with several hard body shots to TKO Joey. Those shots came from long range, and never should have landed. Normally Joey has the ability to avoid those type of shots, but he wasn’t sharp, physically or mentally, failed to step back or parry the shots away. As a result, Pulev had a heavy bag in front of him to tee off on.

Joey will face a completely different task with the hulking Tyson Fury. About the only good thing in getting this hulk of a man (6′ 9″) on short notice is he won’t have long to listen to Tyson’s motor mouth. As far as styles are concerned, if being a clumsy, awkward oaf is considered to be a style, then that’s what Joey needs to prepare for. He should ready himself for clubbing punches thrown after Fury attempts to push his head down. Tyson did just that against Steve Cunningham. Initially, Steve was easily out-boxing Fury, and even though he is not considered a big puncher, he managed to drop the big wind bag in the second round, but he couldn’t finish him.

Minnesota Ice fans think it would be great if Joey could catch this big doofus and shut him up. The sound of “Timber” please them very much. They want to sit back and watch as the ring billows and shakes as his big carcass crash-lands against the canvas. Of course they’re not being very objective, but his motor mouth doesn’t deserve the usual respect given to fighters. It’s as Archie Moore once said about Cassius Clay (Muhammad Ali). “I am going to button his lip”. Joey’s fans are calling for a “refrain”, although, Minnesota Nice fans are polite and wish to state it a little more delicately. That’s so London’s hoi polloi will understand their wish. In other words, they still want to see Joey’s glove(s) impact (hard) with the upper and lower edges of Tyson’s mouth, thereby downsizing this opening, and stopping all the impudent talk. There would be much rejoicing and jocundity!