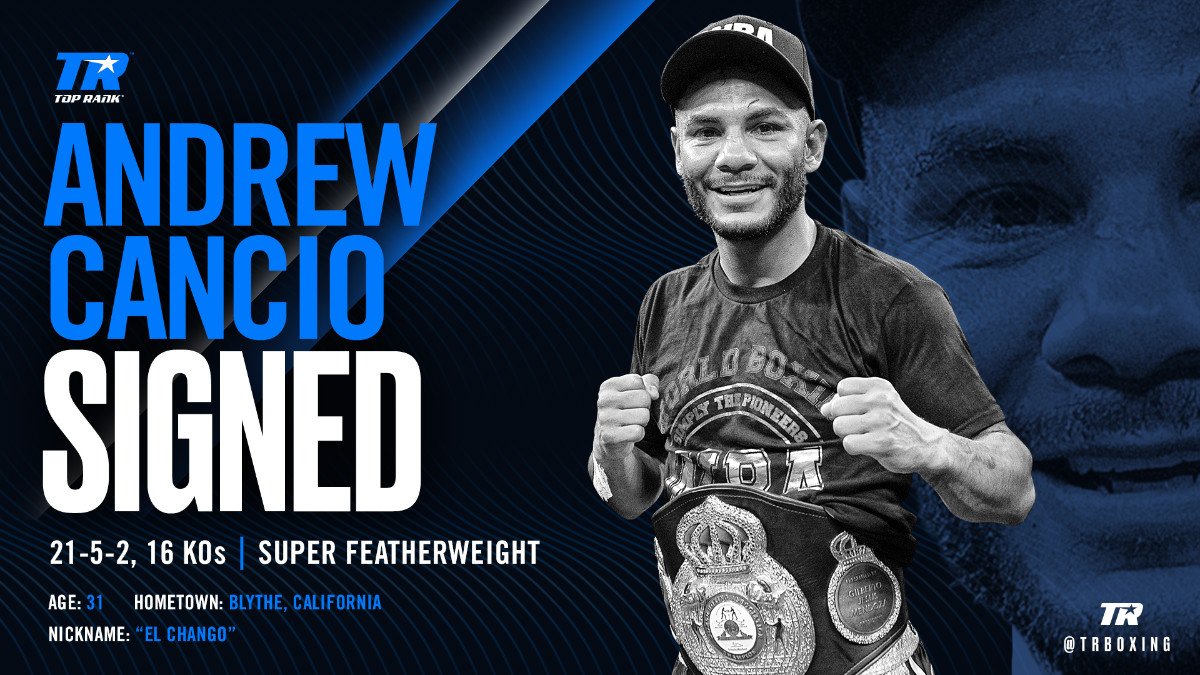 Former WBA super featherweight world champion Andrew Cancio, the working man’s hero who reached the pinnacle of the sport, has signed a multi-fight promotional contract with Top Rank. Cancio, who still holds down a full-time job at Southern California Gas Company, is expected to make his Top Rank on ESPN debut in April.

“Andrew Cancio is one of the very best fighters at 130 pounds, a hard-working young man who deserves another opportunity to fight at the sport’s highest level,” said Top Rank chairman Bob Arum. “He was a free agent, miraculously, and we didn’t hesitate to make a deal with him and his team.”

“I’m very grateful to begin the next chapter of my career with Bob Arum and the entire Top Rank team in my corner,” Cancio said. “I look forward to returning to the ring in front of my army of supporters and am fully prepared to fight my way towards becoming a world champion again. Thanks very much to my team, particularly my manager, Ray Chaparro, who has always believed in me and has been incredibly supportive of my career and instrumental in the success I’ve achieved.”

Said Chaparro: “Andrew and I are honored to join Top Rank as we move forward towards the rest of his career. I’ve known for a long time that Andrew is a world-class fighter and am very happy to begin working with Bob Arum and his outstanding team on our march towards another world title. I’d specifically like to thank Top Rank matchmaker Brad Goodman, who has worked diligently to welcome us to Top Rank. We both look forward to working closely with him in the future.”

Top Rank has a lot of options for Cancio

Cancio is one of the sport’s top regional ticket-sellers, as he routinely draws sold-out crowds to the Fantasy Springs Casino in Indio, Calif., a 90-minute drive from Blythe. After the Alvarado defeat, Cancio was released by his previous promoter, paving the way for him to sign with Top Rank. WBO world champion Jamel Herring, WBC world champion Miguel Berchelt, former featherweight world champion Oscar Valdez, former two-weight world champion Carl Frampton and former world champion Masayuki Ito are Top Rank-signed fighters who currently campaign at 130 pounds, leaving Cancio with a plethora of options as he resumes his career.