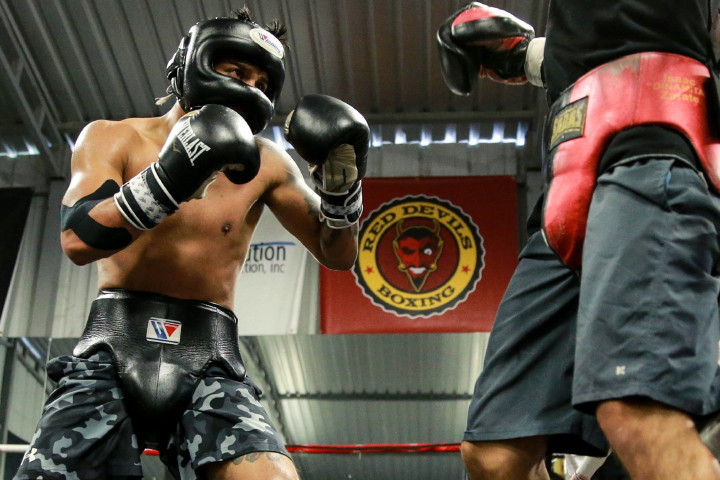 December 10 marks a pivotal year for Abner Mares, the highly respected former three-division world champion. It marks over one year since fans saw him enter the ring on television and one year since the newly formed partnership of Mares and revered trainer Robert Garcia. It is a transformed Mares that will enter the ring on Saturday, December 10 when he takes on current WBA Featherweight World Champion Jesus Cuellar in a Premier Boxing Champions live event on SHOWTIME® (10 p.m. ET/7 p.m. PT) from Galen Center at USC in Los Angeles.

Tickets are on sale now at www.galentix.com . The live event is promoted by Ringstar Sports and TGB Promotions and presented in association with Premier Boxing Champions.

This fight is a road marker in a long and successful career for Mares as well as Garcia, who has trained numerous world champions at his two Robert Garcia Boxing Academy gyms in Oxnard, Calif., and Riverside, Calif. With Mares named one of the top five fighters in California by the Los Angeles Times, both are looking to earn and take home another coveted world championship in the featherweight division.

Q&A with Abner Mares:
You haven’t fought in over a year, but you’ve been in the gym consistently during that time. What has this last year been like for you?

“It’s been really tough not being able to fight this whole year. We’ve been training and staying active the whole year even after my two fights got cancelled. I did full training camps for each fight. Things happen for a reason. I’m with a new coach in Robert Garcia and this year has only helped us get even more ready for this fight and helped us get to know each other as trainer and fighter. Yes, it has been frustrating, but you have to look at the bright side.”

You’ve won three world titles in your career and now you’re fighting for a fourth with Jesus Cuellar. How driven are you to keep winning titles at this point in your career?

“I’m still hungry for more. Once you lose that hunger, you don’t accomplish anything. I’ve been hungry for quite some time now — hungry to prove to people and myself that there’s a lot left in Abner Mares.”

After a year with Robert Garcia, what differences in your approach and style might fans notice in the ring on Dec. 10?

“The word I’m using for this camp to sum up what I’ve done with Robert is ‘wise.’ I’m being wiser in there; he’s having me think more in there. That’s pretty much what I’ve learned with Robert. The patience he’s had, that’s what I’ve respected with him. We’ve been together a year and haven’t fought, and any other coach might start to get desperate. But he’s been patient.”

How do you see yourself fitting in right now in the big picture of a currently loaded featherweight division?

“I try not to get ahead of myself, obviously. Just the simple fact that there are big names in this division gets me excited. Just knowing that my name is still there as one of the respected featherweights says a lot, too, and makes me happy. But it’s one thing for other people to say it, and it’s another thing to prove it. That’s what I’m going to do December 10 — prove that I’m still elite and can make a big bang.”

What has this last year been like for you working with Abner? It’s rare to see a trainer and fighter pair together more than a year before getting a chance to step into the ring for a fight.

“I’m a strong believer in things happening for a reason. With the fight date continuing to get pushed back that means this is pretty much our fourth training camp together, but I think it’s actually benefitted us. It gave us more time to get to know each other. It’s always better to know your trainer, know how he works. That way, you’re comfortable, and I think that’s a big benefit. Fighting a big, championship fight against a solid champion, it’s given us more time to learn from each other and better prepare ourselves for this fight.”

What’s stood out to you the most about now working with Abner after seeing him from a distance over the years?

“I remember Abner from the Olympics in 2000 and from the first part of his professional career, fighting locally. Following his style, it was a style that I admired. I liked his in-and-outs, he showed he was very skillful. When he became champion and started fighting big names, he became a crowd-pleaser, which fans love, when a fighter comes and gives the crowd what they want to see. But I think Abner still has those skills to still be a crowd-pleaser, but also be able to show that style he showed early in his career. He’s always been a smart fighter with good speed, good power and his footwork is also very good.”

What makes this fight – Cuellar vs. Mares – a special fight?

“It’s a special fight because it’s not an easy fight. We’re fighting probably the strongest of the division. He’s very strong physically and he’s a world champion. That makes the fight, for us, a little more interesting. We’re not fighting for any vacant title – we’re fighting a solid champion. I know him because I’ve trained him. It’s challenging for myself, knowing I made him a world champion and now I have a chance to take the title from him. It’s already a challenge, and now he’s training with Freddie Roach, so that makes it even more challenging.”

The hard-hitting Cuellar of Argentina and the decorated Mares of Southern California shared some fun facts and spoke about their interests outside of boxing before they lace up the gloves and meet in the center of the ring on December 10.

Read below to learn more about the two fighters before their main event showdown:

1. If you could have one super power, what would it be?

It would be super strength. My nephew already calls me The Incredible Hulk.

2. What is something that people would be surprised to know about you?

I’m a very good cook. I can cook lots of things for myself. I love cooking for my family.

3. What is your favorite snack?

A torta dulce, a sweet sandwich served in Latin American countries throughout the world.

5. What do you do for extra motivation?

I watch the movie “300” during training and before fights.

6. What is your favorite book?

7. If you weren’t a boxer, what would you be doing?

I would want to be a horse jockey. Their job is very interesting. My body would look a lot different, but I think I could be good at it.

8. What is one of your most impressive physical feats?

9. Do you have any fight night superstitions?

It’s not really a superstition, but I wear red and white in the ring during every fight.

10. If you could have dinner with one historical figure who would it?

It would be former unified middleweight world champion and Argentine legend Carlos Monzon.

1. What’s something people might be surprised to learn about you?

I’m a ‘dance dad.’ My oldest daughter Emily is on a dance team that went to the national championship in Connecticut when I fought Leo Santa Cruz. We stopped the workout at the track and the entire team huddled around my iPhone to watch her. It made me really proud – she did really well! She has her winter recital on the night of the fight, but I’m hoping to watch part of it on Facetime while I’m in the locker room.

2. What is a guilty pleasure you have?

It’s definitely my collection of sports cars. I call it my ‘auto wardrobe.’ My favorites are the different Mercedes I have.

3. What’s the most extravagant thing you own?

I wrapped one of my Mercedes in pure gold. That would have to be it.

4. Do you have any business endeavors outside of boxing?

My wife and I just opened up “Nathalie’s Essence of Beauty.” It’s a full service makeup salon in Downey that I’m excited to see grow.

Olives. I’ve never liked them and I never will.

7. What is your ideal birthday present?

The one thing my friends always get me that I love is cologne. I have cologne from all different brands from all over the world. I like smelling good.

8. What is your favorite snack?

Definitely a Snickers bar. They’re another guilty pleasure, but not during training camp.

9. If you could have dinner with one historical figure, who would it be?

I would say Pablo Escobar. He’s a guy I couldn’t pass up meeting.

I would want to be an architect. I love the art, structure and function of buildings – homes and offices. From the design, to the way it’s used, it’s something I’m very interested in.