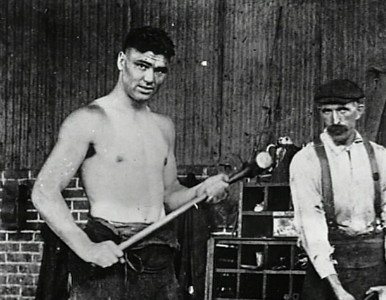 A full century ago today, when fighting on the day that is so important to all of America, Jack Dempsey, a man to soon become known the world over as “The Manassa Mauler,” was a 24-year-old tough guy of a contender hungry for the crown and the riches that would come with being world heavyweight champion.

The much taller Jess Willard was the defending heavyweight king and the easygoing champ was about to have his title ripped from him in utterly ruthless, even shocking fashion. Underneath the scorching hot sun on the day of celebration, a savage performance was witnessed by Dempsey, one that is still stunning to watch a full hundred years later.

Surely every fight fan with even a slight interest in the history of boxing has seen the grainy footage of this one-sided slaughter of a fight. And after having watched it, after having seen how the stalking, bended at the waist challenger smashed the surprisingly hapless Willard to the mat no less than seven times in the fight’s opening round, the viewer cannot fail but to recognise how splendid a fighter Dempsey really was in his prime.

Amazingly, Dempsey was an underdog going into the big fight, based largely on the fact that he was pretty small in comparison to Willard (6’1″ and approx 187-pounds to 6’6.5″ and approx 245-pounds for the champ). But Dempsey, with his aggressive style, his ruthless punching ability and his crouching attacking approach, put on a literally breathtaking performance – one that is generally credited with taking heavyweight boxing into the modern era.

Shocking fans with his raw, animalistic savagery, Dempsey changed everything. The first heavyweight that looked like he might actually want to kill his opponent, Dempsey had to be seen to be believed.

After having despatched Willard at the end of the third-round, when a battered and broken (literally, big Jess’s cheekbone and a number of his ribs having been cracked) former champion refused to come out for the next round, Dempsey went on to become a star and a hero.

It took time for the latter tag to be put on Dempsey due to the accusations of his draft dodging during World War I, but after his stunning July 4th victory, Dempsey was boxing’s newest star and top attraction.

In more recent years, Dempsey’s impact on the sport has been no less great. Fighters such as Mike Tyson, when on his own way to the top, spoke in glowing tones of how Dempsey meant so much to them. Dempsey only defended his title successfully five times, eventually losing his crown to Gene Tunney in 1926, but his legend is as strong as any other heavyweight champion’s in history.