Fight fans can look forward to a solid card on Saturday night from Tulsa, Oklahoma. Top of the bill will be the guaranteed slugfest that … read more “Trey Lippe Morrison Back In Action Saturday, Will Face Jason Bergman” 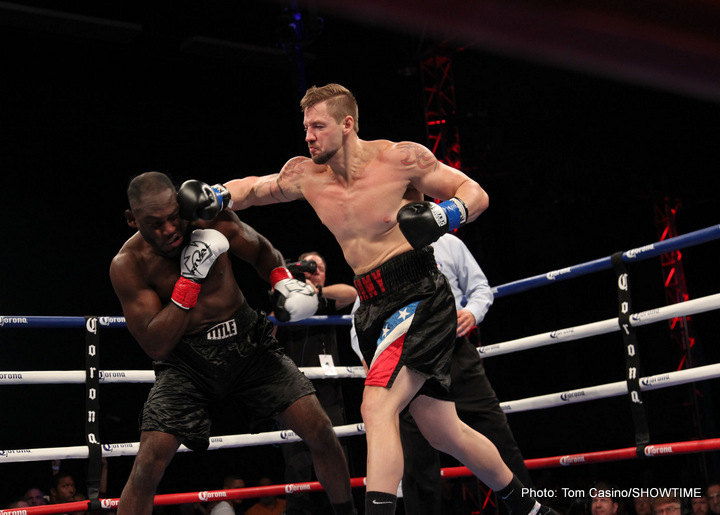 Tonight on the Gilberto Ramirez-Roamer Alexis-Angulo super-middleweight title fight card, 28 year old Trey Lippe-Morrison will be in action. Son of the late Tommy Morrison, … read more “Heavyweight contender Trey Lippe-Morrison in action tonight: My whole following is because of my dad”

NEW YORK (Feb. 1, 2017) — Undefeated heavyweight Trey Lippe Morrison suffered a cut over his left eye while sparring on Tuesday at Wild Card Gym in Los Angeles and is unavailable to fight on next Friday’s ShoBox: The New Generation telecast.

“I’m very disappointed for Trey because this is the best camp that we’ve had together,” said trainer Freddie Roach, who was in his sixth camp with the undefeated heavyweight. “Trey should be healed and back in the gym in three or four weeks to come back stronger than ever.”

Headlining in front of a standing room only crowd in his adopted hometown of Miami, OK, Baranchyk battled game Phoenix native Wilberth Lopez over ten rounds. Lopez, who defeated five previously unbeaten foes, had to deal with the ultra-aggressive style of Baranchyk but scored a flash knockdown in the fourth round. The knockdown, his first suffered as a pro, had little impact on the fight. For the rest of the contest, the IBF #12 ranked Baranchyk overpowered Lopez, who was on the receiving end of many hard shots but finished the bout on his feet.

Headlining in a ten round contest, Baranchyk’s fighting his fourth consecutive bout at the Buffalo Run, where he is an adopted fan favorite. Raised in Russia and fighting out of Brooklyn, NY, Baranchyk is 12-0 with 10 wins by knockout. In his most recent bout, Baranchyk clearly outpointed crafty Zhimin Wang on ShoBox over ten rounds to capture both the USBA and WBC USNBC championships.

Currently carving out his own name as a heavyweight contender is Trey Lippe Morrison, son of the late Tommy Morrison. The unbeaten 27-year-old is now 12-0(12) and Morrison is coming off an impressive one-round stoppage win over Ed Latimore. The Latimore fight, which was Morrison’s Showtime debut, was supposed to be his toughest test to date in a pro career that began in February of 2014, instead Morrison got the September fight done and dusted in quick time.