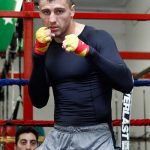 Q&A With Roy Jones Jr.
Roy Jones Jr Prepares Isaac Chilemba to Face Oleksandr Gvozdyk on November 19
Pensacola, Florida: As Isaac “Golden Boy” Chilemba (24-4-2, 10 KOs) prepares to attempt to reclaim the NABF Light Heavyweight Title from Oleksandr “The Nail” Gvozdyk (11-0, 9 KOs) live on the Kovalev-Ward “Pound For Pound” HBO Pay-Per-View undercard from T-Mobile Arena in Las Vegas, Nevada he will have former four-division world champion Roy Jones Jr. in his corner for the first time. Below Jones assesses the match-up and his observations of the young Malawi native:

Oleksandr “The Nail” Gvozdyk (11-0, 9 KOs) is prepping for his upcoming fight with Isaac “Golden Boy” Chilemba (24-4-2, 10 KOs) for the NABF Light Heavyweight Title on the Kovalev-Ward “Pound For Pound” HBO Pay-Per-View televised undercard, live from T-Mobile Arena in Las Vegas.

Training for this upcoming bout with Chilemba, Gvozdyk has been in camp with Sergey “Krusher” Kovalev and had this to say about his preparation for this mega-fight: 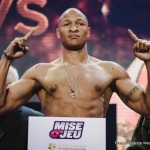 Isaac “Golden Boy” Chilemba (24-4-2, 10 KOs) will return to the United States on Saturday, Nov. 19 to face dangerous light heavyweight prospect and NABF Light Heavyweight Champion Oleksandr “The Nail” Gvozdyk (11-0, 9 KOs) in a ten round bout as part of the Kovalev vs. Ward “Pound for Pound” pay-per-view telecast live from the T-Mobile Arena in Las Vegas, NV. The bout will be presented by Main Events in association with Top Rank. The event will be produced and distributed live by HBO Pay-Per-View beginning at 9:00 p.m. ET/6:00 p.m. PT.

Chilemba, 29, a native of Blantyre, Malawi fighting out of Johannesburg, South Africa, is coming off a hard-fought loss against WBO, WBA and IBF Light Heavyweight World Champion Sergey “Krusher” Kovalev. Isaac holds the impressive distinction as only the second fighter in Kovalev’s career to go the full 12 rounds. The only is future Hall-of-Famer Bernard “The Alien” Hopkins. In doing so, Chilemba managed to raise more than a few eyebrows among boxing fans and media. 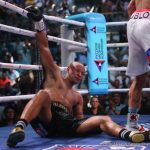 The hard-fought battle between Kovalev and Chilemba was non-stop action from bell to bell. Kovalev came out of the gates guns blazing but the tough Chilemba took every punch handed out by the hard-hitting champ. The toughest round for the 29-year old Chilemba was the 7th when he was knocked down by the Krusher. 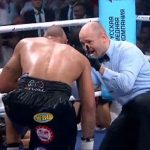 Tonight in Russia we came away with two overwhelming thoughts: no wonder Isaac Chilemba has never been stopped, and Andre Ward will be feeling quite happy right now.

IBF/WBA/WBO light-heavyweight king Sergey Kovalev retained both his belts and his unbeaten record against Isaac Chilemba, but, boy did he have a tough/awkward night’s work in doing so. The final scores of the three judges – 118-109, 116-111, 117-110, all for “Krusher” do not tell the full story. Kovalev, now 30-0-1(26) still moves ahead to his big November fight with Andre Ward, but Chilemba, now 24-4-2(10) sure gave Ward plenty of pointers. 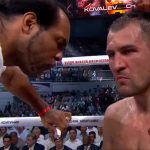 IBF/WBA/WBO light heavyweight champion Sergey “Krusher” Kovalev (30-0-1, 26 KOs) fought in a controlled and relaxed manner on Monday night in beating the 29-year-old Isaac Chilemba (24-4-2, 10 KOs) by a 12 round unanimous decision at the DIVS Palace of Sports in Ekaterinburg, Russia. Kovalev put Chilemba on the canvas in the 7th, and came within an eyelash of getting a knockout in that round. It looked like Kovalev took it easy on Chilemba until pouring it on in the last minute of the 12th round. Kovalev suddenly came alive and was punishing a badly hurt Chilemba as the fight ended. Chilemba’s nose was bleeding and he looked in bad shape. The question is did Kovalev take it easy on Chilemba to get rounds in so that he could get practice for the Andre Ward fight coming up? It sure looked that way to me. 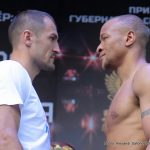 The fight is a 12-round light heavyweight title bout, featuring Sergey Kovalev defending his unified titles against Isaac Chilemba. 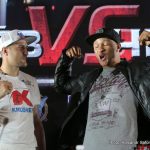 On a special night, one of the sport’s top performers defends his unified light heavyweight titles when WORLD CHAMPIONSHIP BOXING: SERGEY KOVALEV VS. ISAAC CHILEMBA is presented MONDAY, JULY 11 at 10:15 p.m. (ET/PT) from the DIVS Palace of Competitive Sports in Ekaterinburg, Russia, exclusively on HBO. The HBO Sports team will call all the action, which will be available in HDTV, closed-captioned for the hearing-impaired and presented in Spanish on HBO Latino.