HBO’s hit late-night boxing franchise visits Omaha, Neb. for the first time to present an all-action doubleheader featuring a world title bout between undefeated rising stars when HBO BOXING AFTER DARK: TERENCE CRAWFORD VS. YURIORKIS GAMBOA AND MATT KOROBOV VS. JOSE UZCATEGUI is seen SATURDAY, JUNE 28 at 10:00 p.m. (live ET/tape-delayed PT) from CenturyLink Center, exclusively on HBO. The HBO Sports team will be ringside for the event, which will be available in HDTV, closed-captioned for the hearing-impaired and presented in Spanish on HBO Latino.

World Championship Boxing returns to Omaha for the first time in 42 years! Undefeated world champions TERENCE CRAWFORD, the Pride of Omaha, and Cuban sensation YURIORKIS GAMBOA, who boast identical 23-0 (16 KOs) professional ring records, will be battling for Crawford’s newly-won World Boxing Organization (WBO) lightweight title This Saturday! June 28, at the the CenturyLink Center in Omaha (455 North 10th St., Omaha, Neb. 68102). This will be the first world championship fight Omaha has hosted since Joe Frazier successfully defended his heavyweight title against Nebraska’s-own Ron Stander on May 25, 1972. It will also be a professional homecoming for Crawford, who has not fought in his home state since 2011. The fight will be televised live on HBO Boxing After Dark®, in its first-ever visit to Omaha, beginning at 10:00 p.m. ET/PT. The telecast will open with undefeated Top-Five contenders MATT KOROBOV and JOSE UZCATEGUI battling in a 10-round rumble for the vacant WBO Inter-Continental middleweight title. 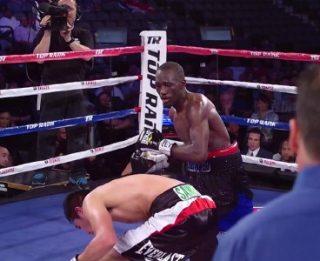 “This is what I always wanted to do, make my first world title defense in Omaha where I grew up,” said Crawford. “As soon as this fight was announced my phone and Facebook lit up. Everyone wants to be at this fight. This is extremely exciting, something I always dreamed about. Gamboa is fast and he hits with power. This is a serious fight. I fought and beat a lot of great fighters as an amateur.

” I was at 132 pounds then and Gamboa, as an amateur, was 112. But now we are about to go at it. I plan to train in Colorado Springs. During fight week, I will be away from the main fight hotel. It’ll be me and just my team to be by ourselves in the final days leading to the biggest fight of my life. It’s been a long ride to get here but at last my dream has come true. This will be a great action-packed fight.” Top Rank promoter Bob Arum is reportedly hoping to put together a fight between #1 WBA, lightweight contender Yuriorkis Gamboa (23-0, 16 KO’s), and his own fighter #1 WBO, Terence Crawford (21-0, 16 KO’s) as the co-feature on the Miguel Cotto vs. Delvin Rodriguez card on October 5th, according to Dan Rafael of ESPN.

The Cotto-Rodriguez fight isn’t done yet, but that’s the one they’re working on putting together for Cotto.

Arum said to Dan Rafael at ESPN “I’d like to make him [Crawford] with Gamboa.”