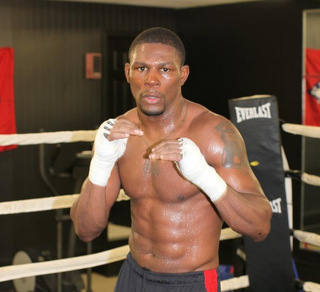 New York, NY (3/30/2012) – On Friday April 20, DiBella Entertainment, in association with Golden Boy Promotions, will present a special edition of ShoBox: The New Generation when former undisputed middleweight champion Jermain “Bad Intentions” Taylor (29-4-1, 18 KO’s) looks to take another step toward reclaiming the middleweight championship when he takes on the undefeated Caleb “Golden” Truax (18-0-1, 10 KO’s) in a 10-round middleweight matchup. SHOWTIME® will begin live coverage starting at 11 p.m. ET/PT (delayed on the West Coast).

Taylor, who made his successful return to the ring in December on ShoBox after a nearly two-year layoff-scoring an eighth-round TKO over the tough-as-nails Jesse Nicklow-barely took any time off before returning to camp with longtime trainer Patrick Burns. Burns is the man responsible for guiding Taylor from the 2000 Olympics to the undisputed middleweight championship, which he won by dethroning future hall-of-famer Bernard Hopkins in 2005. After an unsuccessful bid in the super middleweight division, Taylor has reunited with Burns as he makes another run toward the middleweight championship. Already Taylor is ranked #6 by the WBO and #9 by the WBC..

“This has been another great camp and I am really looking forward to this fight,” said Taylor. “This is the new-old Jermain. I am back to working really hard, and I am really focused. This fight is another step toward regaining my championship. My body feels great. I know what it takes and what I have to do to become champion again, but first I need to take this kid’s (Truax) zero. I was praying the other day and God told me to go in there and kick this kid’s butt, and that’s exactly what I plan on doing. It is time to either put up or shut up.”

“I couldn’t be happier with the way Jermain has been looking,” said Burns. “He hardly took any time off after the last fight, only about a week and he showed up in camp at 170 lbs. He was already in shape, so we didn’t have to kill ourselves to make the weight, we were able to spend our time just focusing on his training and fine tuning some things. We are three weeks out from the fight and Jermain is already in tremendous shape, as good, if not better than when I had him fighting Hopkins.”

Regarding Taylor returning to world championship level, Burns is very pleased with what he sees. 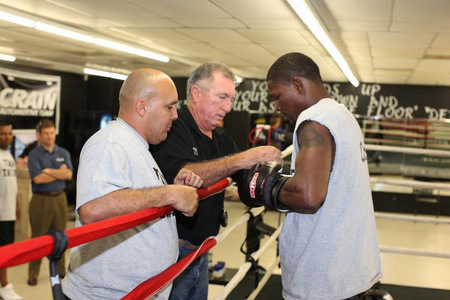 “Jermain is pretty close to where he needs to be,” said Burns. “We are very focused going into this fight as we know how important a fight this is for him. I am looking for Jermain to pick up where he left off in the later rounds of his last fight, and go out there and put on an impressive performance. We are not underestimating this kid by any means. There is no sense in looking down the road until we take care of the challenge that is standing right in front of us. That being said, the things Jermain has been doing in this camp are absolutely unbelievable and I know he is going to impress a lot of people on April 20.”

“A few years back, Jermain Taylor was one of boxing’s biggest superstars and most talented athletes,” said promoter Lou DiBella. “He had skill and heart as well as being a premium cable star and PPV attraction. Caleb Truax represents an appropriate next step in giving Jermain the best opportunity to pace himself and get back to where he once was. I am confident that with Jermain’s determination and Pat’s help, that Jermain Taylor will have a terrific showing on April 20.”

The special edition of ShoBox: The New Generation is promoted by DiBella Entertainment in association with Golden Boy Promotions. The main event features former disputed middleweight champion Jermain “Bad Intentions” Taylor (29-4-1, 18 KO’s) taking on the undefeated Caleb “Golden” Truax (18-0-1, 10 KO’s) in a 10-round middleweight matchup. In the co-featured bout of the evening, former Cuban amateur star Erislandy Lara (15-1-1, 10 KO’s) takes on Ronald Hearns (26-2, 20 KO’s) in a fight originally scheduled for February 11 as the co-feature to Victor Ortiz vs. Andre Berto II, but that was postponed after a Berto injury caused a postponement of the event. SHOWTIME® will begin live coverage starting at 11 p.m. ET/PT (delayed on the West Coast).

A complete list of undercard bouts will be announced shortly. Tickets, priced at $150, $100, and $50 plus tax and service charges, are available online at www.beaurivage.com, by phone at (888) 566-7469, or in person at the Beau Rivage Theatre box office. Beau Rivage room reservations can be made by calling (888) 567-6667 or visiting www.beaurivage.com.