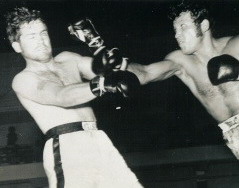 By Ted Sares: In the past, I have written about cuties like Jimmy Young and Jersey Joe Walcott, bombers like Bob Satterfield and Cleveland Williams and closers like Sugar Ray Leonard and Khaosai Galaxy. But what about spoilers, you know, a boxer who derails a potential contender or favored contender and thwarts his chances, at least temporarily, of staying hot or even winning a championship; a guy who has a style that negates the obvious talents of his favored opponent?

Had Kevin Howard beaten a come backing Sugar Ray Leonard, he would have been a spoiler. He had so nicknamed himself. Gene “Mad Dog” Hatcher spoiled many a streaking boxer’s record– something to which Joe Manley, Alfredo Escalera, and Johnny Bumphus can all attest. Mike “The Bounty” Hunter certainly did some serious spoiling as Jose Maria Flores Burlon, Jimmy Thunder, Pinklon Thomas, Dwight Muhammad Qawi, Oliver McCall, Alexander Zolkin and Buster Mathis Jr. will verify. When Jimmy Young derailed George Foreman, he was a both a “cutie” and a “spoiler..”

When Tommy Morrison was upset by Michael Bentt in 1993 thus depriving the “Duke” of a hugh payday against Lennox Lewis, some called Bentt a spoiler, but one upset does not make a spoiler. No, a spoiler in my view must have a propensity to pull off upsets with a discernable degree of regularity while still remaining at a lower level than those he beats. Of course, when a fighter has a large number of “upsets” during the course of his career, that is quite another story.

Emanuel Augustus (previously Burton) fills the bill as he upset Courtney Burton, Ray Olivera, Alex Trujillo (a prospect with a 23-1 record), Carlos Wilfredo Viliches 37-1-2 (Augustus took the fight on 2 days notice), and Mike Griffith (who gave Paul Spadafora all he could handle). He also beat Terrel Finger, 21-0, whom he KOd in 8, Fred Ladd, 45-1, coming in, Soren “Mr. Perfect” Sonderrgrad, 38-1, (the fight was ruled a draw though most thought Augustus had won), and David Toledo, 25-1 at the time. Quite an impressive list, indeed.

In 78 bouts, he finished with a 47 (KO 34) – 26 (KO 7) – 5 record and was always an exciting performer who gave the fans more than their money’s worth. His thundering right hand always posed a threat, regardless of how highly regarded his opponent was.

There are many others who were representative. Guys like Bostonian Bob Benoit, 37 -8, and Mike “Hercules” Weaver, 41-18-1. Ted Sanders, 10-15-4, who beat highly regarded Mickey Goodwin, 17-0 and iced a streaking Alex Ramos, 15-0, among others was a prototype as was my favorite spoiler, Darryl Pinckney.

Before he took a deep slide south starting in 1997, “The Nightmare,” 21-21-2 at the time, was the quintessential spoiler when he shocked and stopped undeafted Guty Espadas Jr. in 1996. A year earlier, he KOd undefeated Louie Leija.

He lost 21 of his last 24 fights including 12 at the tail end and finished with 24-42-3 record, but he had plenty to brag about with some early, high profile surprise wins–all by clean stoppage and all against heavily favored fighters coming in.

In many instances and like Freddie Pendleton, he was able to level the playing field over more obviously talented opponents. He spoiled expectations. Darryl Pinckney was a spoiler extraordinaire.