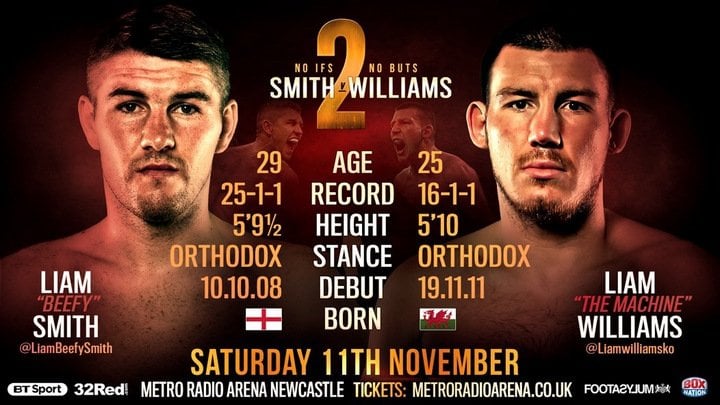 Clydach Vale clouter Liam Williams insists bitter rival Liam Smith is suffering from delusion as they embark on their spicy looking ‘No Ifs, No Buts’ rematch at Newcastle’s Metro Arena on Saturday week, broadcast live on BT Sport and BoxNation.

The pair renews bitter acquaintance in a WBO Super-Welter eliminator seven months after a spiteful initial encounter in which the wounded Welsh warmonger was withdrawn after nine on medical advice, whilst ahead on all three scorecards.

‘Smith has been very dismissive of me since the last fight but I guarantee I earned his respect. What he rants publically and what he knows in his mind are two completely different things,’ claims the reigning British champion who has lost just once in 18.

‘I think I’ve got to him. Going in, I don’t think he could see himself getting beaten and he’s become utterly deluded. Now he knows the level of skill I bring. He knows the difference in class between us that I displayed for everyone to see in our first fight.

‘I’m one of the small percentage of fighters who doesn’t feel insecure about praising an opponent and Smith deserves credit for what he’s achieved in the sport.

‘He’s a class operator but he brought nothing that we didn’t expect. Sure, he was coming on strong at the end but we’d prepared for that.

‘Besides, it was only after the head clash in the ninth that I began to fall apart. Earlier in the round, I was doing okay. Smith is the worst kind of bully and pounced on my vulnerability.’

The Anglo-Welsh antagonists are unlikely to ever share Christmas cards and, one senses, their mutual dislike extends beyond the competitive one-upmanship of the sporting arena.

But while the rumbler from the Rhondda has history as a hothead, he insists he shall maintain a calm countenance in the presence of serial smack talker Smith when the pair finally come face-to-face again in fight week.

‘Everyone knows that he’s the fiery one of the brothers but, this time, there’ll be no bad lip or aggression from me at the press conference or weigh-in. That’s all in my past,’ he says.

‘In recent gym spars, there’s been a few people who’ve tried to drag me into conflict situations but I’ve retained focus, remained professional. That might not have been the case 12 months back. I’ve matured. I know I’m a role model to some and I’ve kids myself. I don’t want to come across as a bad guy because I’m not.

‘I believe I retained my dignity and came out of the first fight with a lot of respect as a person. Smith showed his true colours and has lost a lot of neutral fans because of that.’

Gallagher To Williams: “Karma Is A B*tch”

The two Liams go to war again at Newcastle’s Metro Radio Arena on November 11 in a final eliminator for the WBO super-welterweight title, currently held by Miguel Cotto.

When the feuding fighters met in an ‘interim’ world title clash seven months ago, Smith won when a clash of heads forced badly cut Williams to be pulled out by trainer Gary Lockett after nine rounds.

Smith also suffered an X-rated cut when he was butted in round three and Gallagher insists it’s a case of what goes around comes around for the Welshman.

Williams claimed earlier this week that Smith should have been disqualified for the clash that ended the fight in Manchester.

Gallagher fired back: “Liam Smith went through everything in the first fight — cut, elbows, head butts. But he stuck in there even though he was behind. He had belief he could turn it around and did.

“Not enough credit was given to the solid, old school performance he gave. It was all negativity.

“Look at Liam Williams putting the head in on Liam Smith and that (the cut) wasn’t the first time in the fight. He did it all the time.

“He did it years ago with Ronnie Heffron. He did it with Gary Corcoran and karma is a bit of a bitch.

“You can’t go around elbowing and butting people all the time and think you can get away with it.”

Gallagher has admiration for the Welshman’s trainer Gary Lockett, but believes the British champion will be reluctant to have another war with his Liverpool enemy.

Gallagher added: “It was a real gritty performance from Liam Smith. They have had their chance to beat him and they are not going to beat him with pitter-patter stuff running around the ring.

“I know they talk about Liam Williams standing and having a fight, but he isn’t going to do that. He is going to run and it will backfire.

“Judges won’t score for him when he tries to nick a fight like that. They score for aggression when Liam Smith tries to make the fight.

“Liam Williams isn’t going to stand and have it with Liam Smith. He is going to box on the back foot and try to make it do a Hughie Fury v Joe Parker type of fight – not win it, but nick it.

“I have huge respects for Gary Lockett. He is good coach and knows his stuff. I am just giving my opinion when I’m asked what Liam Williams is going to do in Newcastle.”

Williams: “That Butt Was No Accident And Smith Should’ve Been Disqualified!”

The 25 year old reigning British champion flew out of the starting blocks and was ahead on all three judges’ cards when that ‘Big Bang’ occurred late in round nine.

‘Heads had been bumping all night and you train to get your head into the right place so that, if and when that happens, you incur minimal damage,’ says the man from the Rhondda who conceded on his stool after 16 wins and a draw.

‘But I definitely felt the final butt was deliberate. Smith feinted with the jab to pave the way for his nut. It was no accident.

‘One million percent Smith should’ve been disqualified. I felt very let down by the referee (Terry O’Connor). I feel he robbed me of my unbeaten record and chance to become world champion. I can’t see how he possibly missed such a blatant butt.

‘Earlier in the fight, Gary (Lockett, his trainer/manager) had called him over to complain about Smith’s head but he just shook his head and told us to ‘Get on with it’?!’

Ahead of their salivating and no doubt spite filled rematch at Newcastle’s Metro Arena on Saturday week, Williams is quick to remind fight folk that the concluding ‘collision’ had nothing to do with the Scouser’s fists or supremacy as a boxer.

‘It was the decision of the doctor and Gary to withdraw me,’ he stresses.

‘When the cut happened, the blood streamed into my eye and my vision was one big blur. There were two cuts side by side on my eyelid with the tiniest bit of skin holding them together. If I’d taken a couple more blows on the injury my eyeball could’ve been exposed. I knew it was bad from the pain I was in. It took eight stitches and a lot of glue to patch me up.

‘I fully respect that decision but, look, I’m a fighter and 100% I’d have continued if allowed. Sometimes us fighters need saving from ourselves. I’m a young man with a family. You come out healthy and live to fight another day.

‘Smith’s got some front saying that he was cut earlier in the fight (round three) but continued whereas I ‘spewed it’ the moment I started bleeding. You can’t compare the cuts; totally different scale and location. It just shows how ignorant he is!’

‘If he wants to make the rematch nasty, we’ll make it nasty. This time I’ll do anything to win!’