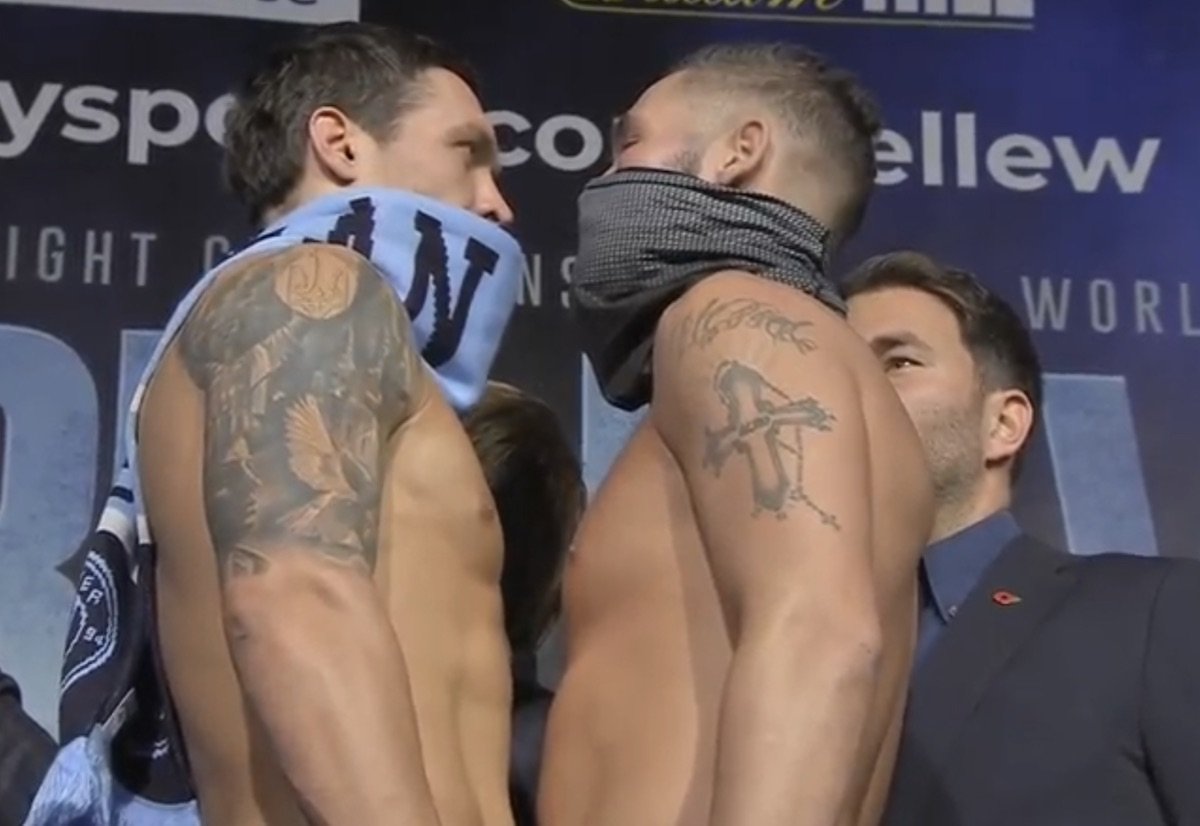 The prelude to any Tony Bellew fight is a familiar ritual. It is always the Bomber contra mundum. Whether it’s the animosity he likes to foster between himself and an opponent, or pig headed stubbornness to acknowledge the odds, he thrives on a war mentality. That approach is as much commercial as psychological- the Bomber has become very adept at raising the profile of his fights by utilising his vocal talents, which are every bit the equal of his fistic ones.

Yet that belligerent intensity is lacking in the build up to his fight tonight with Oleksandr Usyk in Manchester. No doubt this is partly due to a sincere admiration that exists on his part for the Ukrainian. Bellew and Dave Coldwell have in fact been among his most prominent cheerleaders. The duo formed the commentary team for his breakout fight against Glowacki in Poland, the bout that set him on the path to absolute domination at cruiserweight. A pitch perfect performance saw him win every round and relieve the Pole of his belt in front of his home crowd. And this to the soundtrack of lyrical praise from the two men who have made it their mission to unseat him. Since that night Usyk embarked on an epic tour of various European capitals, challenging local champions and former champions and defeating them on their turf. Marco Hook in Berlin, Mairis Briedis in Latvia, and finally Murat Gassiev in Moscow. And now he enters the lion’s den once more in Manchester.

The fruits of all those fights in the amateur ranks are there to see every time the bell rings for Usyk, but what is every bit as important, is the pure competitive spirit that he has brought with him from there. That the best face the best, regardless of time and place is just axiomatic to him. There is no tedious a-side b-side percentage split guff clouding his mind. That he espouses this and his constant willingness to concede territorial advantage is remarkable, and even more remarkable is the fact that he is yet to fall foul of boxing’s notorious venality.

But getting down to brass tacks, what are the Bomber’s prospects of victory? My answer to that question is, they are significant. He is more likely on balance to be the loser of tonight’s bout but his chances are far from negligible. Leaving aside the aura that has grown up around the Liverpudlian, namely, that he’s the underdog who keeps winning despite the odds, he has abilities and attributes the Ukrainian would do well to be aware of. He is fast, intelligent, defensively responsible and a concussive puncher, particularly with the left hook. Added to that is the fact that he has a very shrewd tactician in his corner with Dave Coldwell. Together these two men are second to none in their ability to appraise opponents. They took an informed gamble on Haye not being the force he once was, and they were right. They’ve had their eye on Usyk for a while too. They do not blindly roll the dice.

The best way to think of Bellew’s advantage in this fight- aside from his home advantage- is in terms of Orland Salido v Lomachenko and Ward vs Kovalev. Usyk, has less experience as a professional than Bellew. He comes from a background of mostly amateur boxing. As Bellew pointed out though, he has a number of WSB bouts under his belt, which are professional bouts in all but duration. But still, he has been coached by Ukrainians, masters of amateur boxing but not as well known for their professional wisdom. There are tricks to the professional game that need to be learned. Andre Ward and Salido demonstrated this point. Physicality, cynical fouling and pacing yourself over the distance. The last of these points isn’t of great concern for Usyk but the first two are. Usyk fired his first trainer James Ali Bashir, a disciple of Emmanuel Steward. Since then he has switched coaches frequently. His chief corner man for Saturday is most likely to be Russ Anber, a Canadian trainer, better known as a cut-man.

Usyk is transitioning from amateur to pro. Clearly he is some way along that path- no man who has unified the cruiserweight belts in 15 bouts against top opposition can be entirely amateur, after all. But the tendency to not commit fully to punches, not to punch through the target is the main hallmark of that amateur style. As Bellew put it, he does not throw every punch with an intention to hurt. Even in professional boxing, a knockout is not a prerequisite for victory, but it will mean that Bellew has less to inhibit his attacks, knowing he is unlikely to be separated from his senses by one punch. Another noteworthy aspect of Ukrainian/Russian school of amateur boxing, is an aversion to body punching. This trait was ruthlessly exposed by Ward against Kovalev. Usyk has been put down by body punching, and it won’t have escaped the attention of Bellew and Coldwell that Usyk at times appeared to complain of ‘low’ shots from Breidis in the WBSS semi final, a fight he won by a single round.

If Bellew can exploit the professional naivety of Usyk then he can get the victory. If he can bring about a crisis moment with his power, the lack of professional boxing experience in Usyk and his corner could be made to count against him. As is well known, Tony Bellew has power in spades. Arguably Murat Gassiev possessed it in even greater abundance, but, crucially, he didn’t have the knowledge to apply it successfully. If you cannot create the openings, through feints, through dainty footwork, then it is of no use to you. Bellew has an uncanny knack of knowing when his opponent’s right hand is not in a guarding position. That was particularly evident against Makabu and Flores, as well as against Haye. If Usyk drops his hands mid combination, as he very occasionally does, the counter will be there for Bellew.

Factors against Bellew, briefly, are the fact that Usyk is a southpaw- Bellew hasn’t as much professional experience against this type of fighter. The last southpaw he fought was Adonis Stevenson, a bout which he lost. The availability of southpaw sparring partners with the attributes of Usyk, must have been negligible to non-existent. Bellew will therefore have to adapt quickly to a novel style. Secondly, Bellew has had to come down to cruiserweight. Whilst I don’t think that will affect his power, and, conversely, it will have enhanced his speed, it is unlikely to have benefited his stamina, and stamina is an essential prerequisite for a fighter like Usyk, one of the few modern day fighters, who would have thrived in the days of 15 round bouts. Thirdly, Bellew has not been able to draw upon his trusty penchant for psychological warfare. Usyk’s sang-froid and lack of English render him impervious to the sort of mind games that Bellew excels at. Lastly, Bellew’s honey punch is the left hook, which isn’t a punch that comes into play as easily against southpaws as the right hand. His right hand is good and straight but not exceptional.

In summary, Usyk is rightly the favourite but Bellew has more in his favour than mere superstition. If you bet on the Bomber, there is more basis than just the ‘never write off Tony’ mantra. If Bellew wins, it won’t be sheer heart that determines the outcome, but intelligence, professional ring craft and ruthlessness.

Otherwise, the better man will win.

Read: WATCH LIVE: Briedis vs. Mikaelian / Glowacki vs. Vlasov (UK Only)
Read: Sugar Ray Robinson: The Sweetest To Ever Do It
Follow @boxingnews24