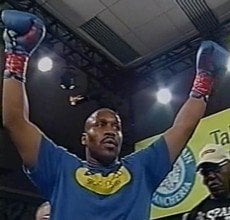 The Philly legend spent around four hours chatting with a surprisingly small number of fans (making the experience all the more intimate and special); telling us so many stories from his great career: like the time he was thrown out of Gerry Cooney’s gym for being too rough and tough a sparring partner, how he was so massively inspired by sparring and training with the great Muhammad Ali (even though, as Tim said, he knew Ali “was sick” at the time; in the early ’80s), about how he would have loved to have fought Mike Tyson in the 1990s, about how great his era of heavyweights was in comparison to today’s.

Looking far younger than his 59 years – amazingly, Tim really doesn’t look much different from the way he did 30 years ago – the champ proved a smash hit with each fan he spent time with.

Witherspoon also went into detail on the upcoming Joshua-Klitschko fight:

“I’ve been trying to be Anthony Joshua’s trainer for like three years, since before he’d really had many fights. I’ve done a few events with him, he’s a great guy. I want to help him, ‘cos I like him. I wouldn’t just teach him how to box, I’d tell him all about the things I went through; like when I got robbed in the Bruno fight; I was supposed to get $2 million and I only got $95,000, and I knocked Frank Bruno out. So I’d really like to train Joshua and help him, but with Eddie Hearn, he’s got a real tight group and they don’t wanna let anyone else in.

“But Joshua’s a great guy, I like him. But the thing is with today’s fighters is (gets up and starts showing some moves)…[say] I’m Anthony Joshua; the object is to get in and destroy. But I see a lot of boxers work their way in – they defeat their purpose, they get in and then they jump straight back! But we, Joe Frazier, George Foreman, we got inside, slipping and punching and going to work. With Joshua, you don’t see that. If they had let me train him, you would have seen him doing this [getting on the inside and staying there, slipping and hooking and working on the inside.]

“Joshua is winning [fights], but put it this way; his opponents wouldn’t last two rounds with our era guys. The competition was a lot harder, harder work back then. Klitschko, they say he [Joshua] did really well when they sparred, but that was after he’d [Klitschko] sparred with three or four guys earlier. I love Joshua, I care about him and that’s why I wanna see him do better. I’ve said to people back in America that I want to train this guy Joshua, that he’s got potential, and they say, ‘who’s that?’ You don’t wanna hear that. You wanna hear [people say] ‘Oh yeah, I know him.’ So something’s wrong. Even boxers in the gym are asking me’ ‘who’s that?’

“But he’s doing good, he’s making money. I do believe if Joshua fights Klitschko on the inside ……because in every one of his fights, Klitschko grabs when he gets in close. So Joshua, every time he gets inside with Klitschko, he’s got to fight like Joe Frazier; that’s what I’d train him to do. Even though he’s tall and long, he should work his way in and stay there; Klitschko will grab him, so it’s all in Joshua’s favour with the judges. It’s an easy win if Joshua fights on the inside – easy win. But if he stays out there [at long range], yes he could possibly knock Klitschko out, but he has a way better chance staying on the inside. Klitschko, that’s his weakness – he doesn’t know how to fight inside; you never see him throw a body shot, right? Joshua needs to be there [inside] every minute of the fight. If they fight on the outside, the fight could go either way.”