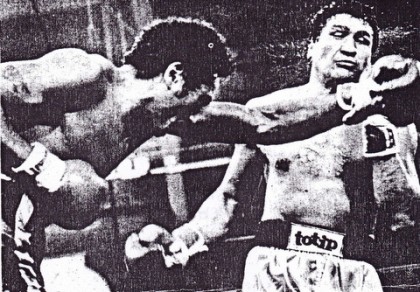 By Brian D’Ambrosio  – Marvin Camel started off the bout on 3/31/1980 for the WBC Cruiserweight title picking up where he left off in their first encounter – a brutally unfair draw on his opponent’s home territory of Yugoslavia. He flicked out a stiff right jab and scored hard body shots. Mate Parlov retreated and lost the first pair of rounds. After a sluggish, indecisive third round, Parlov stepped up the aggression in the next three, countering effectively.

In the sixth, Parlov cut Camel’s left cheek near the sideburn. Despite the chants and flag-waving of a small contingent of his countrymen, Parlov could not sustain his advantage. After an even seventh, the rest was controlled by Camel except for the fifteenth when an ugly gash below Camel’s eyebrow caused him to lose that round.

Pleasing to the Las Vegas crowd crammed with many of his home state Montana fans, Camel re-established his right jab in the eighth round and dictated the rest of the fight with his most dependable asset. As the fight progressed, Camel discovered that he could deliver this punch to its target from a crouch, and that Parlov could not counter effectively when Camel was in this stance.

Camel continued to move forward in the tenth round. After scoring with punches, he would pause to back off. The fight seemed to be reversing this cat and mouse trend again in the eleventh as Parlov split Camel’s wound again and targeted his swelling right eye.

The fight’s ebb-and-flow style reversed in round twelve; after Camel won that round by a narrow margin he lit into Parlov with his heaviest punching and scoring in the thirteenth and fourteenth. Parlov sustained a nasty gash over the right eye in the thirteenth. A smattering of left hooks to the head and a wicked left to the midsection were scored by Camel before referee Ferd Hernandez directed the Yugoslav into a corner to have Dr. Donald Romeo to examine the damage. From the fight’s continuance, Camel dominated right through the final bell.

Camel scored the best punch of the fight in the fourteenth, a right hook which landed squarely on Parlov’s face, staggering him into the ropes. With his backpedaling opponent imbalanced and dazed, Camel went in for the kill, pursuing his prey with wild arm and body punches. Parlov somehow retrenched and survived out the round.

The last minute of the final round saw Camel incur a wicked cut directly beneath his right eyebrow. Bleeding profusely, Camel’s face looked bad enough to force the referee to consult the ring physician. Romeo gave Camel a cursory inspection and raised no objections. Parlov tried in vain to stay aggressive. Lacking knockout power and the explosive arsenal of a knockout artist, Parlov couldn’t take advantage of Camel’s bad cut. Camel bided his time and nursed his wound until the final bell.

The conclusion of the fight that would crown the first cruiserweight champion of the world ended without controversy – this time. Mexican judge Jose Guerra scored the bout 148-141; Judge Angelo Toletti of Italy had it 149-141; and Judge Harold Buck of Las Vegas marked his card 144-141 – all in Camel’s favor.
Ronan, Montana’s Marvin Camel was now the first Cruiserweight  – and Native American – boxing champion of the world.

Brian D’Ambrosio is the author of Reservation Champ: A Life of Montana Boxer Marvin Camel, due out April 2013.