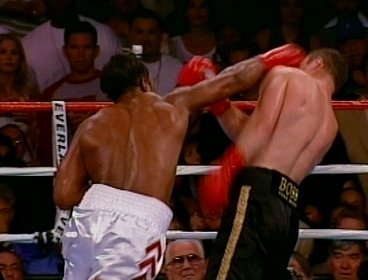 The date and venue are familiar to fight fans, heavyweight fight fans especially. Why? Because we saw a great action fight between two huge heavies, both well above the mid-240-pound range, we saw blood and gore, we saw huge bombs landed, we saw heart and courage on the line, and we were left wanting to see a rematch.

But the biggest reason fans still talk about this fight, won by Lewis via corner retirement on the part of Klitschko at the end of the sixth round, is because we all wonder what might have happened; what would have happened.

Heavyweight king Lewis, then aged 37 and coming off an apparent career-ending, legacy-solidifying KO win over Mike Tyson, decided to roll the dice one more time. Originally set to face Canada’s Kirk Johnson, Lewis ended up having around a week to get ready for late replacement Vitali Klitschko (Johnson pulling out injured).

Challenger Klitschko, then aged 32 and best known to most for “quitting” against Chris Byrd three years earlier, was eager to show the world he was a real fighter. Coming off five straight wins since the shoulder injury defeat to Byrd, Klitschko was about to give the boxing world a thrill.

Lewis, coming in at the heaviest weight of his stellar career, came out fast, yet he appeared to have no real game-plan. Later, Lennox said he wanted to drag Klitschko, for whom he seemed to have no genuine respect, into a bear-fight. The challenger was more than happy to comply. Bombs were exchanged from the offset and one of the wildest, most unskilled and ferociously entertaining heavyweight slugfests this side of George Foreman-Ron Lyle broke out.

Lewis tested Klitschko’s chin, Klitschko tested the champ’s chin. The two wrestled, tested each other’s sheer strength and willingly fought a street fight. Klitschko, hungrier and in better condition, eventually crept ahead on all three cards. Lewis, open-mouthed and struggling, soon had to dig deeper than ever before. After shipping some stunning shots in a fantastic second round, Lewis tore open a cut over Klitschko’s left eye in the third. It wasn’t long before the wound became an horrific one, arguably the worst in heavyweight championship history.

Klitschko, unfazed by the gruesome damage, fought hard, maybe even harder than he had earlier in the fight. Lewis, appearing to have emptied his tank, cracked Vitali with a perfect right uppercut in the sixth round, yet the challenger took the hydrogen bomb and did not flinch. Now who would win? Who would prevail in the sugfest that had now shifted into a battle of attrition?

We know today that we never got an answer.

Klitschko, despite fierce protestations, was pulled out after the sixth round had ended. The crowd went wild – and firmly piled into Klitschko’s corner, cheering his efforts – and both fighters exchanged words. Klitschko asked Lennox for a rematch, the champ appeared to agree to one. “You promise?” Klitschko asked, before jabbing Lewis’ shoulder with a couple of shots. By his own admission, Vitali obsessed over a rematch for years; wondering constantly what we all wondered: could he have beaten Lewis, the “strongest” fighter he had ever encountered?

But as we know, there was no part-two, no sequel, no satisfying conclusion to this great fight with an inconclusive ending. Who would have won had the two greats met when Klitschko’s savage facial injuries had had time enough to heal? We will never know.

In many ways, this never to happen rematch tops the long list of ‘what ifs?’ in boxing.