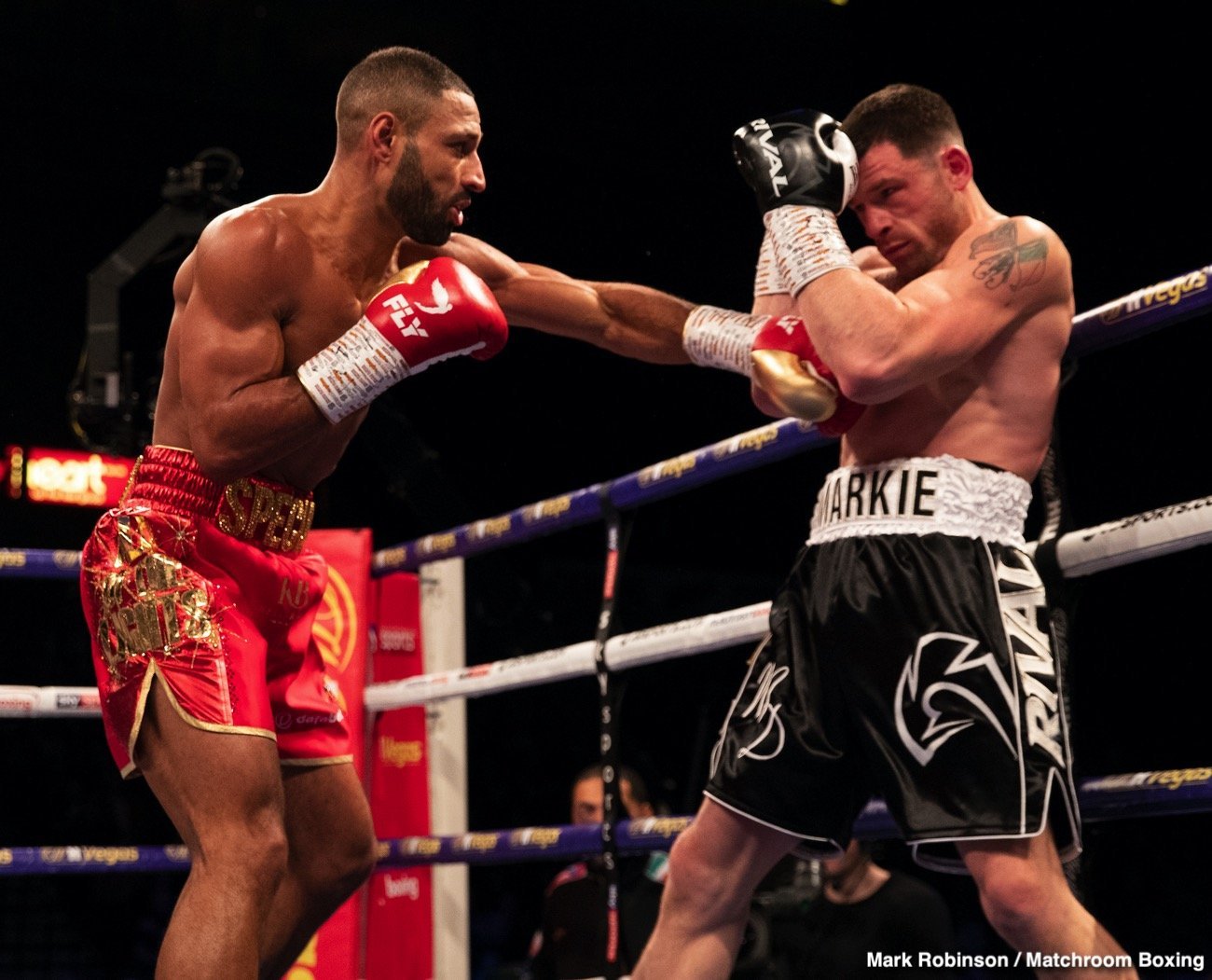 Brook looked both good and bad at times in the fight. On the negative side, Brook was getting caught with some big shots from DeLuca, and he didn’t look in the same class talent-wise as the junior middleweight champions Jermell Charlo or Jesison Rosario. Those champions are bigger, stronger and overall better fighters than what we saw from Brook tonight.

The problem with Brook putting energy into becoming the mandatory for Teixeira is the fact that he would have to wait until 2021 to get a title shot against him. Teixeira is already getting his WBO mandatory defense out of the way for 2020 against Brian Castano.

So his next one won’t be due until 2021. With Brook wanting a world title shot in 2020, it’s not going to work for him to wait an entire year before fighting Teixeira for his WBO paper title in 2021.

Brook willing to fight Liam Smith if he has to

“I’m after the belts,” said Brook at the post-fight news conference on Saturday. “I’ve got the fire in my belly, and I want to become a two-time world champion this year. Eddie is here now, and he needs to be asked the questions and get me these world titles for me.

“I got a clinical finish,” said Brook on his win over DeLuca. “The guy had never been stopped. He’s tough, durable, and his team believed he would win. He was tough at times. I was a year and a half out. I needed a couple of rounds to get into it.

“I’m just going to get better and better,” said Brook. “It’s not about working on losing the weight. I’m straight back into the gym. I knew he was going to be tough, because this is his world title fight,” said Brook about DeLuca. “I knew he’d be tough and durable. He’s an ex-Marine.

“I know how fit they are,” said Brook. “He was trying to set traps for me in there, but I’m the better fighter. I felt good in there. It’s a good fight,” said Brook on Liam Smith. “I’m sure Eddie will sit down and see what numbers he’ll come up with, and how favorable we can make it.

It might be better for Brook to tell Liam Smith and Hearn that he’s going in another direction. The reason being Liam is a tough fighter for Brook to be facing without a world title up for grabs, and it would be better for Hearn to line Kell up with a straight world title shot. Obviously, Hearn would be helping out his fighter Liam by having Brook fight him, but the fight does nothing for Kell. It’s just a needless time waster.

“There’s no point in talking about it unless we get a phone call from him saying, ‘You know what? F— it,'” said Hearn about how he hopes Amir Khan will finally agree to fight Brook. “He’s training. I just saw him on Instagram training. For me I’d jump at that fight this summer.

“It’s still a stadium. It’s a huge fight,” said Hearn on Brook vs. Khan. “Just the part of the build up would be special. We can’t waste our strategy and energy talking about it, and hoping about it. It’s literally now. We’re not interested in Amir Khan. We wouldn’t even take that fight if it was proposed to us. Teixeira-Castano is in a few weeks.

“So that’s his [Teixeira] mandatory, and the next one isn’t due for another nine months after that,” said Hearn. “The only way I want to make the Kell Brook-Liam Smith fight is if either guy can’t get a world title shot.

“Both are in the same division. So if one of them can’t get a world title shot or if that fight can get made a final eliminator for the WBO world title. Because it’s too good of a fight to do it just for the sake of doing it.

They both want to become two-time world champions, but if it gives them a path to do that, then we should try and make that fight,” Hearn said about a Brook vs. Smith fight. “It’s not a 12 round fight for nothing. It’s a final eliminator in the worst way, but maybe even for a vacant world title. But the aim for me is to try and get Kell Brook a world title shot.

It’s completely pointless for Hearn to be talking about wanting Brook to invest energy hoping and praying that Amir Khan will fight him, because it’s not happening.

Brook’s trainer Ingle wants him back in the gym Monday

“I was surprised he boxed that well. I didn’t think he would box that well,” said Brook’s trainer Dominic Ingle. “I’ve seen DeLuca, and he’s tough. I thought he’s a good fighter. If Kell has got nothing left, he’ll catch him out. He’s tough, he keeps coming, and he can sling bombs.

“Generally when you get old, your legs go and your chin goes,” said Ingle. “You start getting chipped with shots, and you’re all over the place. And Kell caught one or two. The kid, even when he was bad and bleeding and falling to bits, he never stopped fighting. That’s the type of test that Kell needed. He needed someone that would come in and run at him, not respecting anything he’s got.

Kell just had to compose himself and pick his shots. He was kind of rusty, but after 14 months, how he was able to get back in. He was sharp, and his timing was perfect and his power was there. I keep saying that he needs to get back into the gym Monday morning, because if he doesn’t get back into the gym, he can’t have three or four weeks stop, because he’ll just lose it all,” said Ingle on Brook.

“This fight and this camp was just to get him back on level. If he wants to go higher, he’s got to train harder and more. Kid Galahad got beat by Warrington on Saturday night. On Sunday morning, he was running, and he never stopped training from that day on. That’s what you’ve got to do.

“Kell Brook has got to be back in the gym Monday morning training, and he’s got to carry on training treating it like a job. It’s too dangerous of a game. He’s 33-years-old. He’ll be 34 in May, and he’s got a family. This game is a dangerous game at 34-years-old.

“There’s people getting killed in the ring a lot younger than him. So he’s got to be switched on, and if he doesn’t, then he’s just kidding himself,” said Ingle.

It should be interesting to see if Brook shows up for training on Monday morning. He doesn’t seem to like to train, and it’s hard to see Brook changing his patterns at this point in his career.