Janibek Alimkhanuly weighed 159.6 lbs, and challenger Denzel Bentley came in at 159 lbs for their fight this Saturday, November 12th The card will be streamed on ESPN+ at 11:00 p.m. ET/8:00 p.m. PT at the Pearl Concert Theater at Palms Casino Resort in Las Vegas, Nevada.

The 2016 Olympian Janibek looked like a killer recently, beating Danny Dignum, Hassan N’Dam N’Jikam, and Rob Brant by knockout. Those aren’t great fighters, making it tough to know how good Janibek is. 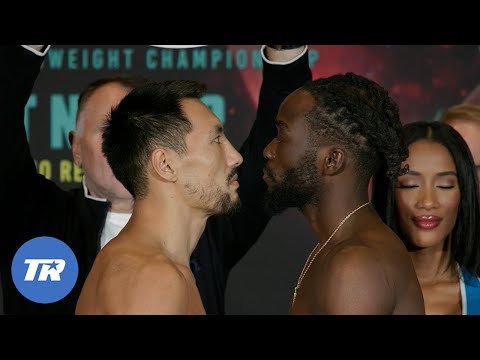 I threw in a few super middleweights because for Janibek to gain notoriety and become a star, he’s going to need to be able to move up to 168 to challenge himself against bigger & more popular fighters like Benavidez, Plant, Canelo, and Morrell.

Top Rank has picked an easy mark by selecting the British fighter Bentley (17-1-1, 14 KOs) from near the bottom of the WBO’s rankings at the #9 spot rather than one of the top contenders for the first title defense for the WBO 160-lb champion Janibek (12-0, 9 KOs).

It’s believed that Bentley was the best that Top Rank could get because no contenders were willing to face Janibek and wind up getting knocked out.

Bentley was knocked out in three rounds by Felix Cash last year in London. Cash would have been a good option for Janibek, but I suspect he would have rejected the fight also due to what he’d be up against.

Bentley has won his last three fights since his loss to Cash, but his opposition has been domestic level, which isn’t surprising given that he’s the British middleweight champion. As I was saying, Bentley is ranked near the bottom of the WBO’s top 15.