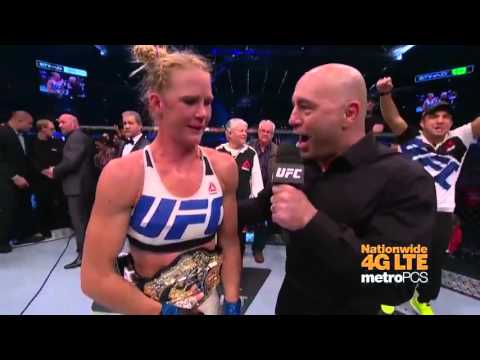 A short while back, news broke – to the disdain of many boxing fans – how MMA phenomenon Ronda Rousey would grace the front cover of “The Bible of Boxing” itself, Ring Magazine. Can Rousey take over female boxing, the feature asked. Well, it seems we got a resounding answer last night in Melbourne, Australia, as Holly Holm, a former lightweight champion in female boxing, absolutely destroyed Rousey with a 2nd-round head-kick KO.

Rousey, losing her unbeaten record, was taken to the hospital as a precaution. Holm, who was 33-2-2(9) as a boxer, last boxing in 2013 before switching to MMA where she is now 10-0, can now be expected to earn a ton of praise as well as some deserved big money. A whopping underdog going in (MMA fans are calling last night’s result the biggest upset in the sport’s history), Holm showed better technique and better speed and power.

Some boxing fans are calling the Holm victory a victory for boxing, claiming this proves boxers are tougher then MMA fighters. It doesn’t. They are two entirely different sports. Still, one question former cruiserweight king Steve Cunningham has asked on social media – will Ring Magazine now put the far more deserving Holm on the front cover – is a most apt one.

It remains to be seen if Rousey can come again, regaining her former intimidating reputation (it looks unlikely) and the reports of Oscar De La Hoya meeting with Rousey to discuss a possible boxing career may well now prove to come to nothing.

One woman who saw last night’s result coming beforehand is former female boxing star Mia St. John, who fought Holm just under a decade ago. St. John said pre-fight how Holm “wins all the way.” It is to be hoped the former Playmate had a wager on the upset!