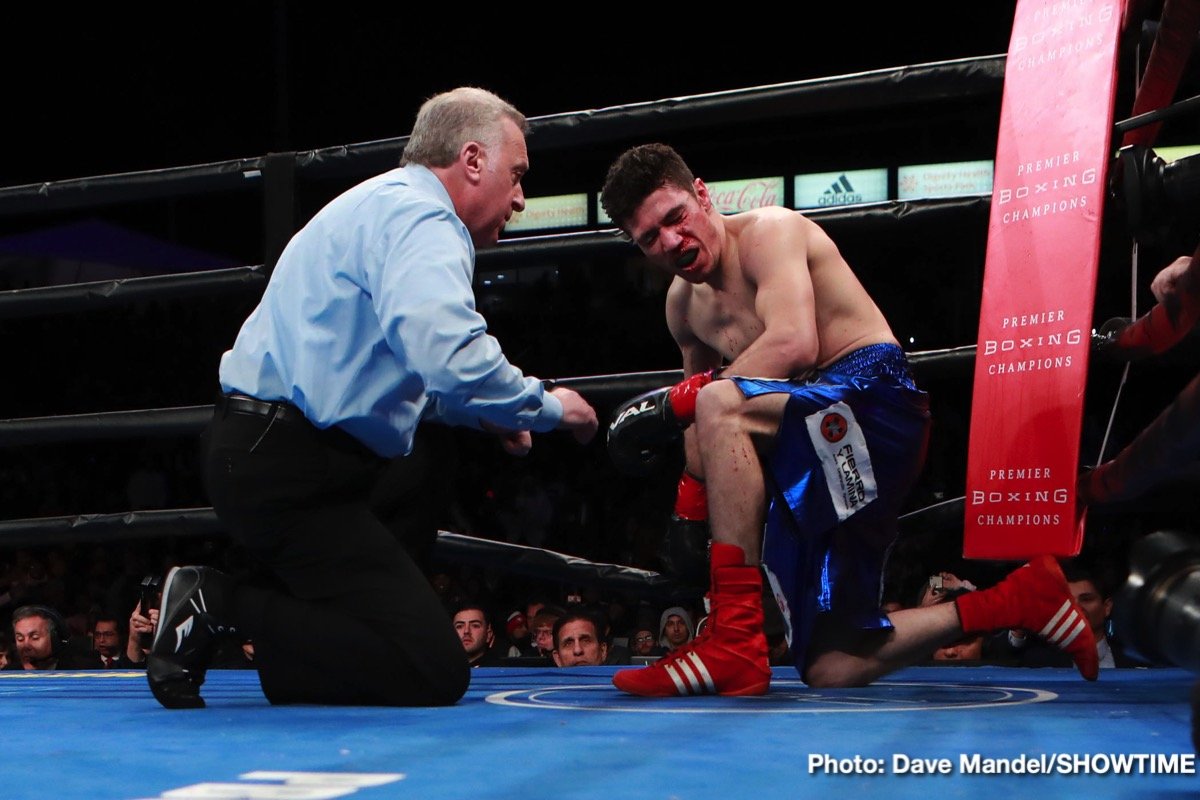 Gervonta Davis took care of his replacement opponent Hugo Ruiz the way fighters generally deal with late substitutes by stopping him in the 1st round on Saturday night in a knockout that sent shock-waves throughout the boxing world, especially to Top Rank and their would be star Vasyl Lomachenko.

World Boxing Super World super featherweight champion Davis (21-0, 20 KOs) showed zero respect for the punching power of Ruiz (39-4, 33 KOs) in stalking him around the ring and hitting him as hard as he could with every shot in this short fight at the Dignity Health Sports Park, Carson, California.

Ruiz was cornered by Davis, and nailed with a powerful left-right combination that sent the 5’9 1/2″ fighter down from a delayed reaction. The sound of those two shots landing was like a loud thud. You could tell from the sound of the impact of the punches that Ruiz was going to have a hard time handling those shots. The power on them wasn’t like a super featherweight. It was more like a welterweight.

Those 2 shots busted up Ruiz’s nose, and it was a bloody mess. When Ruiz did get back up, he was too hurt to continue fighting. The referee Jack Reiss was forced to stop it. He had no choice. Ruiz was disoriented from the last two shots that Gervonta had nailed him with. It was a big mistake on Ruiz’s part to to the corner and fight with his back against the ropes, but perhaps he felt he could defend against Davis’ powerful jabs better from that part of the ring. When Ruiz was moving around the ring, Davis was hitting him with hard jabs to the body, and he clearly didn’t like that.

Davis was supposed to be defending his WBA super featherweight title against Abner Mares but he pulled put due to a detached retina. It wouldn’t have mattered had Mares fought tonight. He would have been in just as much trouble as Ruiz. You’ve got to feel sorry for Ruiz. He had next to no time to prepare for the fight wit Gervonta. He did the best he could under the situation, but it wasn’t going to be good enough.

With the win, the boxing fans want to see Davis fight Lomachenlo, but that’s not going to happen. Lomachenko has got other plans, and a fight between those two is likely far off, if it ever happens.