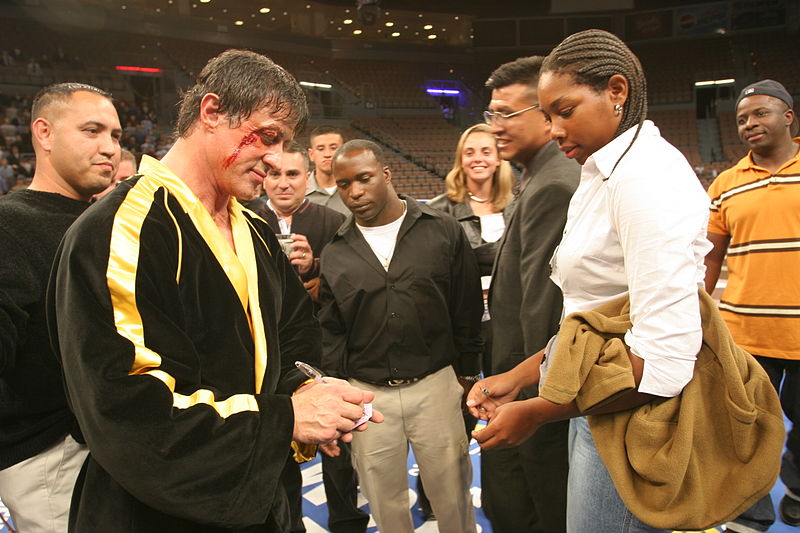 Yesterday, November 21st, saw the 40th anniversary of the movie premiere of arguably the finest, the best-loved and the most inspirational boxing flick of them all – “Rocky.” All these years (and six sequels) later, “Rocky” is a movie and a fighter to have passed the test of time in style; still standing and way ahead on points.

Fans simply love the Sly Stallone creation, even if some of the more hard nosed film critics enjoy slating the over the top theatrics of the series (having been guilty of totally missing the point). Bottom line: “Rocky” is a great film; as are some of its sequels.

But is the 1976 Oscar winner THE greatest boxing film ever made? How about “Raging Bull?” “The Fighter?” “The Greatest?” “The Harder They Fall?” “Million Dollar Baby?” “The Set-Up?” “Cinderella Man?”

Here is a celebration of some of the finest pieces of cinema devoted to The Noble Art.

The great Humphrey Bogart’s final film. Loosely based on the real-life exploits, and the exploitation, of Primo Carnera, this movie is both touching and powerful. Bogart is terrific in it, as is Rod Steiger as the unscrupulous and shady figure who cruelly uses giant heavyweight attraction Toro Moreno for his own ends.

A celebration of the almost unimaginably tough times James J. Braddock somehow made it through. Russell Crowe is excellent as the former light-heavyweight star who stunned the world by coming back from the bleakest existence possible to win the heavyweight title.

Over the top? Offensive? Corny? Yes to all three, but the fourth instalment in the series is also unmissable fun. Try flicking it on, late at night, ten or so minutes in – and not watching it to the end!

Another tale devoted to the big underdog. Robert Ryan is excellent as the hero who falls foul of brutally cruel odds. Does he overcome them? Watch this masterpiece and find out.

More tearjerker than boxing movie this one may be, but the performance Clint Eastwood gives as the grizzled, seen-it-all-done-it-all trainer is special. Hilary Swank also put in a ton of hard work as the female lead. And when has supporting actor Morgan Freeman ever let us down?

Another film that pays tribute to a real life fighter, this piece of magic celebrates the tough climb Rocky Graziano had to make to become world middleweight king. Paul Newman stars, in a role that was set to go to James Dean before his untimely passing.

Mr. T as Clubber Lang! Awesome. Entertaining, constantly watchable and supremely edited; the third instalment gave us The montage! The only film in the series where Rocky gets KO’d. The film is T’s though – “Hey, woman!”

A true modern day classic. The tale of Micky Ward and his half-brother/trainer Dick Eklund is captivating. Truly impressive, especially when we consider how the film doesn’t even touch on Ward’s three-fight rivalry with Arturo Gatti.

Often referred to as THE boxing film, the story of Jake La Motta is both engrossing and hard to watch. Certain scenes in Scorsese’s epic can literally leave you with a pounding headache.

How right was Stallone to roll the dice with this sequel? The Balboa story had legs and Sly and the fans knew it. Almost as good as the original, and that’s saying something.

Worth watching, but in a big way, simply for the incomparable Muhammad Ali’s portrayal of himself (who else could possibly do the great man justice!) And any film that features the majestic James Earl Jones has to be worth a look.

The original and the best. There is just so much to love in this film: Stallone’s turn as the downtrodden pug, the great Burgess Meredith’s beautiful portrayal of the aged manager/former fighter who sees Rocky as his one last shot at making something of his own life, Carl Weather’s thinly-veiled Ali impersonation – and the list goes on.

Who doesn’t love Rocky, and who doesn’t root for him – still, all these years later!