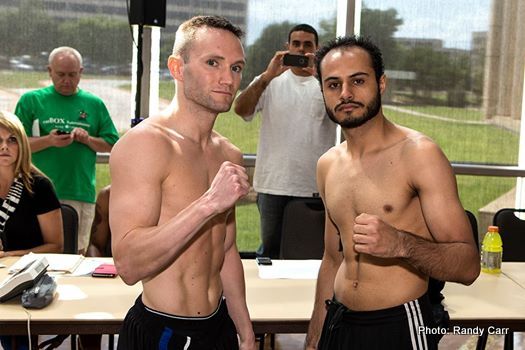 Fighting in humidity that might have made the NBA Finals jealous, WBU Lightweight Champion Noah Zuhdi successfully defended his crown Friday night after challenger Eduardo Pereira dos Reis yielded to battered ribs and quit on his stool after the fourth round. The TKO victory at OKC Downtown Airpark in Oklahoma City marks Zuhdi’s second defense of the title, but perhaps more importantly, another aced test as he graduates to the upper echelon of the 135-pound class.

The roughhouse battle was not an ideal one for Zuhdi (18-1, 14 KOs) as the crafty Reis (13-2, 8 KOs) was warned but never penalized for headbutts throughout the affair. Every clinch seemed to end in controversial fashion as Reis attempted to get inside Zuhdi’s head by using his own. Undeterred, the champion and his trainer, Dickie Wood, adjusted to the uneven pace set by the challenger.

“The head was his third hand in the ring,” Wood joked after the fight. “But this is what we wanted. We wanted someone skilled and tough, someone who would force Noah to figure things out in the ring and improve. I only wish it would’ve gone longer.”

Reis did not have that same desire after the fourth, but he made some gutsy decisions in the beginning of the bout. The Brazilian strayed from scripts he authored in past tenacious wars and played the role of counterpuncher in the first two rounds. The strategy worked in catching Zuhdi off guard, but Reis could not catch him enough with his counter right-hands. Subsequent clinches would beget the aforementioned rough tactics.

“From his use of an aggressive stance only to come in to look for a counter, to the pushing with his head to break clinches, it was pretty bizarre,” Zuhdi admitted. “I started out slow at first, but I was studying him. I felt I was significantly stronger and could break him down as the fight progressed.”

Boxer and trainer alike agreed it was time to shift gears. The third stanza saw a change of pace and a picturesque counter right from Zuhdi that drew roars from the Oklahoma crowd, a punch he said they “had been working on during the whole training camp.” The crowd also witnessed him beginning to win the infighting with some thudding blows to the body. By the fourth round, Zuhdi dictated the action and was in championship form while landing stiff jabs, double jabs, and combinations without answers from Reis.

There would be no fifth.

Reis and his corner informed the ref that he could not continue before the beginning of the next round, citing a rib injury. The abrupt ending may not have been the most satisfying one for the fans, but Zuhdi was grateful to see his hard work pay off and his challenger began to break down in the demoralizing fourth round.

“He was a tough guy,” Zuhdi said after the fight. “I was thrilled at the end, knowing that his will had been broken. I’m now 3-0 in title fights. I’m proving that I’m continually progressing against a level of competition that is increasingly higher.”

What comes next for Zuhdi remains to be seen. He still has a couple of necessary rungs to climb to get to the top of the ladder. Still, his exciting fighting style, charisma, and clean resume that includes family man and practicing attorney makes him a unique and popular commodity at the regional level. Yet, nationally televised fight offers have been untimely or fiscally disadvantageous thus far. The bottom line, however, is that he and his results are improving even as his opponents’ skill level improves.

“I can take on the better fighters,” the champion said in regards to what kind of statement Friday night’s performance made. “I’m ready for the challenge.”

-CatBOX Entertainment stablemate Bo Gibbs Jr. continued his winning ways as he earned a lopsided unanimous decision over David Lujan in a six-round bout. Gibbs’ crowd pleasing style has helped him rise to a 11-0 record. Lujan falls to 4-2.

-Zuhdi sparring mate Terry Buterbaugh (10-10-3) fought in a highly contested and entertaining battle with Anthony Hill (1-0). Hill came away with the majority decision.