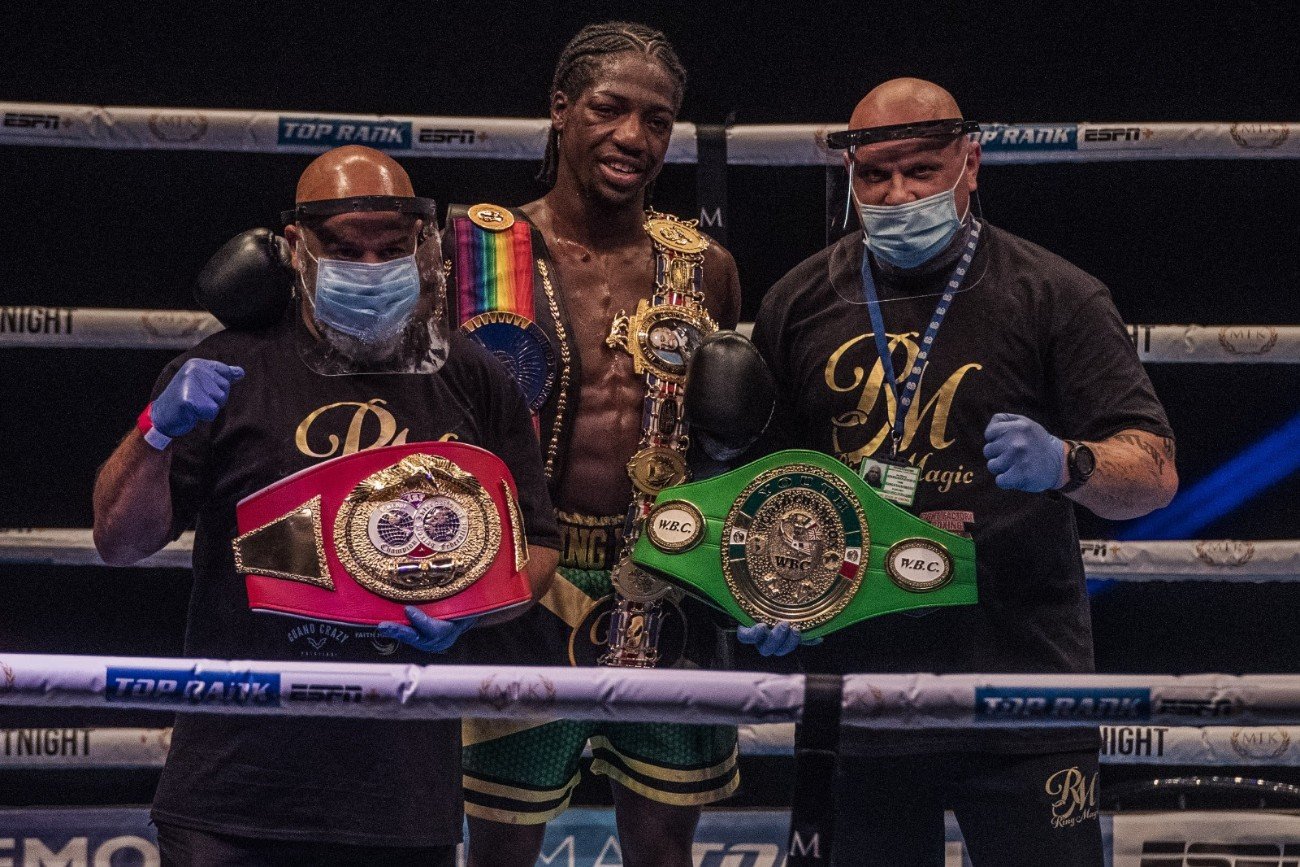 It was a yet another spectacular #MTKFightNight event – which featured five incredible knockout wins and the crowning of a new British and Commonwealth super-lightweight champion.

Bowes headed into the fight as the Commonwealth champion, and it was a nip and tuck fight between the two men in the opening stages. Brown began to take over after the midway point, though, using his jab well to nick the rounds. 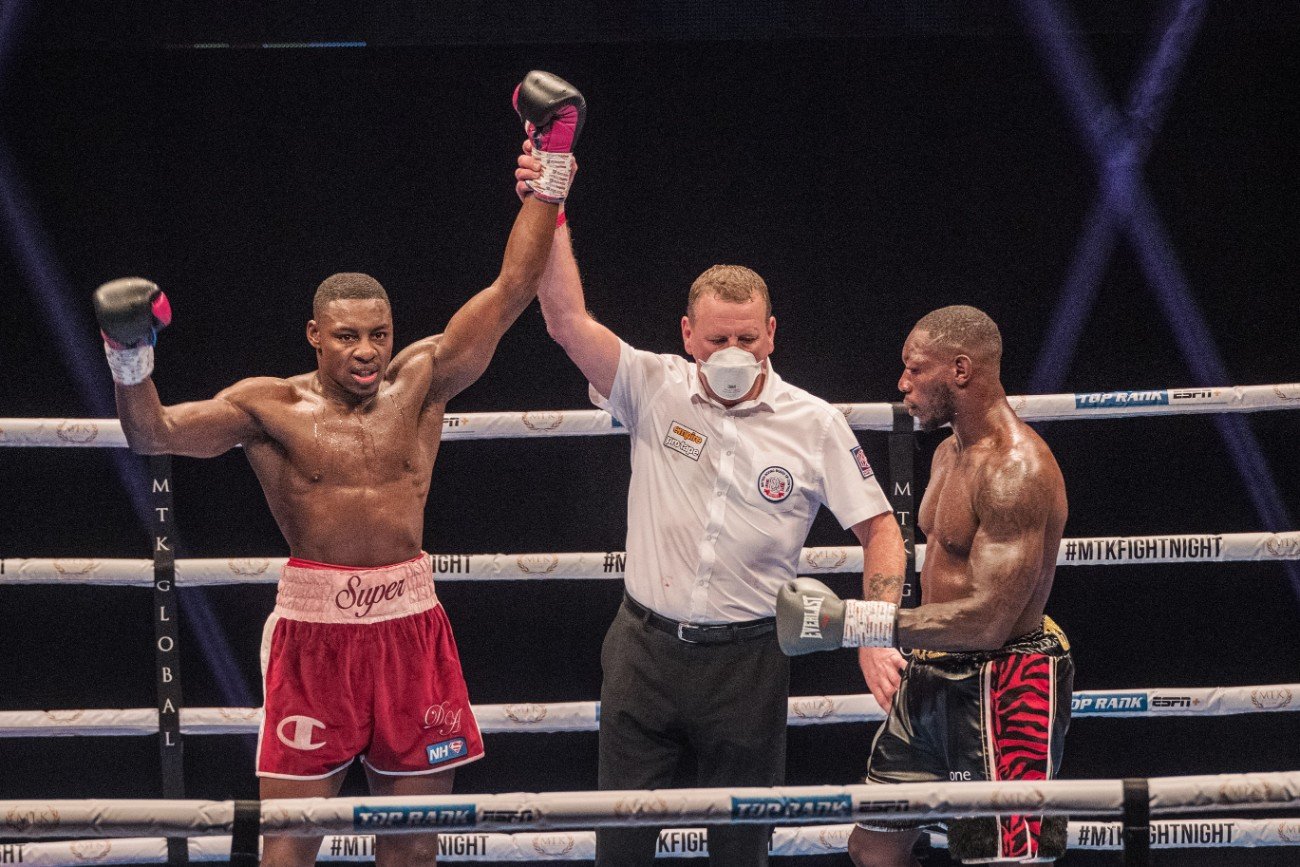 Brown said: “I’m pleased to win these belts. My whole city has been behind me, backing me. I’m happy to be the first person from Gloucester to hold these belts.

“It’s always been a rugby city, but I want to change it to a boxing city. I’m hoping I’ve opened the door and shined a light on the city because we have lots of good boxers coming through.”

There had been plenty of bad blood between the two men in the build-up, and Azeez made sure he earned bragging rights after an outstanding performance during the contest.

Azeez’s clinical display led to Sterling’s corner throwing in the towel during round nine, seeing Azeez extend his unbeaten record and keep hold of his belt in the process.

“He got me with a good shot in round five, but unfortunately for him, it pushed me on even more. One of my drives was my mum, she was suffering from COVID and was on her deathbed, but thanks to the NHS, she made a full recovery.” 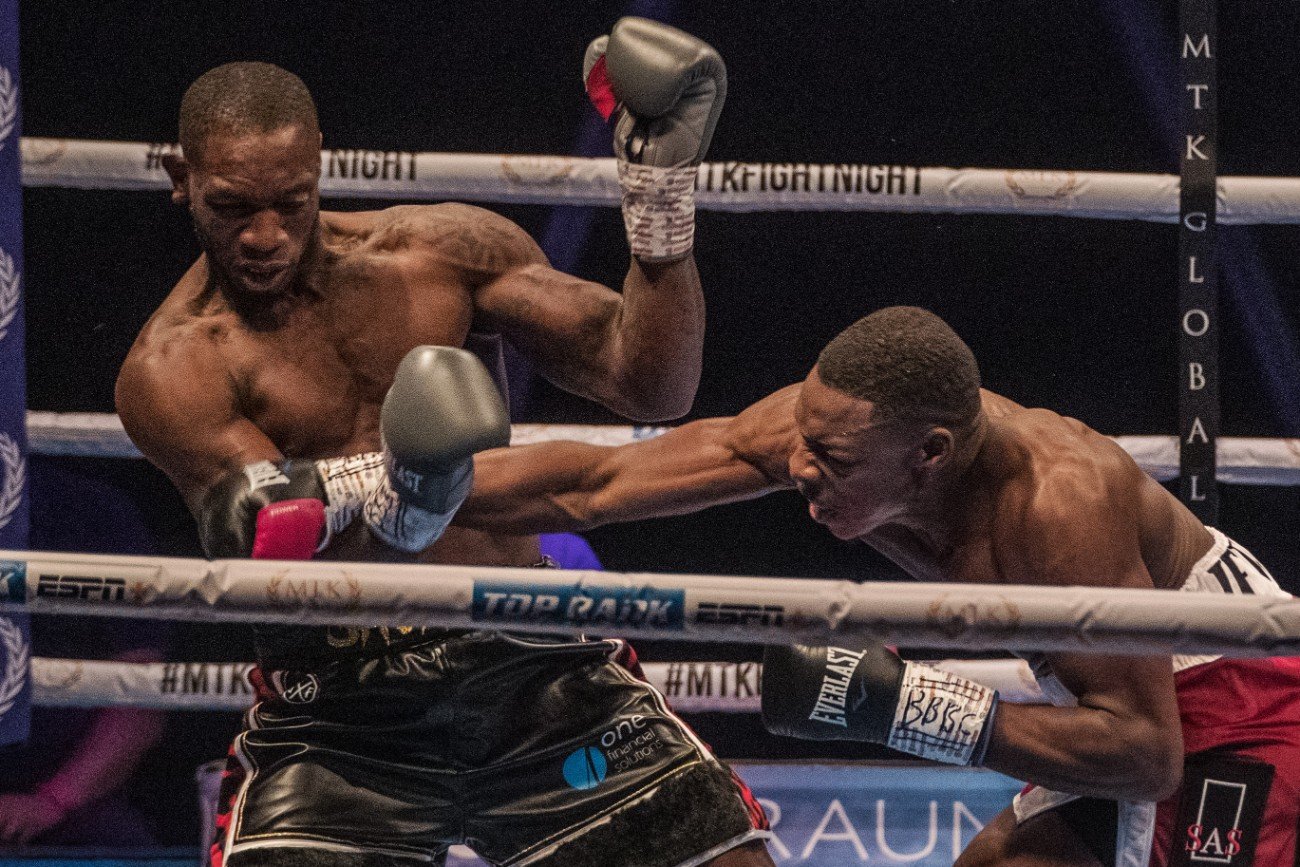 McCrory wobbled Ellison midway through the first one, and he didn’t let his opponent off the hook, continuing the barrage of punches before firing in with a massive shot that left Ellison down and between the ropes.

The power of the shot was enough to make the referee wave the fight instantly off, giving McCrory a superb first-round knockout win.

McCrory said: “I felt a lot bigger and stronger in this camp, and I think it showed tonight. I feel a bit bad for Mickey because he is a good guy, and I knew he was coming here to win, but it was good to get it done early.

“I’m in the gym with Lewis Crocker, and we have some great sparring. I have full belief in the team, and I’m looking forward to the future.”

Elliot Whale (3-0, 1 KOs) came out on top in the clash of unbeaten fighters after a brilliant first-round stoppage win against Corey McCulloch (4-1).

It didn’t take the rising star long to make his mark, firing in a rugged body shot that crippled McCulloch. The Scotsman managed to get back to his feet before the count of 10, but the pain set in, and he couldn’t continue.

It forced the referee to wave off the contest and ensure it was a big win for Whale inside the opening round of the fight.

Whale said: “I heard him groan, and I thought I’ve got him here. As an amateur, I was stopping people and knocking them out. The two journeymen I felt before this fight was trying to survive, now I had someone who was coming to win, and we saw what happened.

“I want to keep fighting better opposition, so my trainer Al Smith and my team MTK Global will guide me well and keep pushing me forward.” 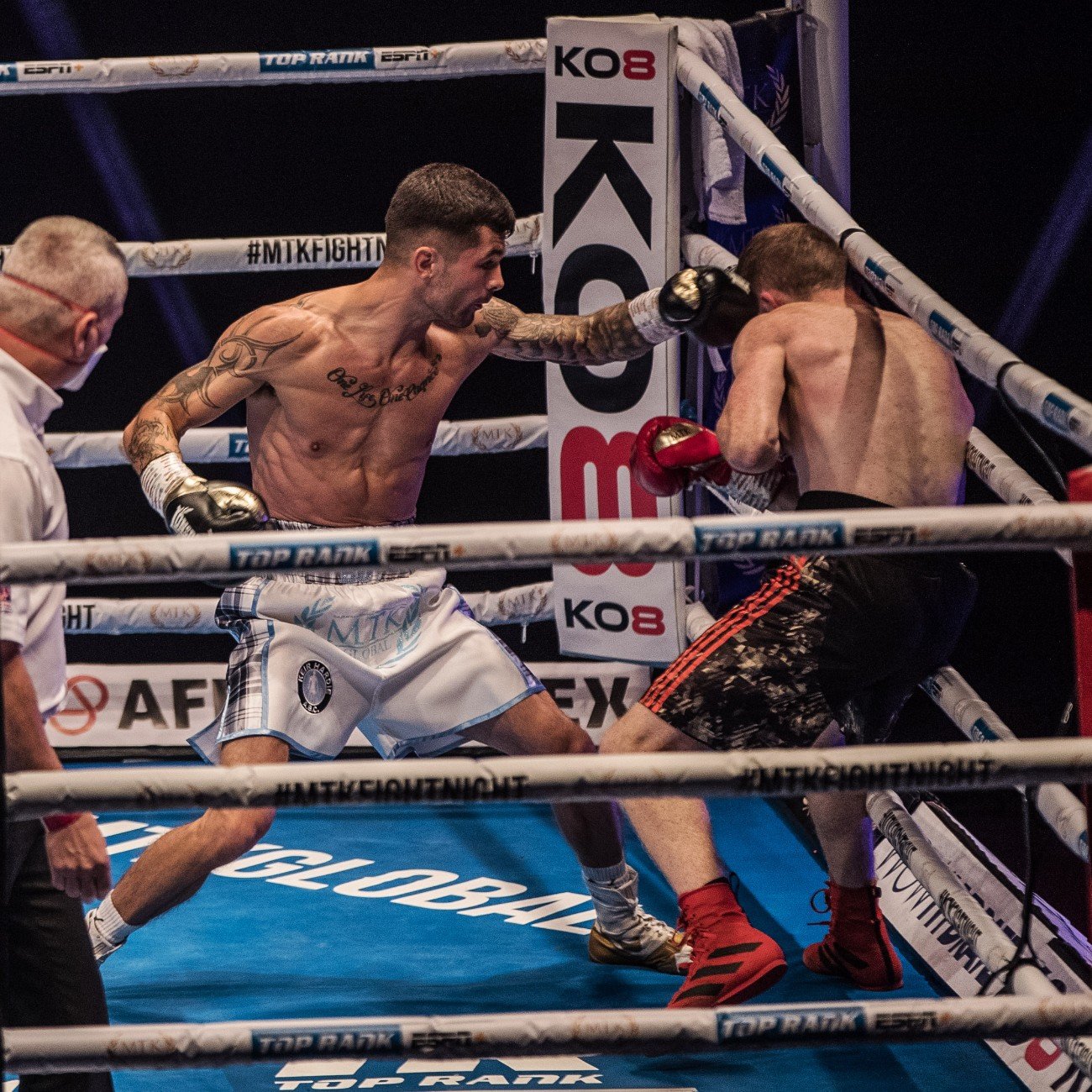 Harlem Eubank (10-0, 3 KOs) gained revenge over his old amateur rival Martin McDonagh (8-2) with an eighth and final round stoppage victory.

McDonagh had beaten Eubank twice during the amateurs, and it looked like it could become the hat-trick when McDonagh started the fight well. Eubank turned things around though, having a great fourth round, and he never looked back from there.

He continued to dictate proceedings throughout the closing stages, before landing a flurry of great shots in the final round, which McDonagh was unable to recover from, handing Eubank the superb stoppage win.

Eubank said: “I’m happy with that. I knew I was going to come back with reliable performance. I’ve been working a lot in the gym, and I’m glad it showed in the ring.

“He’s a tricky southpaw, so it takes some rounds to break that down, but I got to him in the end before the final bell. I found my way to get in and connect with the hard punches.” 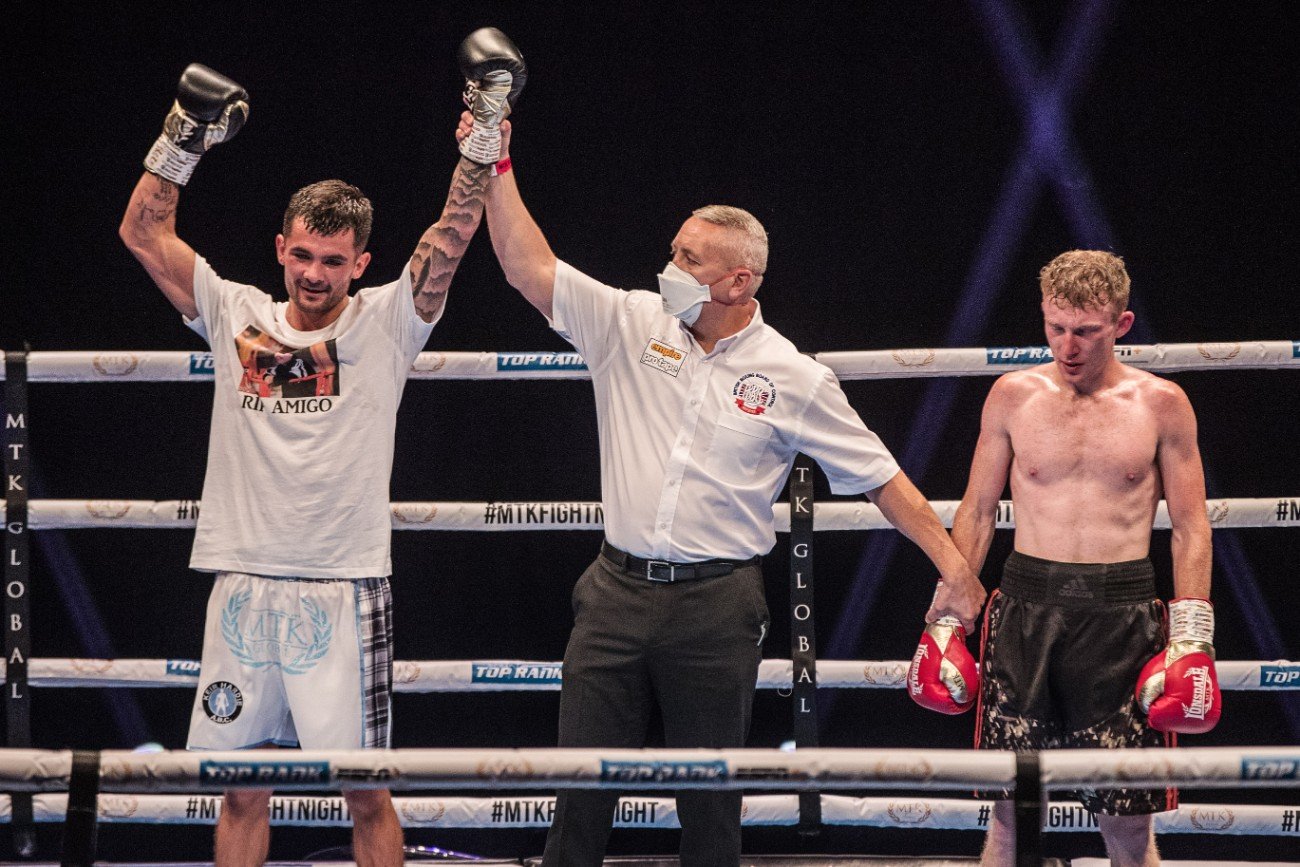 McKeown was in control throughout the fight, landing several powerful shots that troubled Dunn. The onslaught continued into the fourth round, forcing the referee to step in and wave off the contest, handing McKeown the win.

Later this month, the prestigious #GoldenContract event returns on September 30, as Ohara Davies takes on Tyrone McKenna in the super-lightweight finals, while Ryan Walsh goes up against Jazza Dickens in the featherweight finals.

The light-heavyweight semi-finals also take place, with Hosea Burton traveling to Latvia to face Ricards Bolotniks on September 26, and Liam Conoy squaring off with Serge Michel on September 30. 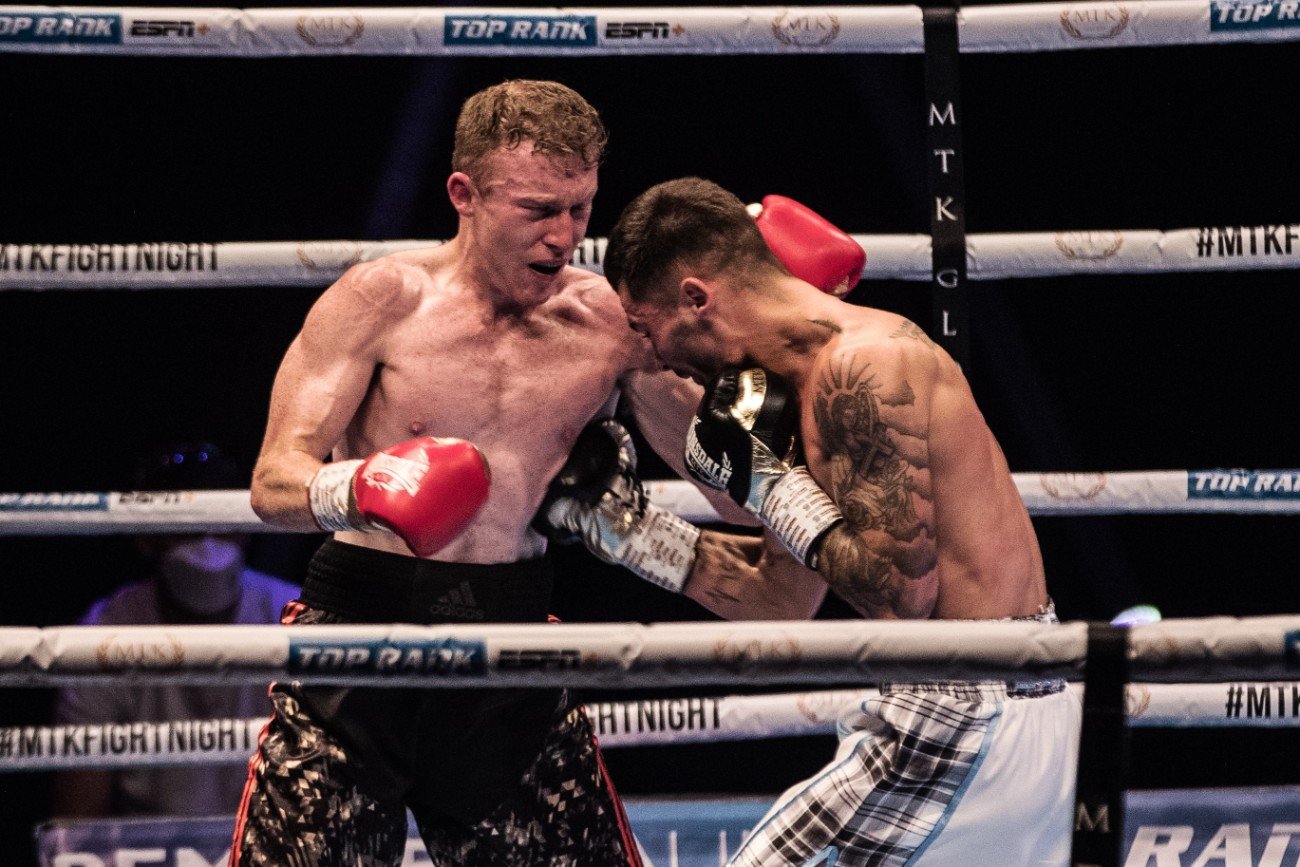