31.08.06 – Gary Reid returned to Impact Boxing’s gym in Stoke-on-Trent on Monday after taking a two-week holiday in Egypt and declared himself ready and waiting to take on Nigel Wright for his English Light-Welterweight belt. Reid, dubbed ‘The Body-Snatcher’ on account of his fearsome punching power, said: “The break has done me a power of good, I am feeling ready for anything now and I cant wait to get into the ring again. I had been suffering with a niggling shoulder injury since I fought Leo O’Reilly but the rest seems to have done it good and I feel better than ever now.” 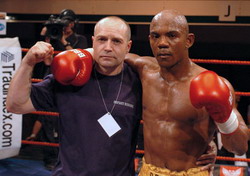 “This fight against Nigel Wright is the biggest of my career so far and I am totally focused on it. Impact Have a show at the Kings Hall on September 30th and I am so hungry that I wish I were boxing on it. Not so long ago I would have insisted that I was on the show but Lindon Newbon, Karl Stubbs and Scott Lawton have all told me that I just need to concentrate on the English Title bout and I have to agree with them.”

“Mentally I am much stronger than I have ever been and I will be better prepared for this fight than ever before. I know that there is only one person who can prevent me from winning this title and its not Nigel Wright, its Gary Reid. Now that doesn’t mean that I underestimate Wright, I don’t he is a very accomplished boxer and has beaten some good opponents. What it means is that I haven’t always prepared properly before fights in the past and that won’t happen this time. I will train harder than ever and with the team I have behind me at Impact Boxing I also know that I will get all the support that I need. There is a real team spirit in the gym and it lifts everyone.”

“Although I am totally focused on Nigel Wright I am still looking forward to the show on 30th September; it will be Scott Lawton’s first contest since he won the English Title and I expect him to be sharper than ever. Also Jimmy Doherty is looking in great shape and I am looking forward to seeing him box too; I know that both Scott and Jimmy have been sparring with a major title contender recently and I can’t wait to see how this has benefited them both. Aaron Thomas is also making his debut on the show and I saw him sparring for the first time on Tuesday, he looks a real handful and I am sure he is going to be well worth watching. I cant wait, but instead of getting in the ring this time I will be cheering all the lads on from ringside.”

Impact Boxing’s head coach Lindon Newbon also had a few words about Reid’s forthcoming title challenge: “I couldn’t believe how strong Gary was on Monday since it was his first day back in the gym after two weeks off; he was hitting as hard as ever and his shoulder seems to have healed. I am confident that by the time that the fight comes Gary will be in condition to bring a second English Title back to the Impact gym.”

Tickets for Impact Boxing’s 30th September event are available by contacting the ticket line on: 0845 156 7168