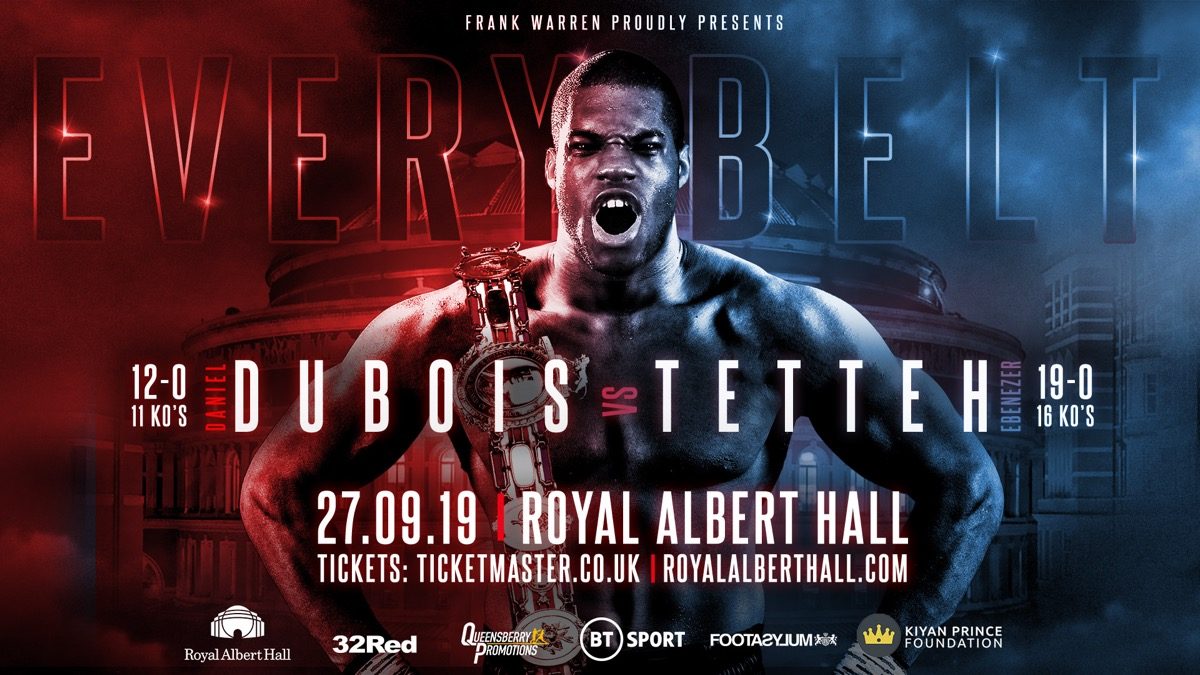 Great Britain’s unbeaten heavyweight destroyer, Daniel “Dynamite” Dubois, will take the next step in his career when he faces off against fellow unbeaten Ebenezer Tetteh in a 12-round showdown for the vacant Commonwealth title Friday at London’s Royal Albert Hall.

Dubois (12-0, 11 KOs) is a familiar face to American fight fans, as his last five bouts have streamed live on ESPN+. He has won three in a row by knockout, including a second-round stoppage over former world title challenger Razvan Cojanu in March. The following month, he survived a brutal slugfest to knock out Richard Lartey in four rounds. Dubois authored the signature win of his career July 13, knocking out fellow unbeaten Nathan Gorman in five one-sided rounds to win the British heavyweight title.

Tetteh (19-0, 16 KOs), from the fighting city of Accra, Ghana, is unbeaten but largely untested. He has won six in a row by knockout and is seeking revenge for his countryman Lartey, who provided Dubois with arguably his toughest fight.

In other action streaming on ESPN+:

EBENEZER TETTEH INSISTS he will punish Daniel Dubois for looking beyond the job in hand, while also vowing to inflict revenge on behalf of his countryman Richard Lartey.

Tetteh travels to the Royal Albert Hall from Ghana for a Commonwealth heavyweight title assignment on Friday September 27 encouraged by the problems the larger-than-life Lartey presented young star in the making Dubois at Wembley in April.

The pair engaged in a thrilling shootout that ended with the then once-beaten Lartey being stopped in the fourth. By opening fire and happily trading bombs, Dubois passed his chin-check on the night.

The unbeaten Tetteh, 19-0, is something of a potent puncher himself, with 16 KOs to his name

The 31-year-old from Accra reckons he will succeed where Lartey floundered.

“I am going to England to get revenge for my countryman Richard Lartey,” warned the latest entry to the Dubois hit list. “Richard gave Daniel hell but couldn’t get the job done – I will finish what Richard Lartey started.”

It hasn’t gone unnoticed over in Ghana that Dubois has been linked with and commented on potential future battles and Tetteh likens the situation to that of Anthony Joshua, who was continually responding to questions over fights with the marquee heavyweights ahead of his first professional reverse to the unfancied Andy Ruiz.

“Daniel is speaking a lot about fights with David Price or Dereck Chisora,” added Tetteh. “He is definitely overlooking me. It reminds me of when Anthony Joshua was going into the fight with Andy Ruiz and kept talking about fighting Wilder and Fury.

“He got punished for overlooking his opponent and I will punish Daniel Dubois.”

Conor McGregor: I Won Rounds And Hit Mayweather More Times Than Pacquiao Did When They Fought781 Total Shares