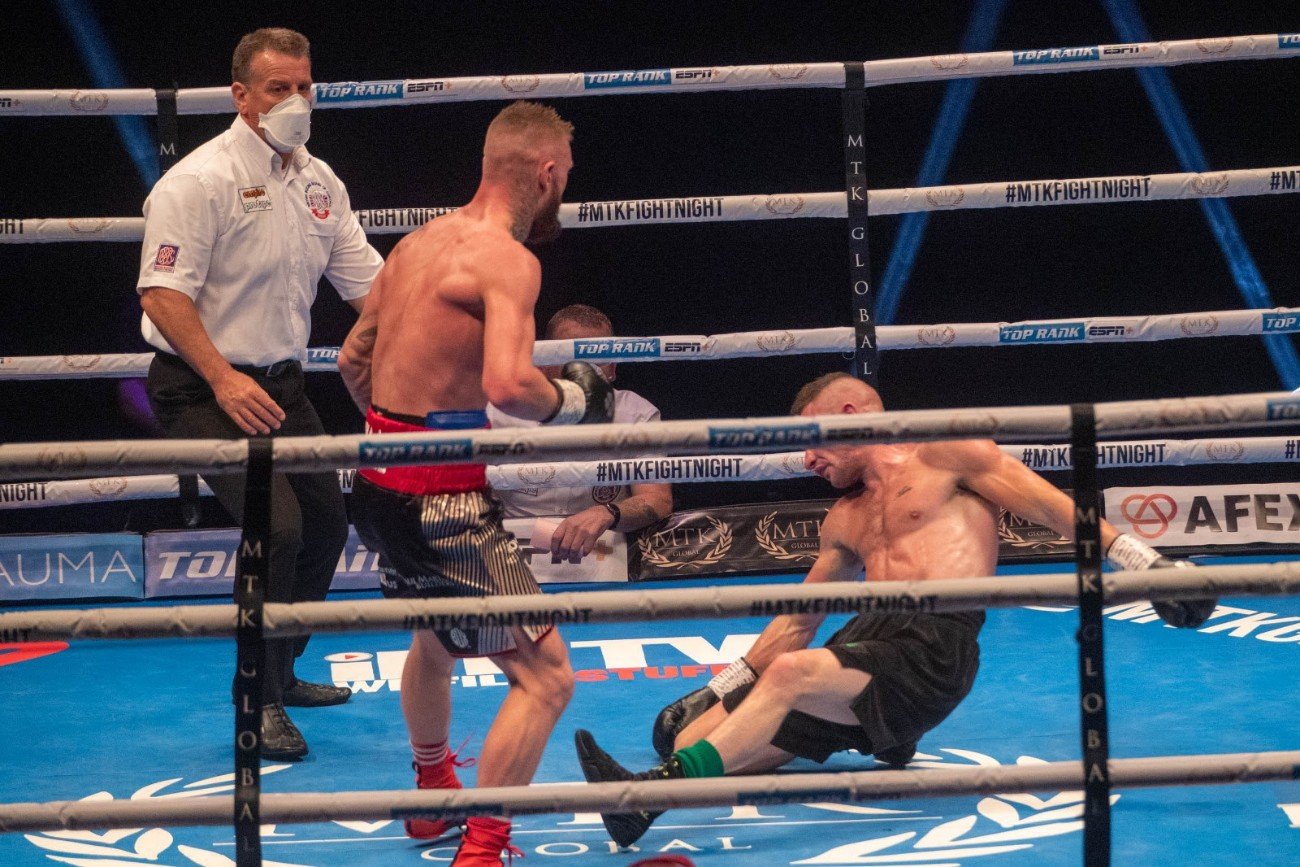 It was a tremendous evening of action as another huge #MTKFightNight event took place – and saw Lewis Crocker stop Louis Greene to become the new WBO European welterweight champion.

The massive event at Production Park Studios in Wakefield was live in the US on ESPN+ in association with Top Rank, and worldwide on IFL TV, and featured several fascinating fights.

Liam Taylor, Gary Cully, Fearghus Quinn, and James McGivern all picked up impressive wins, making it a fantastic #MTKFightNight event. Free to use images can be found HERE (Please credit MTK Global), and full results can be found below:

Lewis Crocker made a huge statement, as he produced a destructive performance to stop Louis Greene and become the new WBO European welterweight champion.

Crocker got off to a great start when he dropped Greene at the end of the first round, and he continued to perform well throughout the fight. A dominant round seven then saw Crocker drop Greene two more times, forcing the referee to step in and wave the contest off.

It means that Crocker extends his unbeaten record, and sends out an ample warning to the rest of the welterweight division.

Crocker said: “This is my first title as a professional, so this means everything to me. I felt in great shape in there, and I worked extra hard. It all paid off, and I know I’ll be an excellent welterweight for years to come.

“Fair play to Louis Greene, he was as tough as they come, and he gave me the toughest fight of my career, and I feel it was a great fight for the fans at home. I’m looking forward to seeing what MTK Global has in store for me in the future.”

Those watching the event on TV throughout the world were treated to one of the best fights since boxing resumed this summer, as Liam Taylor overcame Darren Tetley in a fantastic contest.

Both men gave their throughout the ten rounds, with Taylor gaining the momentum after dropping Tetley in round two and three. Tetley did well to recover and ensure it remained a fascinating fight throughout, but in the end, it was Taylor who got the nod.

The judges scored it 96-93, 96-93, and 95-93, handing him the victory in a fight that was also serving as an eliminator for the British and Commonwealth welterweight titles.

Taylor said: “I’m happy to get the win against an undefeated fighter. I believe I’m the best in Britain, and now we’ll move forward and get bigger fights.

“I’m glad that Tetley asked questions of me, but I proved that I have got a good chin. I knew going into camp that I wanted to change a few things up. I got re-focused, and I had the best camp going ahead of this fight.”

British and Commonwealth bantamweight champion Lee McGregor showed yet again why he is known as ‘Lightning,’ as he earned a substantial fifth-round stoppage win against Ryan Walker.

The fight was contested at super-bantamweight, and McGregor’s power showed in the weight above, landing several hurtful punches, with the biggest of them coming just four seconds into round five.

A big right hook from the Edinburgh man sent Walker to the canvas, and while he was able to get back to his feet, the referee had seen enough and waved the fight off to hand McGregor an impressive TKO win.

McGregor said: “I was fully confident I would put in a big performance. Everything went well in the gym, and I knew that was the performance people would see.

“There was no quit in him, but he was taking some big shots, and I felt it would just get worse, so I think it was the right call to end it. I want to get a defense in before the end of the year, so I’ll speak to my team and see what happens, and then 2021 is going to be exciting too.”

Fearghus Quinn made an immediate impact on his professional debut, as he dominated the action on his way to an awe-inspiring points victory over former Southern Area title challenger Robbie Chapman.

Quinn was jumping in at the deep end by facing a formidable opponent on his debut, but it didn’t faze him as he dictated proceedings from the off, landing several massive shots that rocked Chapman.

Despite the onslaught, Chapman was able to make it to the final bell, with the referee giving every round to Quinn, handing him a 60-54 verdict to make it a brilliant start to life in the paid ranks.

Quinn said: “I’ve been training hard over lockdown and this chance came up on short notice, so I was glad to get off the mark, even if it was in unusual circumstances.

“MTK Global got me out, so I was very thankful. Robbie was a tough guy, I thought I hurt him in the first round, but he recovered well. Now I want to move on to bigger things. I fought someone with a winning record on my debut, and it shows I mean business.”

An incredible bout went down between Gary Cully and Craig Woodruff, as Cully got up off the canvas to earn a hard-fought points win against his Welsh rival.

It was a competitive battle between the two men, but the fight came to life in round five when Woodruff dropped Cully. The Irish champion was able to get back to his feet, before then finishing the round strongly, landing some huge shots.

Cully was able to get the better of the action throughout the eight rounds, with the referee scoring it 77-75 in his favor after a fantastic contest.

Cully said: “Fair play to Craig. He woke me up in the fifth round. I thought I won the first four rounds and probably switched off a bit. It’s all experience for later on in the career.

“I hadn’t lost a round in my professional career so far in the first ten fights, so it’s good to get in there with someone and be tested. I’d never been knocked down even in sparring, but thankfully I caught my bearings. I’m looking forward to watching it back!”

It was a fantastic start to life in the paid ranks for James McGivern, as he earned a convincing points win over the experienced Jamie Quinn.

Amateur sensation McGivern was making his highly-anticipated professional debut, and he lived up to expectations as he dominated every round, landing some big body shots on his way to a 60-54 points verdict after six rounds.

McGivern said: “It felt brilliant to be back in the ring finally. The difference between being an amateur and training and training as a professional is enormous; this has been a lot harder.

“We knew the opponent was tough, and people will look at the record and thing he must be terrible, but he’s as tough as he comes. He took every shot I threw. I loved every bit of it in there, and I can’t wait until I can get back to Belfast to fight because I’d pack the Ulster Hall out.”