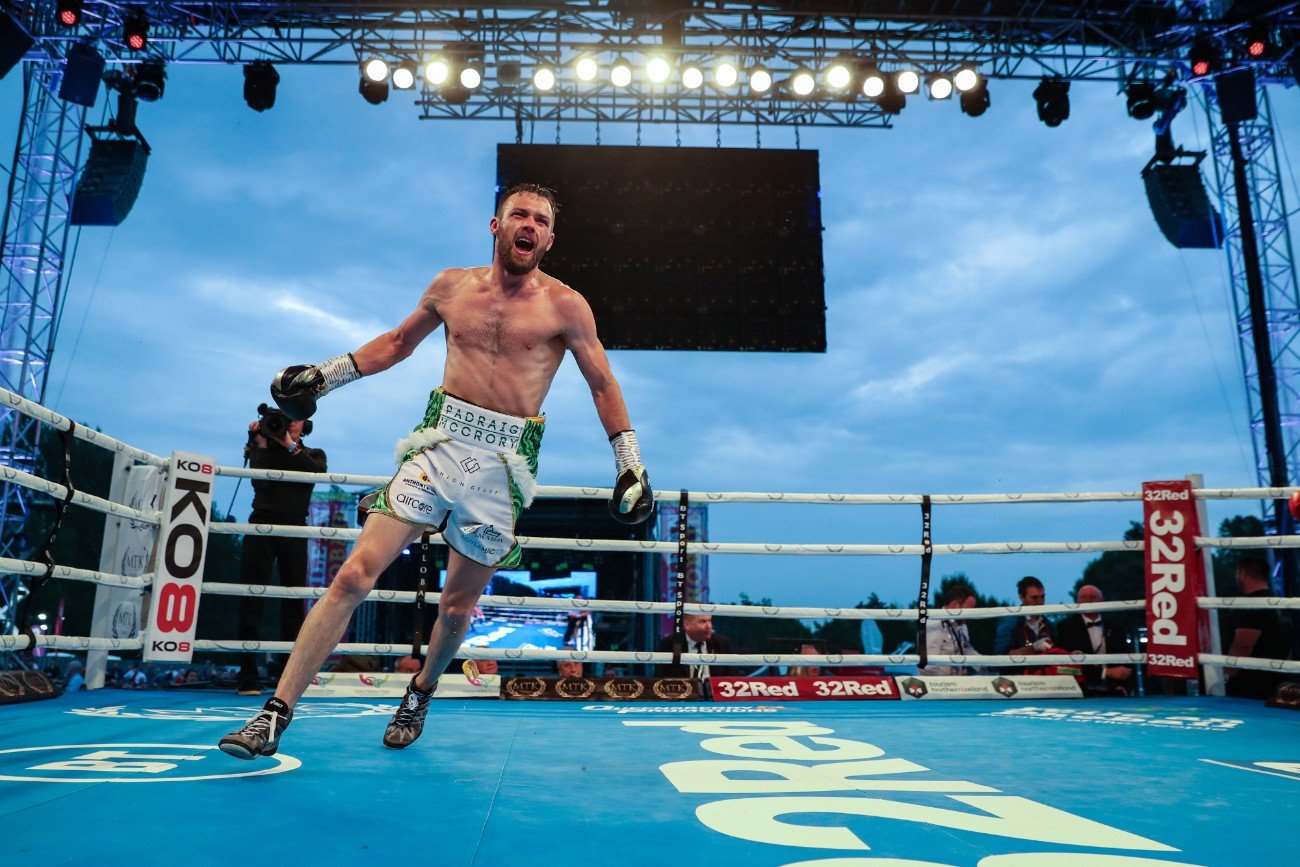 Undefeated Padraig McCrory is well aware that this week’s fight with Mickey Ellison is set to serve as the toughest of his career so far – ahead of their highly-anticipated showdown on Wednesday’s huge #MTKFightNight.

The huge card is the latest action-packed event to come from Production Park Studios in Wakefield, and will be shown live in the US on ESPN+ in association with Top Rank, and worldwide on IFL TV.

McCrory (10-0, 4 KOs) enjoyed a successful 2019, topped off with stopping Steve Collins Jr to win the BUI Celtic super-middleweight title, but he knows full well he’ll have his hands full with in-form Ellison (12-2, 4 KOs).

McCrory said: “I’m very excited about getting the opportunity to fight on this show. I thought when lockdown first came into place I could be waiting a long time, so I can’t wait to be back.

“I’m expecting and have trained for a very hard fight. We have looked at a few videos of Ellison and definitely think we can put a game plan together to come out victorious.

“I think it will be strange fighting in front of no crowd as I always sell good tickets and have a good fan base. but we’re all in the same boat so it’s just about adapting to the surroundings.

“I see every upcoming fight as my biggest test so this goes to number one on the list of my hardest fights, but I’m hoping a win in this fight could lead to a shot at a European title, and then that could give me a top 15 world ranking.”

Dan Azeez has labeled Andre Sterling as a ‘clown’ and has vowed to knock him out when the two London rivals meet for the English light-heavyweight title on Wednesday’s huge #MTKFightNight event.

The massive card is the latest action-packed event to come from Production Park Studios in Wakefield, and will be shown live in the US on ESPN+ in association with Top Rank, and worldwide on IFL TV.

There has been plenty of bad blood between defending champion Azeez (11-0, 7 KOs) and Sterling (11-2, 4 KOs), and Azeez is promising to shut up his rival with a win inside the distance.

Azeez said: “This fight doesn’t go past 10 rounds. I’d be very upset if it does. I think he’s a clown. I know, and deep down he knows, that the belt stays with me.

“I don’t really get excited until fight night but it’s good to get the ball rolling again. It was a good end to 2019 for me and I want to build on that.

“It’s been a hard few months with everything going on, but I’m sure that it’s been the same for everyone. The delay has allowed me to study and focus on myself more.

“It’s going to be an entertaining fight but I’m totally confident in myself. I want a win in this fight to lead onto bigger things.”

London rivals Sterling (11-2, 4 KOs) and Azeez (11-0, 7 KOs) have sparred countless rounds together in the past, and that has given Sterling the confidence to make a clear statement prior to the bout.

Sterling said: “Between round six and eight he’s going. He hasn’t even done a proper ten rounder before. Who has he fought?

“We’ve sparred many rounds and he hasn’t ever got close to stopping me, it’s more the other way around. I know what he brings to the table and I’m going to be too much for him. I’m coming home with the belt.

“I’m very excited for this fight. Last year was all learning and experience. I’ve been focusing on myself and improving on my flaws and I’m ready to put on a good performance.

“Azeez will do what he has got to do, but I’m very confident. I’m going to win this English title and then I want to become British and Commonwealth champion too.”

Azeez vs. Sterling is part of a huge card on Wednesday, which is headlined by Akeem Ennis Brown and Philip Bowes meeting for the British and Commonwealth super-lightweight titles.