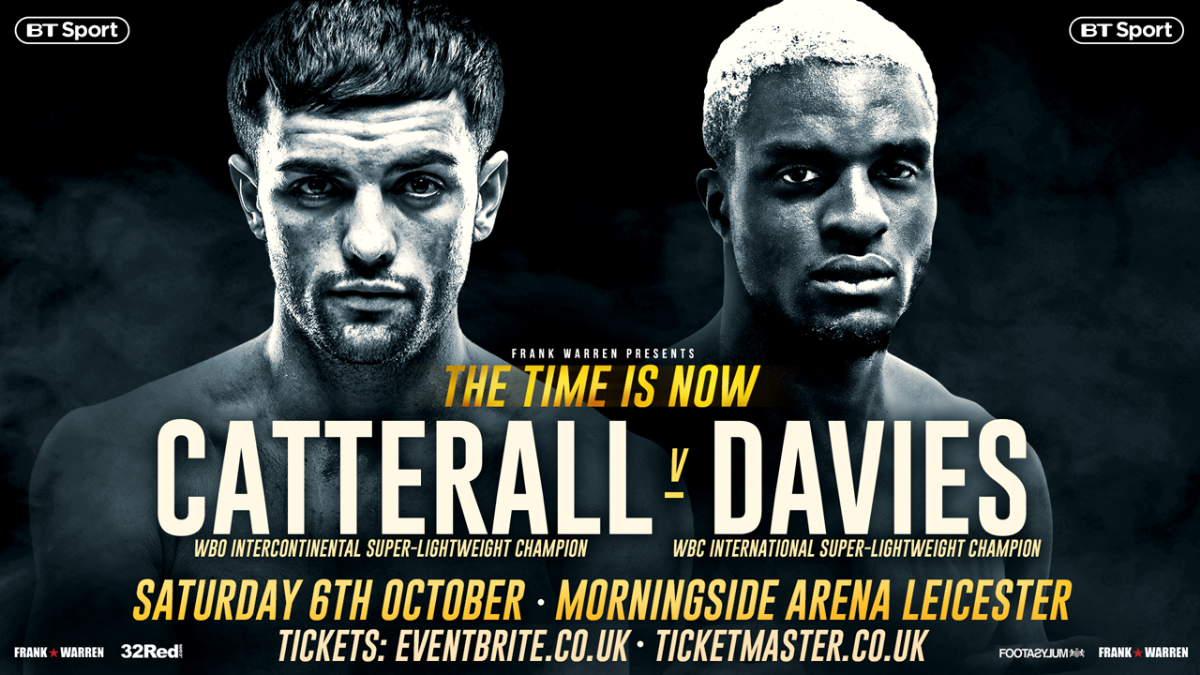 World-ranked super-lightweight Jack Catterall expects a surge of support when he takes on heavy-handed rival Ohara Davies on October 6.

With Davies dividing opinion in the past, Catterall feels his will be a popular victory.

Catterall said: “Everyone wants to see me beat him up. I know a lot of people are buying tickets for that very reason.

“Whether he’s talking or not, it really doesn’t bother me. I just love fighting and I love training too. That’s what I do.

“I understand that you have to sell a fight but people want to see this one anyway. He’s a noise outside the ring before and his name gets mentioned a lot. That’s his business.

“I’ve had fights in the past in which I’ve faced international opponents. They were good fights but nobody had heard of them and you have to promote yourself more to earn people’s interest.

“This fight is different. Because this is a domestic fight and he’s caused controversy, it does me a favour. I can sit at home and sell tickets and just get on with what I’ve got to get on with.”

It’s Good To Talk For Catterall

JACK CATTERALL has revealed that he is the man doing all the talking ahead of his big fight against Ohara Davies.

McKenna: This fight will change my life

The Chorley man believes regular chats with gym-mate Carl Frampton are playing a key role ahead of his WBO intercontinental super-lightweight title defence against the Londoner at Leicester’s Morningside Arena on October 6.

WBO ranked No 2 Catterall (22-0) and two-weight world champion Frampton are both trained by Jamie Moore and the Chorley ace said: “Carl’s win over Luke Jackson and Rocky Fielding’s world title upset has brought a good vibe in the gym.

“Carl has been at the highest level and I can pick his brains. I am not afraid of asking people like him questions.

“I have been at the side of him for a couple of camps and I have never been scared of going up to him and asking about opinions.

“My chats with Carl has definitely brought me on.

“I have been in the WBO rankings for a couple of years, I have earned my stripes and once I come thorough Davies I don’t believe that world title shot is far away.”

Catterall, 25, will be having his fourth fight under Moore which has so far yielded a pair of first round stoppages and a hard fought points win against Tyrone McKenna.

He added: “I feed off everybody’s energy and the gym environment is only going to help me learn and progress in my fight.

“McKenna was a good learning fight. It was only my third with the new team and the previous fights both only went a round.

“It was nice to get the rounds in with Jamie and Nigel Travis in the corner.”

Davies (18-1) has a reputation as one of boxing’s greatest trash talkers, but so far has stuck to his promise not to goad Catterall ahead of their much anticipated showdown.

Catterall says: “I couldn’t care less if he is ranting about me or keeping his mouth shut.

“It won’t make any difference to what happens in the fight and that is all I am focused on.

“It is going to be a tough fight. He has had some good wins over the last couple of years and he has power, but I believe in my ability to overcome what he has got.”

The Hackney man’s Twitter outbursts have made him Britain’s most controversial boxer and a target for many of his Super-Lightweight rivals.

Few believed Davies (18-1) when he faced off with Catterall at a press conference and told his rival he was safe until fight night.

Davies, 26, said: “I haven’t been tempted to start tweeting or saying stuff about Catterall.

“I feel that for this camp my mind is in a different place. I am focusing on the fight – not the cameras, the lights, fame or money like I have been.

“In the past my focus has been the pay cheque and the fame. Now the only thing that matters is not just getting the win, but making sure I win in good fashion.”

Davies is under new trainer Miguel Dapenticul, who hopes to have a licence to go in the corner by fight night to work alongside old hand Barry Smith.

Davies added: “It wont make a huge amount of difference . As long as I’m in the gym learning what I have to learn I know how to pull it off once I get in the boxing ring.

“As long as I get it right in the gym, I can pull off all the moves.”

If Davies triumphs he will take Catterall’s number two ranking with the WBO for their world title held by Maurice Hooker.

But before fighting for a world title he wouldn’t mind silencing Belfast’s Tyrone McKenna, who recently had a thriller with Catterall.

McKenna has been goading Davies, and the Londoner says: “To be honest, I am the man at this weight class.

“Anybody who fights me it’s the biggest fight of their career and their biggest pay cheque.

“I can understand why boxers keep saying bad things about me. It’s because everybody wants to fight me.

“Even though I have taken a loss, I am the most talked about fighter at 140lb. I am not too concerned who says what about me as long as I win my fights.

“I’m not being nasty about him, but one person calling me out is Tyrone McKenna. He has a little bit of a name and if it’s a fight he wants after I dispose of Catterall I’ll dispose of him and then move on to world level.”