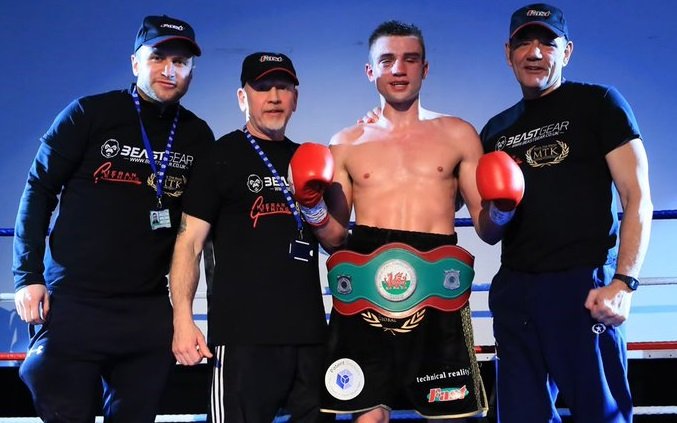 Welsh Area super-lightweight champion Kieran Gething (9-2-2, 2KOs) has catapulted himself into training for his next fight.

Although there’s no date set or anything concrete in place, the 26-year-old super-lightweight prospect is getting ready for his 14th professional fight now, in order to be ahead of the competition.

He said, “I have begun preparations for my next fight, without actually having any real date or confirmation yet, but I want to be ready.

“While the gyms are closed, training for me at the minute is long, cardiovascular work. Thankfully, I’ve got a punchbag at my mum’s place so I can use that without any risk. I’m also fortunate to have my brother, who is a fantastic coach and a good boxer, and can take me on the pads.

“So, I’ve been doing a lot of running and cycling, but I can’t do too much running because of my ankle – I was born with Talipes, so haven’t got full movement and can get painful grinding in the joints.”

Despite being born with the disability commonly known as club foot, Gething won national titles as an amateur, captained his country, and is the current national champion at 140lbs – a title he has held for a year now.

So, it’s clear he has had to battle against adversity to get to where he is today, “Yes, it has impacted me,” he affirmed. “I have to monitor and handle aspects of my training, mainly running, but it’s also affected my personal life. It affects my confidence because of the muscle wastage on that leg.”

Gething trains at Pontypool ABC with his long-term trainer, Lyndon James. Just like every other boxer up and down the country, they haven’t been able to work together due to the government restrictions in place.

“I’ve been keeping fit all this time anyway, but I really need the motivation of a fight date, but I am getting myself ready anyway to stay ahead of the competition.

“Without saying too much yet, there’s a real possibility my next fight will take place behind closed doors. It will be a lot different to the rest of my professional career so far, but I’d imagine it will be like the old amateur tournaments, like in Finland where there’s only about five people watching and all you can hear is your coach!

“I don’t think it will affect my performance like it would other boxers, because I don’t feed off the crowd, I feed off my own achievements and opportunities, not other people.”

There has been a lot of speculation about how boxing could return after the coronavirus pandemic, with obvious concerns over health and wellbeing. Events with large crowds will not be allowed to begin with, so promoters are getting prepared to stage shows without live audiences as well as reduced fights on the bill.

Despite the many restrictions and worries, Gething believes it could work in his favour, “I think the first show back will be huge! Everyone is going to tune in to break the monotony. So many people will watch because people are desperate to see some sports again!”

He further believes that the current situation will also play an advantage in his forthcoming fights too and he explained why: “The fitness of the fighters could be interesting because there’s not the normal setups available, such as regular sparring. I imagine it’ll be a mixed bag really; there’ll be some fresh fighters and some not. Timing will be affected the most, it might be hard for some fighters to get that sharpness back.

“I actually think the aggressive fighters with their chin uncovered, looking to knock people out, will be the affected most, because they won’t have that extensive sparring experience where they can get used to taking a shot. The good boxers, like Josh Taylor, should have an advantage with their good habits, so I think the schooled styles will benefit more than the aggressive fighters when boxing resumes.

“I was actually due to spar Josh before lockdown, so hopefully I’ll get to reschedule that when lockdown lifts. For this training camp I’ll be looking to get more high-intensity sparring, I want to take myself out of my comfort zone and travel to a few places to spar with as many different fighters as I can.”

The busy boxer, who has had 13 bouts in just three-and-a-half years, which has included four 10-round contests – two of which were for the Welsh Area championship at welterweight and super-lightweight – is a business owner and a family man with two young daughters. His construction company – G. Gething & Sons – is named after his late father, Gary, who was also a professional boxer.

“I’m in the midst of changing the setup in my business so my manager can take over while I’m training to eliminate any distractions. I’ll be concentrating on getting my weight down first and reaching a good level of fitness over the next few weeks.”

Gething was last in action in the quarter-finals of the MTK Golden Contract Tournament where he drew with former Southern Area lightweight champion Jeff Ofori (10-2-1, 3KOs) over 10 rounds. Unfortunately for Gething, referee Kieran McCann chose to put his opponent ‘Jeffy’ through to the next stage of the competition with his deciding vote to face Ohara Davies.

Despite the disappointment, he enjoyed the experience of the big event televised live on Sky Sports and has marked Ofori as a future opponent to even the score against one day.

Although 2020 has seen many plans withdrawn, Kieran still has staunch strategies in place for his pro career, he stated, “My goal this year is bring home a major title, such as the Commonwealth and British. I am also interested in the European Union belt, as it’s a WBC primer so can get you into the world rankings.”