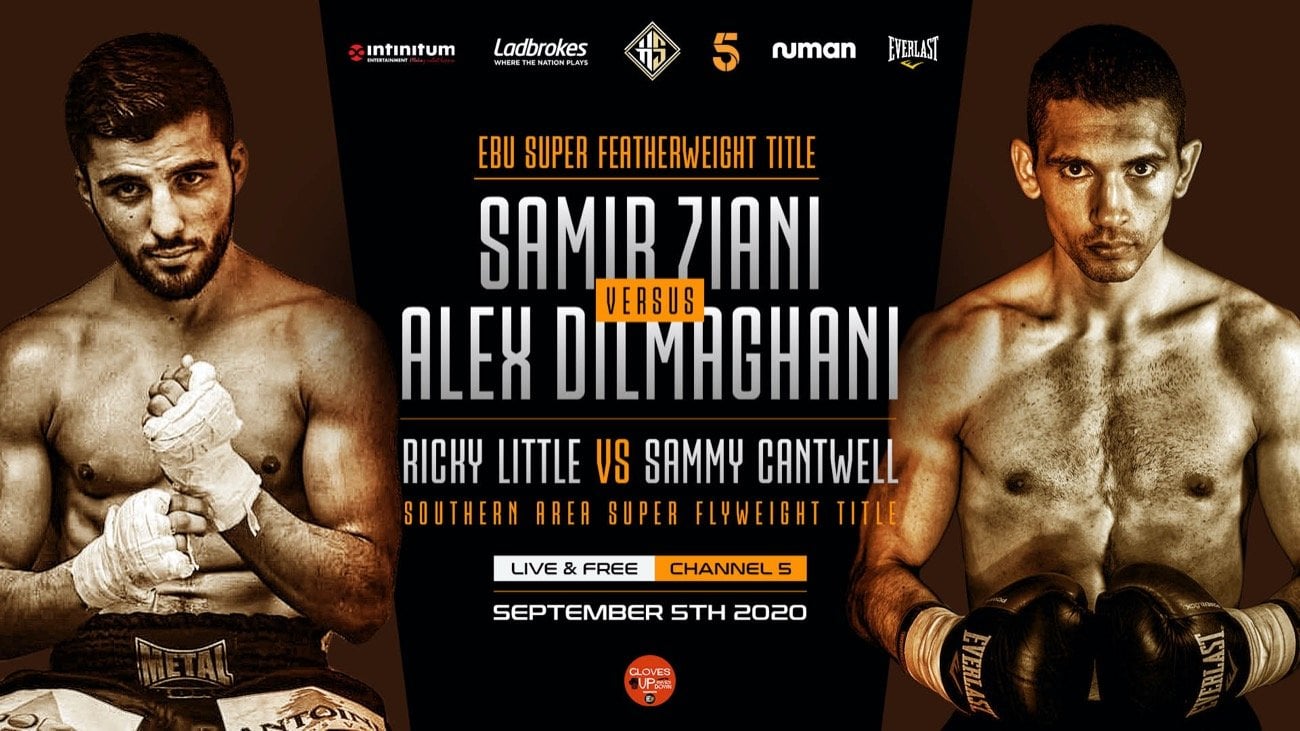 Hennessy Sports are excited to announce the extension of it’s successful partnership with leading boxing digital publisher Seconds Out for this Saturday’s show headlined with the European Super-Featherweight Championship showdown between Samir Ziani and Alex Dilmaghani.

The show will take place at the LS Live TV studio in Wakefield with the Ziani-Dilmaghani main event televised exclusively live on free-to-air Channel 5 at 10pm followed by the all-action cruiserweight title contender Isaac Chamberlain. The undercard fights will again all feature in some capacity in the programme.

During fight week, Seconds Out will produce original content for its exclusive Boxing Unlocked series to capture behind the scenes footage of the fighters’ and their camps as they quarantine in the fight hotel.

Promoter Mick Hennessy, who brokered the agreement with Seconds Out for his event two weeks ago – headlined by Shakan Pitters against Chad Sugden for the British Light-Heavyweight Championship – is thrilled to continue the partnership.

He said, “I was delighted with the original content produced by the Seconds Out team for the build up to Pitters v Sugden and look forward to them joining us for a great show this Saturday night headlined with Alex’s challenge for the European Super-Featherweight title. The whole undercard featuring Idris, Michael and Stevie can be viewed exclusively live on the Seconds Out YouTube channel and then switch over to the main event live on Channel 5 between Samir and Alex plus Isaac and again an opportunity to see the undercard. For the boxing fan, this is great news as it will guarantee that they will get to see every fight live on the night.”

“As a forward-thinking digital brand, Seconds Out is continually looking to create added value for our viewers,” said SO Director of Content Danny Flexen. “Providing boxing fans with the opportunity to watch an exciting set of fights, live and at no cost, is the latest example of this. We are grateful to Channel 5 and Hennessy Sports for their assistance in giving back to the boxing community in these extraordinary times.”

The title fight will feature on the card headlined by Alex Dilmaghani’s challenge for the European Super-Featherweight title against Champion Samir Ziani, exclusively live on free-to-air Channel 5.

Bexleyheath’s Cantwell (7-1-1, 3 KO’s) was due to face Southampton’s Little (5-2-1, 1 KO), the Southern Area Champion, on April 25th in Crystal Palace, but the show was subsequently postponed due to the COVID-19 pandemic.

Sammy, son of Mickey, the popular 90s British Flyweight Champion and four-time World Title Challenger, is thrilled that the fight has been rescheduled and is ready to claim his first title. And Mickey will be also working Sammy’s corner on the night of the fight.

“It’s fantastic that Mick has kept the title fight and I can’t wait to get in the ring. It’s been a very challenging time for everyone, but I’m thrilled to still be fighting where many boxers aren’t able to return to the ring yet. It will be strange without a crowd as I have a massive fan base, but I’m going all out to take that title from Little,” Said Cantwell.

Little said, “I’ve kept in shape throughout as I knew the fight would eventually come off so I’m ready right now for Cantwell. He wants the title so I’m expecting him to come in fully fit and prepared because he’s in for the fight of his life if he thinks he’s taking my title.”

Promoter Mick Hennessy added, “This could turn out to be a war between the pair, they have the biggest hearts and fight at a frenetic pace which could prove to be a real exciting fight between them. The show is complete now with Alex’s challenge for the European title as the headliner which I also expect to be a real thriller as both men are fully charged-up for the fight. With Isaac looking to make a statement in his return, plus my son Michael, it’s a cracking show, live and free on Channel 5.”