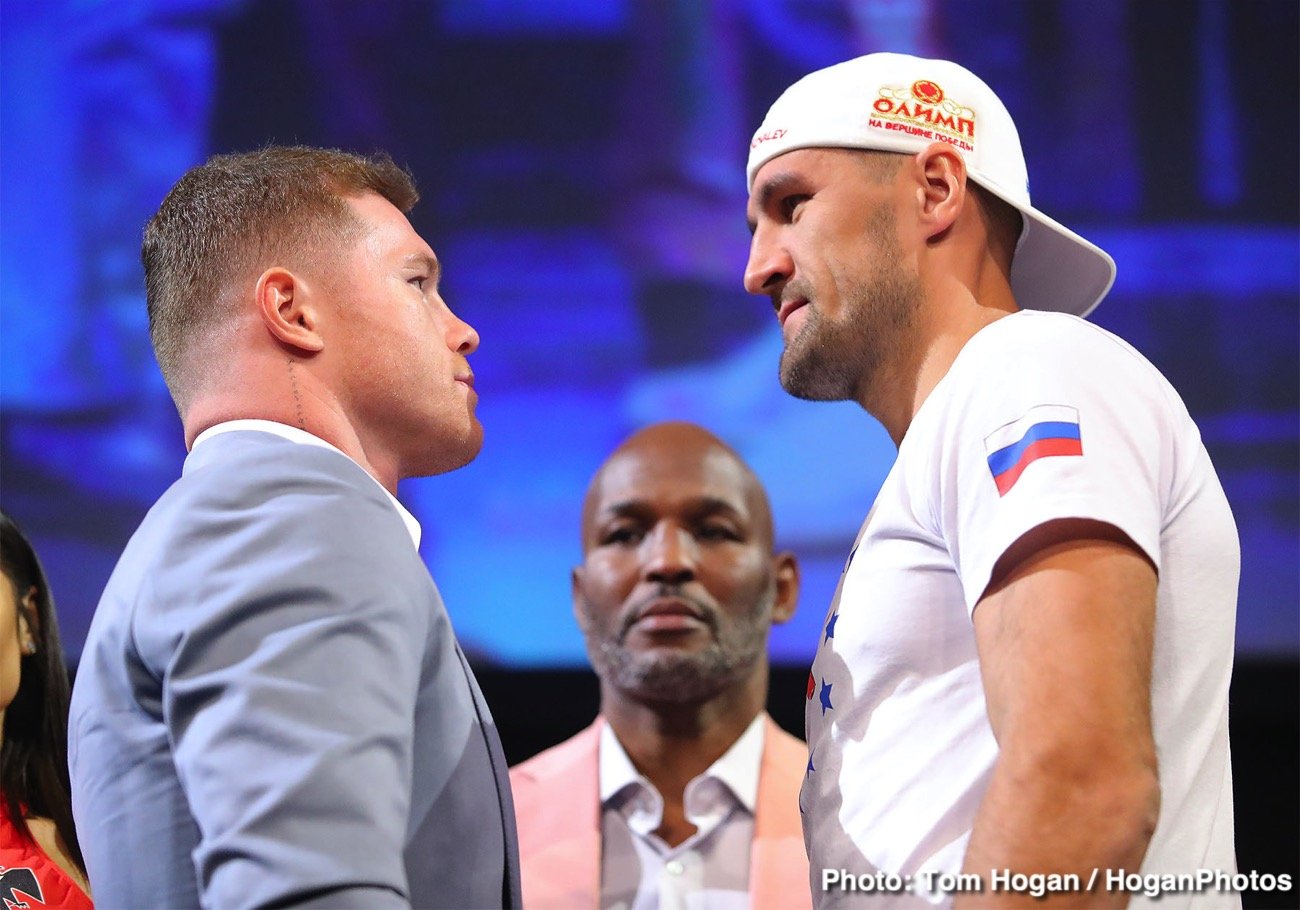 This Saturday night Saul ‘Canelo’ Alvarez challenges Sergey’The Krusher’ Kovalev from the MGM Grand Garden Arena in Las Vegas, Nevada streaming live on DAZN. Is Alvarez catching Sergey Kovalev at the perfect time late in his career or will size matter? The fundamentals generally standout in fights involving weight jumps so the jab will be need for both men.

Out of the 11 middleweight champions to attempt a move up to light heavyweight, only 6 were able to accomplish the feat. Canelo has fought above the 160-mark twice against mediocre at best opposition in Rocky Fielding late 2018 and Julio Cesar Chavez Jr. May 2017. This high risk high reward move by Canelo could ultimately result in Alvarez being done at 160, something DAZN’s head honcho John Skipper couldn’t be thrilled with. Of course Canelo could be slow and stiff at 175 and may just be jumping weight classes for this one legacy fight. Time will tell of course and lucky for us fans will get to find out shortly.

Sergey Kovalev’s run as a top-shelf light heavyweight has been impressive to say the least. Facing names such as Bernard Hopkins, Jean Pascal, and Andre Ward pretty much seals his fate as a Hall of Famer. Obviously Kovalev’s outside of the ring issues could play a part moving forward of how the public views him.

When it comes to inside that 20 x 20 ring the writing seems to be the wall of the decline for Kovalev. At this later stage of a rock solid career can Kov summon the strength mentally and physically? More than a tip of a cap, if Sergey can upend Canelo it will be remembered for a long time. Finally Kovalev is getting a huge payday after taking short money in his biggest fights.

It’s no secret that Kovalev’s jab is hands down the most important key to this fight. Sergey’s stiff jab has plenty of speed and funk on it to help keep Canelo away from his midsection. It’s crazy to think that a helluva boxer amply named ‘The Krusher’ is seen as a shot fighter if the action takes place at close range now.

Andre Ward’s body punching brigade especially in their second meeting exploited a huge weakness in the Russian native. The elephant in the room is some of those body shots strayed below the belt. Because this a Las Vegas and this is the sport of boxing, it should come to no surprise that the same referee from that fight Russell Mora, will be in charge of the action on Saturday.

Another recent fighter to give Kovalev hell was Eleider Alvarez in their first meeting in August 2018. It should be noted although Kov was stopped by Alvarez, but he produce one of his best performances in the rematch. Kovalev looked fairly good back in late August until an inexperienced Anthony Yarde had him on the verge of a stoppage.

The connection between Sergey Kovalev and Buddy McGirt has been just what the doctor ordered in the ring anyway. Buddy has made it known they won’t be looking to be just the bigger guy and plan on fighting smart.

Beyond a Rocky Fielding fight, Canelo went from Gennadiy Golovkin back to back and unified with Daniel Jacobs on Cinco De Mayo weekend. Canelo’s chin and stamina, an issue for him in his past, held up quite nicely versus those big punchers. That said it’s difficult to judge how Alvarez will take Kovalev’s power all the way up to 175.

Say what you want about Canelo’s failed PED test and how the judges favor him clear as day, undeniable the last several years Canelo’s skills have been sharpened. Defensive head movement and countering ability along with a dedication to body punching has made Canelo a more complete boxer. We still can’t say for certain that Canelo can cut off the ring because he hasn’t faced a Floyd Mayweather or Erislandy Lara style since.

Regardless of how we think Kovalev is on the down slope fighter spirit wise, this jump to 175 is still pretty freaking cool and definitely a calculated risk. Sure, Kov won’t get much credit if he beats Canelo, he will have a healthy bank account and receive a significant profile boost.

This boxing podcasting junky thinks Kovalev’s jab and subtle movement will get him ahead out of the gates. Maybe not on all 3 official scorecards but you know what’s being implied. After a few rounds the intriguing parts of the matchup on paper will take shape. Kovalev is a larger human than Canelo, standing a full 4 inches taller but surprisingly Sergey has only a 2 inch reach overall.

Once Canelo can catchup to the jab of Kovalev, he will start to time it as he inches his way closer and closer to attacking the body. Don’t be shocked to see a mobile Canelo looking to defend and counter off the ropes as he did for a large portion in the first fight with Golovkin. At the end of the day as long as Canelo is badly hurt he should be able to win on the cards for obvious reason whether it plays out that way in the ring is another story. Canelo’s versatility will be the difference maker and the main reason he gets the nod on Saturday.

My Official Prediction is Canelo Alvarez by Majority Decision.

Side Note: Don’t forget to DVR Berchelt vs. Sosa on ESPN and Castano vs. Omotoso on FS1.