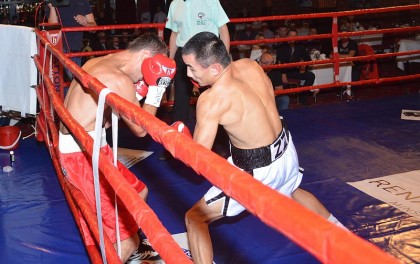 KAZAKH wrecking machine Zhanat Zhakiyanov continued his march towards a world title shot with a blistering one round blow out of Georgia’s previously unbeaten Gagi Edisherashvili in Minsk on Wednesday night.

Zhakiyanov, fighting under the stewardship of former two weight world champion Ricky Hatton for the fourth time, set about his younger foe from the first bell and soon had him pressed against the ropes.

A series of shots from both fists saw Edisherashvili covering up before a brutal body blow finished things.

The victory meant Zhakiyanov added the vacant WBC EPBC bantamweight title to his European crown and remains on track for fights against the elite of the division.

Zhanat will be back in action against Australia’s former Commonwealth title challenger Fred Fundraby on the big Rabchenko v Mundine undercard in Melbourne on November 12 and another win will likely see him box for a world title in early 2015.

“Zhanat has shown yet again just what a devastating puncher he is,” Ricky Hatton said. “Not many bantamweights will have seen this fight, but those that have will be thinking ‘I don’t want to get in the ring with him’.

“Since he’s been with me he’s really developed and although he got rid of this guy quickly, he showed a few of the things we’ve been working on in the gym.

“I think if he keeps improving at the rate he is then he’ll have too much for Mundraby in Australia and the sky will be the limit for him next year.”

On the undercard, Hatton Promotions’ Belarusian light-welterweight Kirill Relikh took his perfect record to 17 wins with 15 KOs by stopping George Abramishvili in the second round, some feat considering that Abramishvili went the distance with undefeated Ukrainian welterweight Valey Brazhnik earlier this year. Sonny Upton scored a fifth round knockout of Vazdim Astapuk and sibling Anthony Upton beat Siarhei Afonin on points over four-threes.