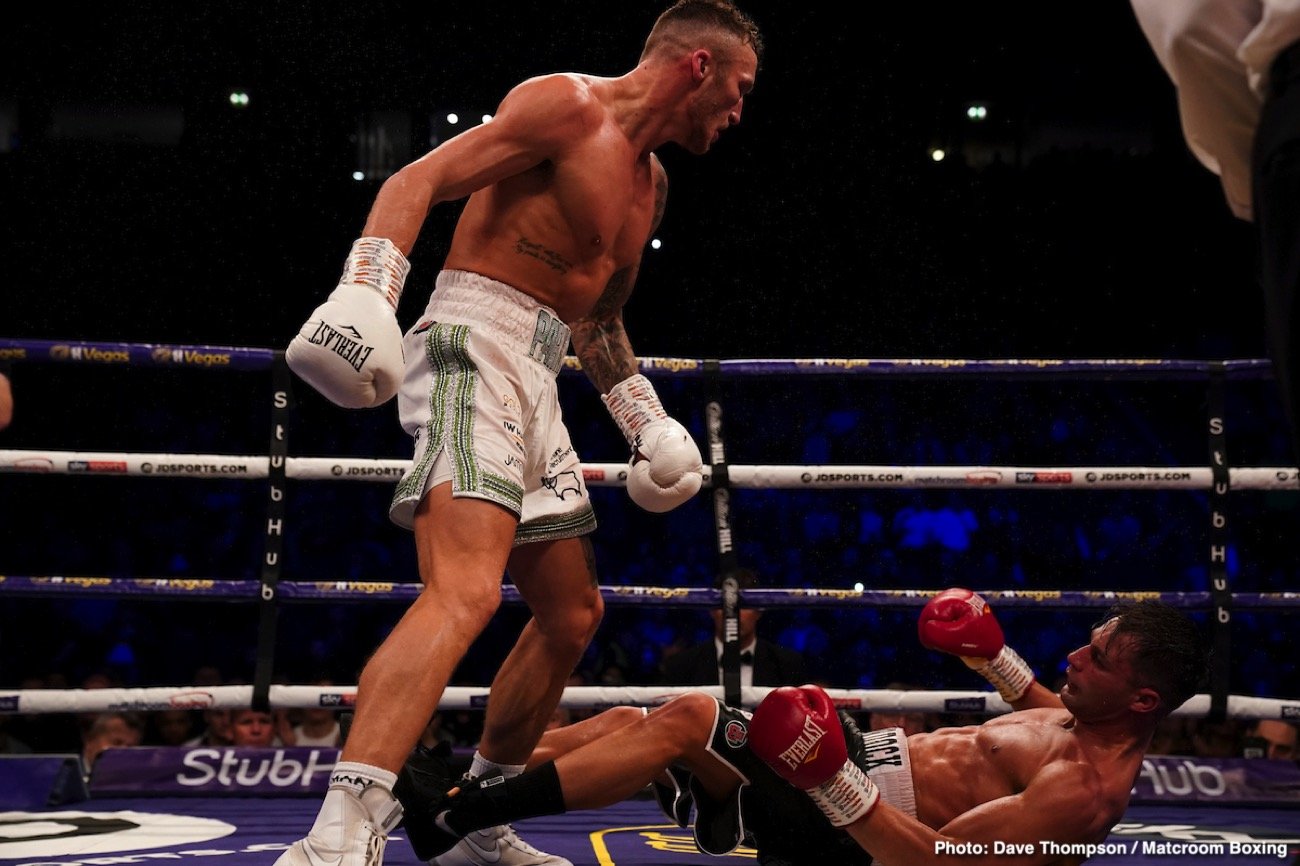 ZACH PARKER WOULD happily take on the best of British at Super-Middleweight if he is forced to wait for a World Title opportunity.

Parker, No.1 ranked by the WBO, returned to the ring in a fearsome fashion at the end of March by obliterating the defences of the typically durable Vaughn Alexander, who had not previously been stopped, inside of two rounds at the Copper Box on his Queensberry and BT Sport debut.

Coming off a year of inactivity, it was an emphatic statement of intent that he is keen to build on with a couple of marquee matches ahead of his world title mandate.

Top of the list of big names that Parker would be keen to knock out are John Ryder, Rocky Fielding and Chris Eubank Jr.

Eubank Jr, who has dabbled across super middleweight and middle since the beginning of 2017, is himself ending 17 months of sitting on the sidelines when he takes on Marcus Morrison in a comeback assignment on May 1.

There would be a neat symmetry to Parker entering into a leather trade war with Eubank Jr because their fathers fought back in 1988 at the Effingham Park Country Club, where the future world champion scored his sixth professional victory via a first round KO.

Parker, 26, would have no issue in rekindling the family affair now he is back firing on all cylinders if he is to be held in a queue for his shot at the WBO world title currently held by Billy Joe Saunders, who is about to embark on a unification mission against Saul Alvarez.

“If the World Title came about for my next fight I would want it, but if I am waiting around I want to get on with my career and get some more fights in,” reasoned the Derbyshire native. “With every fight I will keep getting better and better with more experience.

“You can’t put your career on hold and have to push on, so that is what I’m going to do.

“I want to be a bigger name in Britain so it would make sense to go for the big British clashes. People like Chris Eubank Jr., John Ryder, Rocky Fielding – there are quite a few. If the fight is right, I am up for any of them.

“With Eubank, my dad obviously boxed him when he was a pro, so it would be a good fight, me and him. I am one hundred percent confident I would beat him and would probably stop him late.

“I have got a lot of self-belief and I know what I can do. People who are with me see it and now I just want to show it to everyone.

“He gets everyone talking, especially if there is some bad blood about it. That is what I want in boxing, I want to get my name out there a lot more and if big fights are there to be made then that is what I am going to do.

“I am gonna put on a performance like nobody has seen, so you will have to wait and see,” added Parker, who pointed out that his dad Darren’s fight CV amounted to much more than a modest 3-7-1 record as a pro.

“The Eubank Sr. was six years before I was born and my dad has mentioned it a couple of times because he used to be my trainer and he took me through the amateurs. He doesn’t talk much about his career and he focuses on me.

“He had around 200-300 amateur bouts and won by stoppage in a 100 of them at least. Everyone used to call him the ‘Bodysnatcher’ and, in those days, people used to box every single week and there weren’t many championships or stuff like that.

“He was managed quite hard as a pro, what with fighting Eubank and then Cornelius Carr, so he was put in there with the top dogs. He is now giving me pointers so it is good to have a boxing background in the family.”

Parker’s own progression will be accelerated following his link up with Frank Warren and he was delighted to deliver an eye-catching performance on his opening night.

“Obviously I am absolutely buzzing to have got back out there, especially with a new TV company and a promoter in Frank Warren. From what I have seen on social media, I am glad everyone enjoyed it and I am just so happy to be back.

“A lot of people said it would go the distance or maybe a late stoppage if I could catch him, but I caught him right at the end of the first and capitalised on it into the second to get a good win.

“He was saying to my trainer at the weigh-in ‘I’m gonna knock your boy out’ and stuff like that so he was there to try and beat me.

“I can’t wait to get back out there now because it was a quick win. I wanted to get a couple more rounds in to get the cobwebs off, but I did feel back to normal in there.

“You want the knockouts to get some excitement about you and now I want to push on to big fights and bigger titles.

“I had a little chat with Frank straight after before I had to do the BT stuff and he said he was happy to have me. I am happy to be part of the team now after flying under the radar for so long and next time hopefully more people will tune in to see me.”

BRITISH and Commonwealth champion Lennox Clarke admits that he understands why world champions are “hiding” from fellow Super-Middleweight Zach Parker.

Clarke, 29, stunned hot prospect Willy Hutchinson in March, knocking out his Scottish rival in five exciting rounds in a huge upset to become a double champion.

He credits sparring hundreds of rounds with Frank Warren stablemate Parker, the number one contender for Billy Joe Saunders WBO World Super-Middleweight title for part of his success.

“If I was a World champion I would carry on hiding from Zach Parker,” declared Clarke who hopes to make the first defence of his shiny new belts in June.

Halesowen’s Clarke added: “I have sparred with Zach the most. We bang the hell out of each other and we’re both friends, but I would put Zach on top of all them kids. That is me being honest.”

“We have real wars and when we stop everyone in the gym is clapping.

“Liam Williams and myself have sparred loads of rounds and he is a really good aggressive kid.

“All the spars I have are competitive, but Zach deserves the praise the most. He is the man right now.”

Training alongside Parker at the BCB Gym in Wednesbury has also given former white collar boxer Clarke the belief he can reach for the stars and get to world level.

Clarke said: “I’m a white collar kid and I’ve already over-achieved, but I’m hungry and happy for the opportunities Frank will get for me.

“Hopefully my rawness can take me further. I won a IBO Intercontinental title against Jahmaine Smyle and I wasn’t happy with that. I never paraded it.

“Nathan Heaney has now got the same belt and parades it around like he’s a World champion.

“That was nothing for me. The British title is something for me, but I have not plateaued. I am hungry and my mentality is that no one can beat me.”