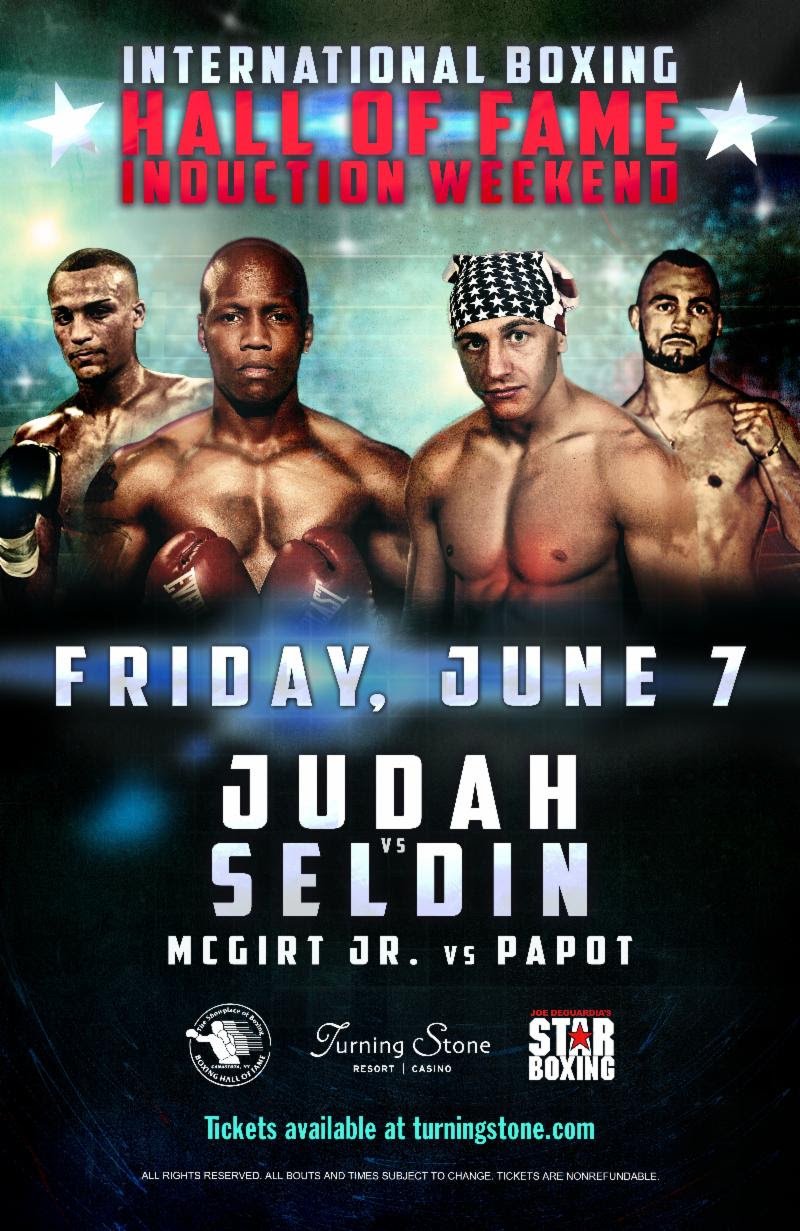 International Boxing Hall of Fame Induction Weekend is right around the corner and STAR BOXING is pleased to announce the undercard for the highly anticipated event, set to take place at Turning Stone Resort Casino on June 7th. The main event features six-time world champion, and the last Undisputed Welterweight Champion, ZAB “SUPER” JUDAH (44-9 30KO’s) against New York knockout artist, CLETUS “THE HEBREW HAMMER” SELDIN (23-1 19KO’s). The two will do battle in a 12-round bout, with the vacant NABA Super Lightweight Title up for grabs. In the co-feature, #8 WBA rated, undefeated Frenchman, DAVID PAPOT (22-0 3KO’s) will face veteran, JAMES “BUDDY” MCGIRT JR. (27-3-1 14KO’s), son of Long Island’s first world champion “BUDDY” MCGIRT, for the WBA Intercontinental and WBO International Middleweight Titles in a 12-round bout, who is being inducted to the Hall of Fame during the fight week induction ceremony.

In an 8-round lightweight bout, Italian sensation, “SUPER” MARIO ALFANO will be making his United States debut against a tough opponent in LAVISAS “RED” WILLIAMS (Rochester, NY 8-1-1 3KO’s). The 28-year-old Italian earned the Italian National Super Featherweight Title in 2016, and successfully defended it in the same year. Alfano comes to the USA with the hopes that being seen on a world stage will expedite his opportunity at cracking into the upper level of the super featherweight/lightweight rankings. Williams is looking to avenge the first loss of his career at the hands of O’Shaquie Foster, knowing that a win against an undefeated fighter in Alfano will be one of, if not the best, of his young career.

Star Boxing’s undefeated, rising super middleweight, WENDY “HAITIAN FIRE” TOUSSAINT (9-0 4KO’s) is a highly-regarded prospect that many believe may be a future world champion. He is coming off a 12 month layoff due to an injured hand. Toussaint has developed into a well-rounded fighter and his last 4 fights have been via TKO’s. Opposing the Haitian born Toussaint will be LUCIUS “BULLDOG” JOHNSON (Compton, CA, 4-5-1 3KO’S). Johnson has a deceiving record, with combined opponent record of 62-7-6. Toussaint will be the seventh undefeated fighter that Johnson will take on. This scheduled 6-round super middleweight bout is expected to be a thriller.

The Sengalese welterweight, now fighting and training out of Cincinnati, Ohio, BOUBACAR SYLLA (9-0 7KO’s) will be fighting in New York for the first time, having recently defeated Brooklyn prospect, Marlon Brown. The 6’0″ prospect was born in Dakar, Senegal and will be campaigning at the 147 lb. division as the 24-year-old continues to rise the ranks. He will face tough Texan MARQUIS “THE HAWK” HAWTHORNE (7-10 1KO). Hawthorne has faced almost exclusively highly rated prospects in his career, with a combined opponent record of 96-27-5, of which twelve of his seventeen opponents have been undefeated. He recently handed highly regarded prospect Ronnie Austion his first loss in a massive upset this past January. This bout is scheduled for 6 rounds in the welterweight division.

In a special attraction battle of undefeated fighters, ROBERT DURAN JR. (2-0 2KO), son of boxing legend, ROBERTO DURAN, will step in for his third professional bout, against JONATHAN PIERRE (3-0), in a four round welterweight bout. No-one has been able to take Duran Jr. the full distance as his two wins have come by TKO, and Duran has the added benefit of having already fought on a big stage when he shined on ESPN + in his last bout. Pierre plans to be unphased by the Duran mystique, and says he will continue on his undefeated path, with a fourth victory against the son of the boxing legend.

TICKETS:
Boxing fans will also have an opportunity to mingle with some of the biggest names in boxing, including boxing VIPs and Hall of Famers. Turning Stone will offer a unique boxing fan experience for guests who purchase tickets for the June 7thJudah vs. Seldin fight. For $50 (plus the purchase of a ticket), guests will receive access to the Boxing Hall of Fame Lounge, where boxing VIPs will be socializing throughout the night.