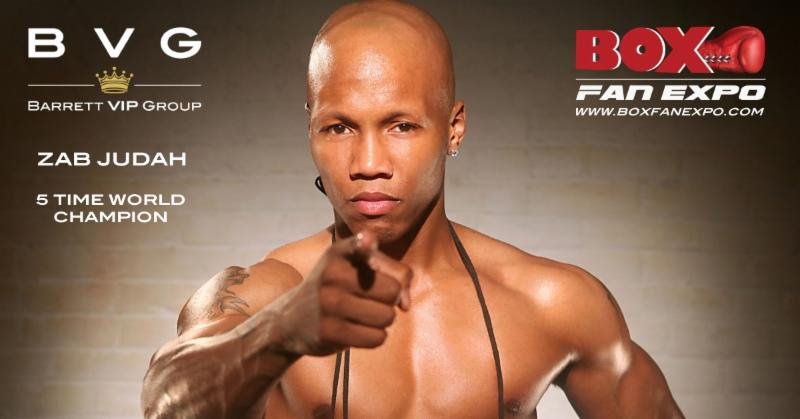 Five-Time World Champion Zab Judah has confirmed that he will appear at the “Barrett VIP Group” booth and hold a Meet & Greet with his fans at the Las Vegas Convention Center for the 4th edition of Box Fan Expo that will take place Saturday May 5, 2018 from 10am to 5pm, during Cinco De Mayo fight weekend.

Judah will once again appear at this year’s Expo, where he will be will be signing gloves, photos and have merchandise for fans to enjoy. Boxing fans will also have a great opportunity to take pictures with this boxing star also known as “Super”.

About Barrett VIP Group
Barrett VIP Group also known as BVG was co-founded in 2018 by former world heavyweight champion Monte Barrett. BVG is a unique concierge services that specializes in providing fight night experiences, catered to the needs of their clients that are looking to get close to the action and get the ultimate adventure with customized or pre-selected sports packages. BVG has close relationships with prominent fighters from past and present, which allows to provide their clients the best possible treatment, in an up close, personal and action-packed setting. BVG is based in Manhattan, New York. For more info go to http://BarrettVipGroup.com.

Exhibitors such as boxing gear, apparel, new equipments, energy drinks, alcohol, supplement products, broadcasting media, sanctioning bodies and other companies who wish to participate will once again have a chance to showcase their brand to fans, media and the boxing industry.

Tickets to the Box Fan Expo are available online at:
https://boxfanexpo.eventbrite.com

Box Fan Expo is the ultimate boxing fan experience event, which allows fans to Meet and Greet Boxing Superstars of today, current and former world champions, Legends of the sport and other boxing Celebrities at their booth. On Site, fans will experience different activities from Autograph Sessions, Photo Sessions, FaceOff with your favorite boxers, as well as a chance to purchase merchandise and memorabilia from their booth, plus so much more… you won’t want to miss this must-attend Expo!

Throughout the next several weeks leading up to the Event, there will be weekly updates on the many stars that will commit their appearance at the Boxing Expo. And for anyone in the Boxing industry or other Exhibitors (non-industry), who would like to be involved and reserve a Booth, contact Box Fan Expo: