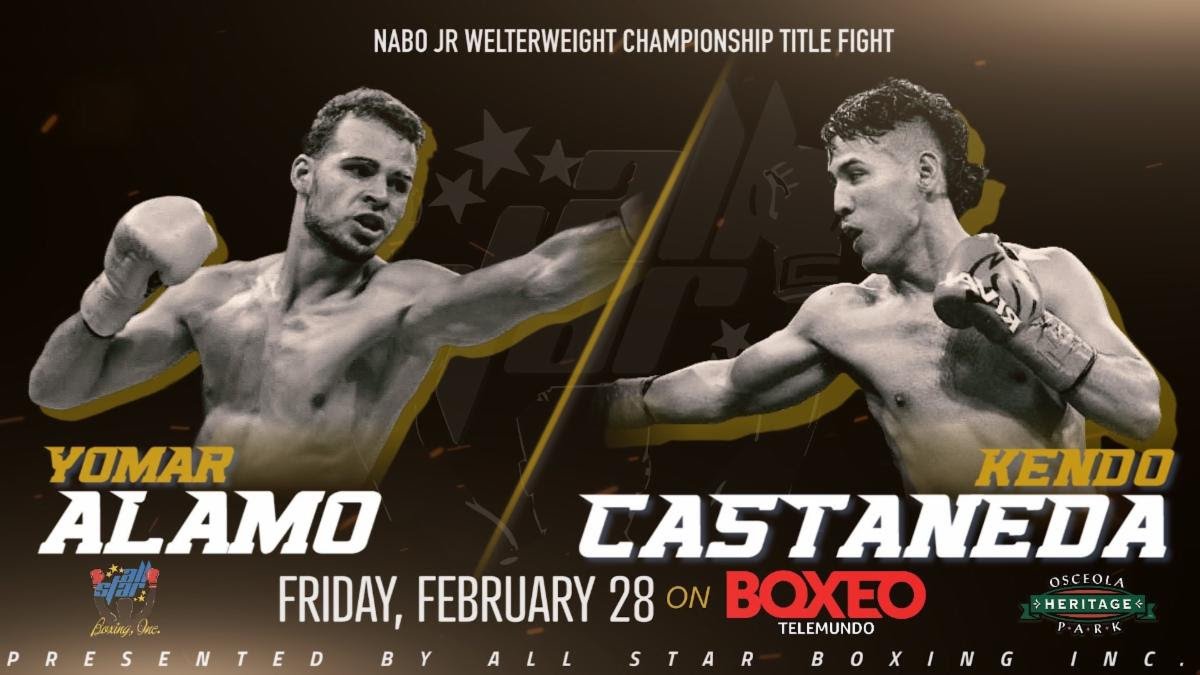 Miami- February 26, 2020- “Boxeo Telemundo,” the #1 Spanish-language boxing program in the U.S., continues this Friday, February 28 at 11:35 p.m. on Telemundo, featuring two undefeated fighters as they battle for the jr. welterweight title. WBO #8th ranked NABO champion Yomar “The Magic” Alamo (17-0-1 12 KO’s) puts his title on the line after a successful 2019 season, squaring off against Kendo “Tremendo” Castaneda (17-0 8 KO’s), live from Osceola Heritage Park Events Center. This will be Castaneda’s debut on “Boxeo Telemundo” and one of the most important matches of his career to date.

All fights will be broadcast live on Telemundo and live stream on Telemundo Deportes En Vivo app with additional extensive news and content on TelemundoDeportes.com, including access to the weigh-in and exclusive behind-the-scenes content. In addition, short form content that include fighters, behind the scenes and news will be produced exclusively for Telemundo Deportes’ social media platforms using the hashtag #BoxeoTelemundo.

Orlando “Zurdo De Oro” Gonzalez (13-0 9 KO’s) will be making his first appearance this year as he takes on Charlie Serrano (16-5-2 5 KO’s) in an 8 round Featherweight bout. The bout will serve as the co main event of the night.

Other bouts on the card will feature stablemate Henry “Moncho” Lebron (11-0 9 KO’s) battling against Recky Dulay (11-7 8 KO’s) over 8 rounds. The night’s special attraction will feature local favorite Christian “MC” Camacho (8-1-1 1 KO) in a 6 round bout against an opponent to be determined.

Debuting in 1989, “Boxeo Telemundo” has grown to become the #1 boxing sports program in the U.S. among Hispanics, across broadcast and cable landscape. Since its launch, “Boxeo Telemundo” has broadcast over 350 title fights, showcasing some of the biggest boxing stars as they rose to stardom and won their first championship titles, earning a reputation as the show “where champions are born.” Among these stars is Saúl Canelo Alvarez, who won his first pro boxing title on “Boxeo Telemundo” in 2008. Other notable Champions featured include Juan Manuel Marquez, Diego Corrales, Carlos Maussa,  Floyd Mayweather,  Israel Vázquez,  Wilfredo Vázquez,  Rafael Ruelas,  Jorge Solis and many others. In addition, renowned boxing Hall of Famers have also appeared on the show including Erik Morales,  Marco Antonio Barrera and Felix Trinidad.