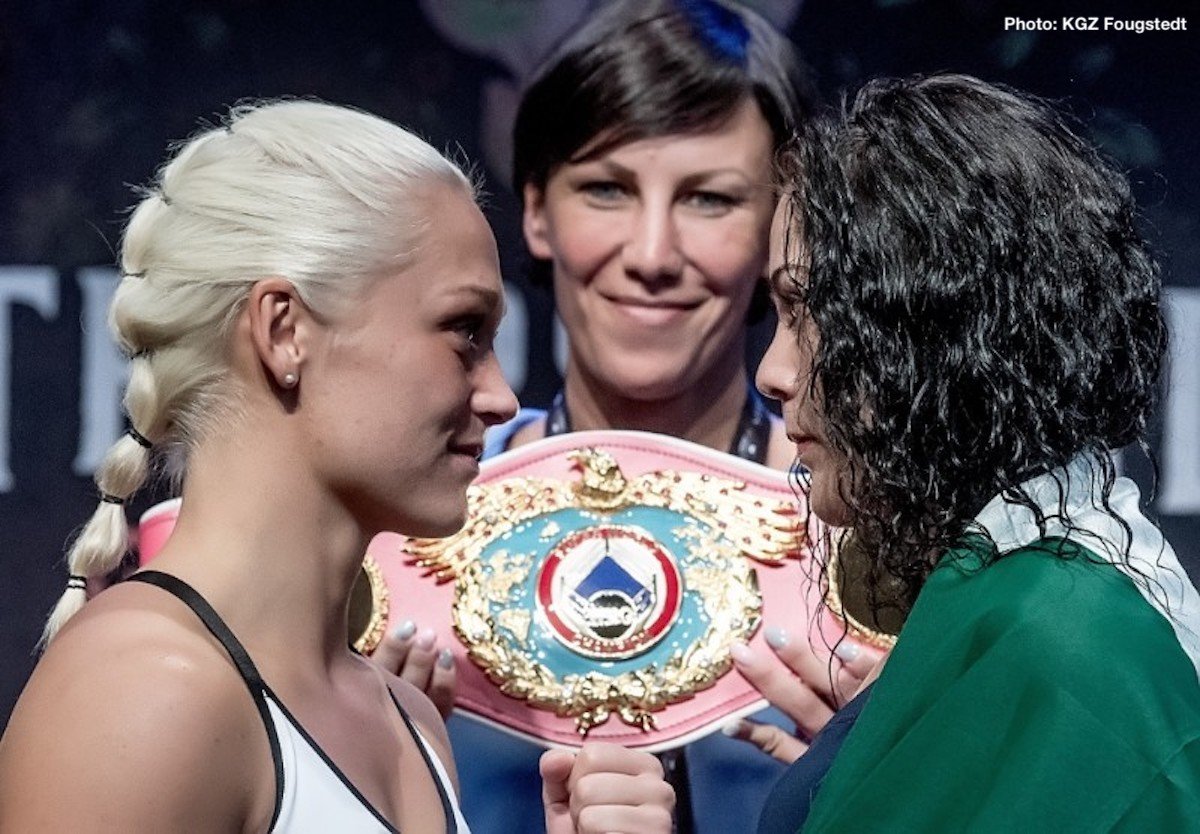 Dina Thorslund (11-0, 5 KOs) and Yessica Munoz (17-1-1, 5 KOs) both made weight today ahead of their WBO Female World Super Bantamweight Championship clash tomorrow night at the Struer Energi Park in Denmark.

Thorslund, who claimed the interim WBC World title with a unanimous pints win over former two-time World Champion Alicia Ashley in March, returns to her hometown arena to meet the tough Mexican Munoz for the WBO crown.

The undefeated 24 year-old has predicted an all action affair against ‘La Gacela’, who says she will drag Thorslund into a war before defeating her and taking the WBO belt back to Agua Prieta.

All the action will be available to watch live on Viaplay, TV3 Max and TV3+ in Denmark and Sport1 in Germany. Limited tickets are still available via www.ticketmaster.dk.

News:
Yarde vs Arthur LIVE on BT Sport on Dec. 5

Yessica Munoz (17-1-1, 5 KOs) has arrived in Denmark full of confidence ahead of her WBO Female World Super Bantamweight Championship clash with local hero Dina Thorslund (11-0, 6 KOs) on Saturday at the Struer Energi Park.

At a press conference today in Copenhagen, Munoz says there is no doubt she will be taking the WBO’s World title home, and believes her Mexican heritage will prove the difference in Saturday’s championship contest.

“This is a World title fight so of course I am well prepared,” said the 27 year-old from Agua Prieta, who is accompanied by coach Francisco Garcia. “I’ve had a good training camp and done everything possible to ensure the belt will be coming home with me to Mexico.

“This fight will be the first war Dina has been in. I have not come from Mexico to play around in the ring. I am ready for war. Dina has never faced a Mexican warrior like me. My Mexican blood will be make me win this fight!”

Thorslund, who returns to the ring following her interim WBC World title win over Alicia Ashley, believes she is up to the challenge, and says she is ready to maintain her unbeaten record and add the WBO crown to her collection.

”My preparations have been really good. The best I’ve ever had. I’ve trained more rounds than ever before, and have had a lot of quality sparring at home and abroad so I am ready to take the title.

“I know Munoz is a come forward fighter, so I expect a lot of action. She’s a warrior, like me. She will want to meet in the center of the ring and fight, and so do I. There is a lot on the line for both of us so it will be a great fight.”

Thorslund will be fighting in front of her home fans for a third time having previously claimed the WBC Youth and interim WBC World titles at the Struer Energi Park, and is looking forward to another exciting title fight in front of a sell out crowd.

“It will be great to box again in Struer,” she says. “The audience always give me so much. There is going to be a lot of noise, and that will help propel me to victory!”

Tickets are available online via www.ticketmaster.dk or by calling (+45) 70 1