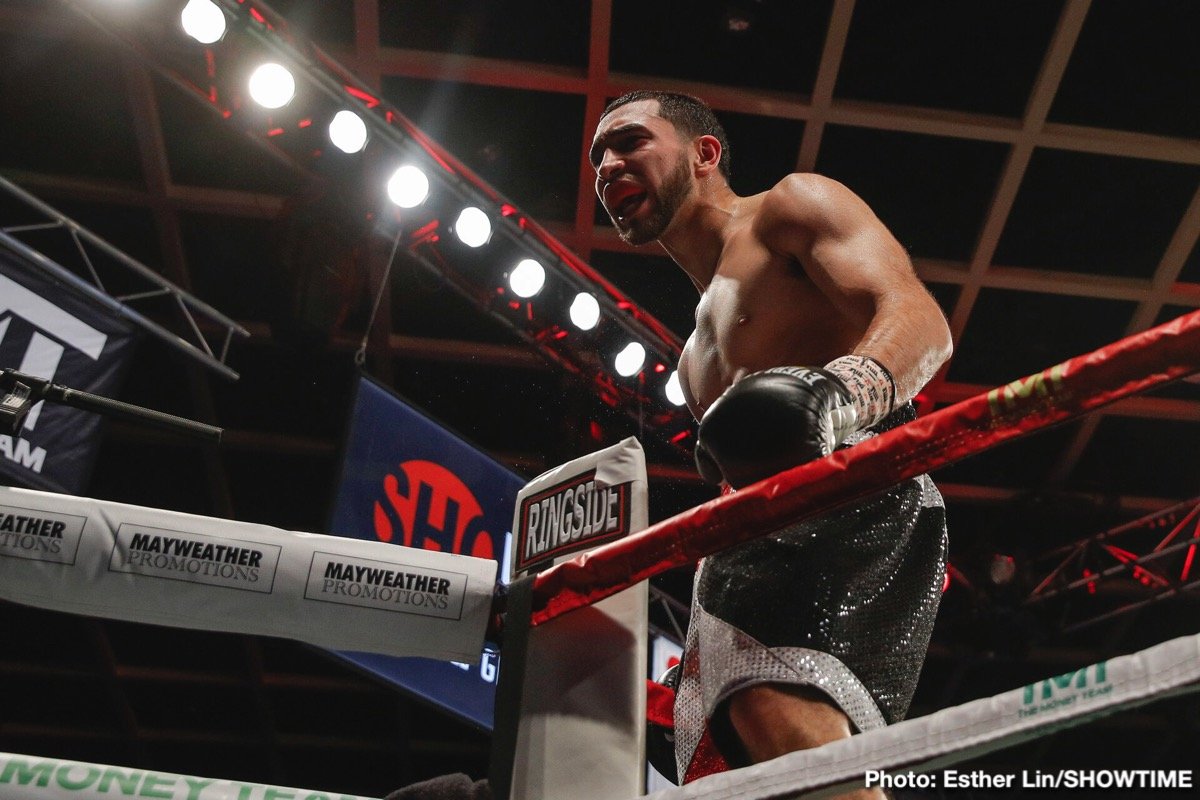 Undefeated super featherweight prospect Xavier Martinez returns to ShoBox: The New Generation for his second straight test on the series when he faces veteran Filipino Jessie Cris Rosales in the 10-round main event of a four-fight telecast on Friday, November 1 live on SHOWTIME (10:30 p.m. ET/PT) from Sam’s Town Live in Las Vegas.

Four of Mayweather Promotions top prospects will be on display, as 2016 Olympian Richardson Hitchins (9-0, 5 KOs), once-beaten Las Vegas native Kevin Newman II (10-1-1, 6 KOs) and undefeated knockout artist Rolando Romero (9-0, 8 KOs) will also fight in separate bouts. Welterweight prospect Hitchins will take on once-beaten Kevin Johnson (7-1, 4 KOs) in an eight-round bout, while middleweight prospect Newman will look to avenge the only loss of his career to Mark Anthony Hernandez (14-2-1, 3 KOs), a participant in the 2018 reboot of The Contender, in another eight-round matchup. Romero will open the telecast against an opponent to be announced.

“This is our second ShoBox show of the year and we’re happy to have made Sam’s Town our home for these events,” says Mayweather Promotions CEO, Leonard Ellerbe. “I can’t say enough that this is the perfect setting and platform to showcase our upcoming prospects. Xavier Martinez is one to watch for as he headlines his first ShoBox card. We have a very exciting line-up of fighters, both on and off-television, making for a card that you don’t want to miss.”

Martinez (14-0, 10 KOs), of Sacramento, Calif., has scored six straight knockouts, including a third-round stoppage of John Vicente Moralde in his ShoBox debut in April (Watch KO Here). The 21-year-old turned professional in 2017 in Mexico following an amateur career where he amassed an 85-10 record while competing in the 2012 and 2013 National Championships and earning a ranking as the No. 3 amateur in the country. Best known for his crafty and powerful fighting style, Martinez joined the Mayweather Promotions team in late 2016 with a unanimous decision win over Wilfredo Garriga at Sam’s Town Live.

“I am really excited to get back into the ring,” said the 21-year-old Martinez. “Sam’s Town has become my home away from home and I’ve had a lot of great performances there. I’m really just looking forward to putting on a great performance again on national television and reaching a larger audience. Soon enough everyone will know who Xavier Martinez is.

“Training camp is going great. I’ve added a strength and conditioning coach and a nutritionist. Having someone help me prep my meals and educate me on what’s going into my body has really helped me train better and get my body in the right shape. My energy level for training is different and I feel stronger.”

Rosales (22-3-1, 10 KOs), 27, turned professional in 2008 and started his professional career unbeaten in his first 22 bouts while competing mostly in his native Philippines. Rosales stepped up his level of opposition in 2017, losing to former two-division world champion Jhonny Gonzalez in 2017 and 2016 Olympic Silver Medalist and undefeated prospect Shakur Stevenson in 2019. In his last bout, he lost a close split-decision to undefeated prospect Tyler McCeary. Experienced against top opposition, Rosales’ three losses have come against opponents with a combined record of 96-11-1.

“He’s undefeated, but I have far more experience with better guys so I have that advantage coming into this fight,” Rosales said. “I’m coming off two tough fights and this one is going to be another great fight to test myself as a fighter as well as a good show for the fans. I’m back in the gym working on a couple of things, and I’m coming into this fight stronger and sharper.”

Hitchins (9-0, 5 KOs), from Brooklyn, N.Y., is a former two-time Golden Gloves champion who represented his parents’ home country of Haiti in the 2016 Rio de Janeiro Olympic Games, where he lost to team USA’s Gary Russell Jr. One of boxing’s top young prospects, Hitchins has sparred and trained with several world champions including Terence Crawford and stablemate Gervonta Davis. Just 21-years-old, Hitchins boasts incredible hand and foot speed and the boxing IQ of a veteran contender. Having fought eight out of his nine pro fights in his hometown, Hitchins will travel to Las Vegas looking for a statement win in his television debut.

“I’m ready to pick back up where I left off,” said Hitchins. “I’ve remained in great shape since my last opponent fell through back in July, but it worked out because now I get an opportunity to show my talents on national television. My brother Tank [Gervonta Davis] showed me a lot of things this summer and great techniques to sharpen my skills. I’m working hard and getting work in multiple gyms across different weight classes to help me with my speed and power. I’m going to give it my all and deliver with a dominating win.”

Johnson, a Las Vegas resident, started his professional career with four consecutive TKO wins. His past four fights have all come against undefeated opposition including a split decision win over Larry Gomez, who was 8-0 entering the fight, in his last outing in April. Johnson’s lone loss came against 2016 Olympic Gold Medalist Fazliddin Gaibnazarov.

“This is going to be an entertaining fight for the fans,” said Johnson. “I predict a fourth or fifth round knockout – that isn’t me being cocky, just me understanding what’s on the line. This is a huge fight for me and I’m going to rise to the occasion. I’m here to expose everyone I step in the ring with. I’ll fight anybody I feel is a good challenge. I’ve seen Hitchins spar Devin Haney and I’ve watched a few of his fights. He did really good, but I was able to identify some opportunities and I feel confident I can beat this kid.”

Las Vegas’ Newman started boxing when he was 9 years old and built up an amateur record of 25-5 before turning pro in 2014. Impressed by Newman’s skills and technique in the ring as an amateur, Floyd Mayweather signed the rising middleweight to his growing stable of fighters in the summer of 2014. Newman made his professional debut on the Mayweather vs. Maidana II undercard, where he fought to a draw with Azamat Umarzoda. He won his next seven contests before dropping a decision to his November 1 opponent, Mark Anthony Hernandez, on the undercard of Mayweather vs. McGregor in August 2017. He has since rebounded with three consecutive KO wins at Sam’s Town.

“I’m thankful to my team for another fight,” said Newman. “This is my third fight this year, and I’m looking forward to putting on a show and really ending this year with a bang. Training camp has consisted of great sparring with A-level guys, including Anthony Dirrell for his fight with David Benavidez. I was able to get a lot of quality rounds in already, and this is just the beginning of my training camp. I’m extremely sharp now so we’re just maintaining that and getting my body into fight shape.”

Hernandez, 26, of Fresno, Calif., is no stranger to fighting under the spotlight. After dropping a split decision to Kyrone Davis in 2017, Hernandez bounced back with the biggest win of his career over Newman on the undercard of the blockbuster Mayweather vs. McGregor event. Hernandez was among 16 professional fighters selected to compete at 160 pounds on the 2018 reboot of The Contender series. He earned a split decision over Danny Valdivia and a unanimous verdict over Quantavious Cash to finish behind champion Brandon Adams and runner-up Shane Mosley Jr. In February of this year, he suffered a setback in a rematch to Jeison Rosario, who he fought to a draw with in 2018, but rebounded with a unanimous decision win over Francisco Castro in his last bout.

“I expect Kevin to come better than he did the first time we fought,” said Hernandez. “The first fight was a clear unanimous decision for me. I didn’t think there was any controversy. He has his reasons as to why he didn’t perform, but that doesn’t matter to me. I went up in weight to take that fight from 154 to 165 pounds so I was also coming in with a slight disadvantage, and now I’m moving up again to fight him again. I out-boxed him and out-fought him the first time and fans can expect a great fight again. He’s a really good fighter, I won’t take anything from him. Moving up again will be a challenge, but I think I can beat him again.”

Rising lightweight prospect Romero, born and raised in North Las Vegas, started his boxing career at age 18 after spending much of his youth competing in Judo. Despite a limited amateur career consisting of just 45 fights, Romero gained the attention of Floyd Mayweather and was signed to his promotional company in November of 2016. He made his professional debut the next month and scored a TKO just over a minute into the fight. With eight stoppages in nine professional fights, Romero packs a heavy punch and will be looking for his fifth straight knockout on November 1.

“It’s been a great year for me professionally,” said Romero. “I’ve been able to gain an even larger fan base since my last performance earlier this year and I’m excited to do what I do best and that’s knocking out the competition and continuing to grow as a fighter. A lot of people have doubted me for my lack of amateur experience, but my power and boxing IQ are undeniable. I’m taking the experience from my last fight and working to correct a few things. My goal is to become the most versatile fighter backed by power.”

Tickets for the Mayweather Promotions’ Sin City Showdown go on sale tomorrow/Wednesday at 12 p.m. PT, start at $25 and can be purchased by visiting: mayweatherpromotions.com/events/.