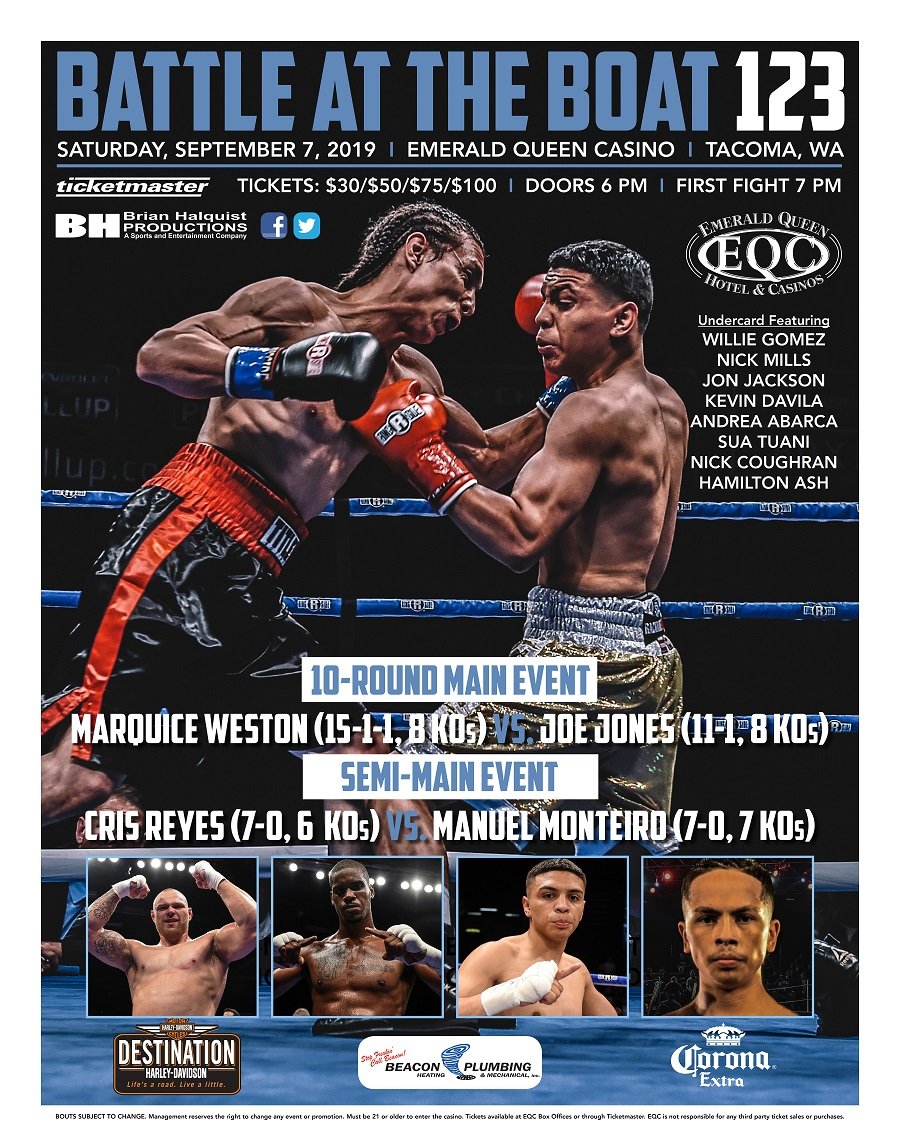 Rising stars Marquice Weston and Cris Reyes will both face their toughest challenges to date when they step back inside the ring.

Weston will meet Joe Jones in a 10-round cruiserweight main event and Reyes will square off against knockout specialist Manuel Monteiro in a 5-round welterweight contest at Battle at the Boat 123 on Saturday, Sept. 7 at the Emerald Queen Casino in Tacoma, Wash.

“We are thrilled to have Marquice and Cris once again fighting at Battle at the Boat,” promoter Brian Halquist said. “Both are such exciting young fighters and to have them both on the same card is incredible. Both are going to be tested as Jones and Monteiro bring very strong resumes into their fights. It should all add up to another great night of boxing at the Emerald Queen.”

Weston, a native of Tacoma, brings a stellar 15-1-1 record into his bout against Jones, who owns an equally impressive record of 11-1.

A multiple-time Tacoma Golden Gloves champion as an amateur, Weston brings an eight-fight winning streak into the bout with his most recent triumph coming Oct. 27, 2018 against Joey Montoya.

Weston’s only career setback came against Montez Brown when he lost a majority decision on Dec. 10, 2016.

Interestingly, Jones is coming off a TKO victory over Brown on April 20, setting up an intriguing matchup against Weston.

The battle between Reyes and Monteiro will feature two undefeated fighters as both boxers bring spotless 7-0 records into the showdown.

Reyes, who fights out of nearby Renton, Wash., has knocked out 6 of his 7 opponents with his most impressive win coming during his last time out with his first-round TKO victory over Lennard Davis on June 1.

Monterio is no stranger to ending fights early as he has KO’ed all seven of his opponents and is 3-0 in 2019, last winning by knockout on June 28.

The bout between Reyes and Monterio won’t be the only bout starring two undefeated fighters on the card as Jon Jackson (3-0) and Nick Mills face off in a heavyweight match on the undercard.

Battle at the Boat 123 will also feature a crusierweight bout between Sua Tuani and Nick Coughran and a welterweight fight between Willie Gomez and Hamilton Ash.

Battle at the Boat 123 Card