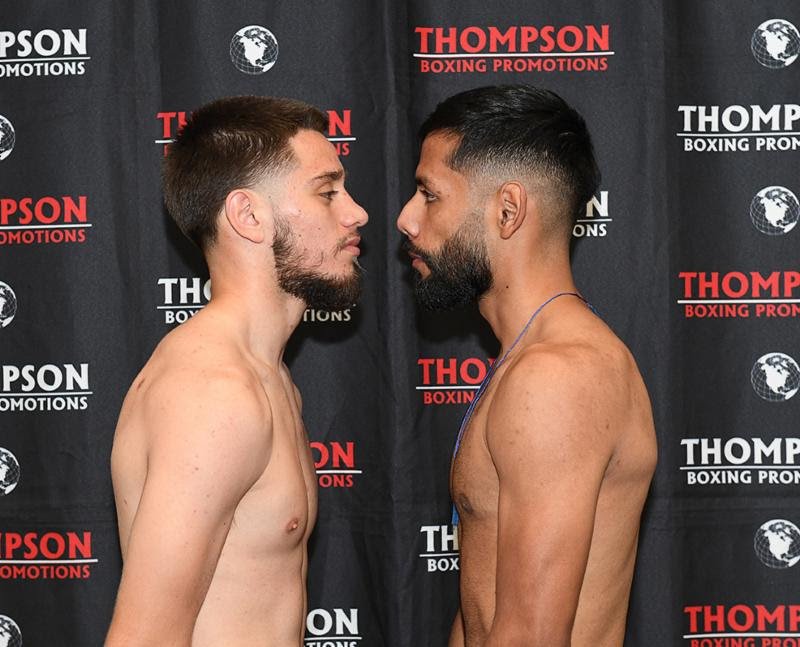 Featherweight Ruben Villa (14-0, 5 KOs) returned to his hometown for the second time in his career and delivered a thrilling, one-sided performance against the game Miguel Carrizoza (10-4, 2 KOs) Saturday night from a sold-out Storm House in Salinas, Calif.

Villa, 21, used terrific footwork to find the angles against Carrizoza in route to a sweep of the scorecards in the 8-round main event. Throughout the fight, Villa hammered Carrizoza with a stiff jab, followed by a thundering left hand. It was an outstanding display of accuracy for the southpaw in his fifth fight of the year.

“I felt great tonight,” said Villa, who is promoted by Thompson Boxing and Banner Promotions. “Everything was clicking. The guy was tough. I landed a lot of good shots and he came coming back. I’m very happy with my performance. I put on a great show for my hometown fans.”

Villa, who has been as active as possible since joining the professional ranks in 2016, looked as comfortable as he ever has.

“I’m gaining more and more confidence with each win,” Villa said. “I like where I’m at right now.”

The fight, which was scheduled for six rounds, featured plenty of back-and-forth exchanges with Moreno getting the best of Martinez in nearly every one of them. The third round featured the most action, with both boxers throwing and landing strong shots.

Moreno, however, landed the heavier shots throughout the fight. He varied his punches and connected to the body on a far more frequent rate than Martinez.

Becerra used a cautious and methodical approach to score points. He worked from the outside by throwing his jab and following it up with power shots. Too often, however, Becerra backed off the action and remained committed to working his distance.

Napa’s Brandon Trejo (4-1, 2 KOs) picked apart the still winless Mario Franco (0-4) of Mexico and did enough work to earn a stoppage win in the fourth and final round (1:56).

Trejo, who last lost in April from the very same venue, avenged his only defeat with an aggressive attack that stymied the awkward style of Franco. In the third round, Trejo rocked Franco with steady combinations and followed up with the same pressure in the fourth, so much so, that referee Ed Collantes stopped the fight.

Bantamweight prospect Eros Correa (3-0, 2 KOs) of San Jose, Calif. came out from the start with heavy pressure against Mexico’s Neri Garcia (1-7). The Northern California fighter backed up the less skilled Garcia with jabs and overhand rights.

In the second round, Correa began to pour it on, routinely splitting the guard of the lanky Garcia. Referee Ed Collantes had seen enough and put a stop to the contest at the 2:47 mark.

Junior lightweight Arnold Dinong (2-0, 1 KO) of Hawaii opened “New Blood” with a bang by knocking out the outmatched Josefat Vazquez (5-6, 3 KOs) of Mexico in the second round.

Dinong struck pay dirt in the first by landing a combination that put Vazquez on the floor. In the second, Dinong came out thinking knockout and landed a left hook to the chin that dropped Vazquez once again. Referee Gerard White put a stop to the fight after that at the :20 mark.

Villa, 21, returns to the Salinas Storm House in his hometown of Salinas, Calif. for the second time this year. Villa vs. Carrizoza is the the 8-round “New Blood” main event.

Villa last fought from the Storm House in April, when he routed fellow prospect Marlon Olea in route to winning the vacant WBO Youth featherweight championship. It was Villa’s first title since turning professional in July 2016.

The two-time national Golden Gloves winner fights for the fifth time this year after registering six wins in 2017.

Remaining tickets for “New Blood” are priced at $75 & $125 and are available for purchase from the Storm House on the day of the event (Saturday) starting at 4:30 p.m. local time.