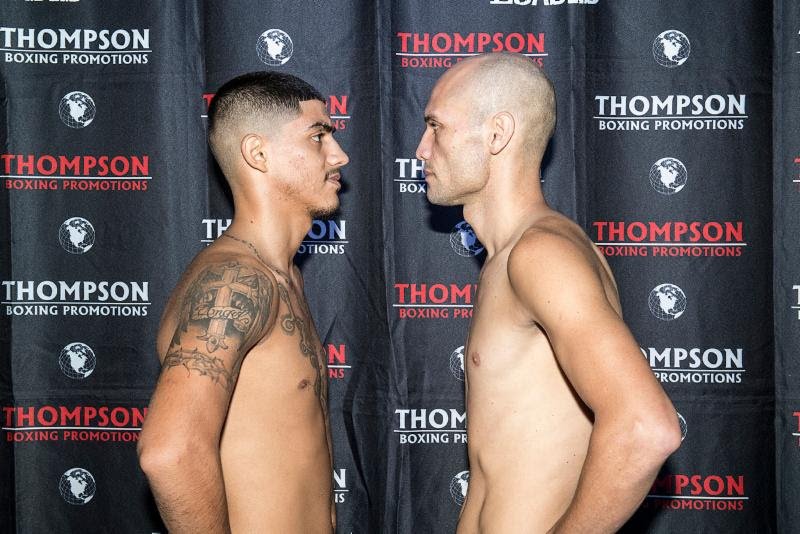 Junior lightweight Michael Dutchover (11-0, 8 KOs) put on another impressive performance on Friday night, this time knocking out the bigger Bergman Aguilar (14-4-1, 4 KOs) in the fifth round of Thompson Boxing’s “New Blood” main event.

Dutchover, 20, used controlled body punching to end Aguilar’s night in the fifth round of a scheduled 8-round fight. The Midland, Texas native, who conducts training camp in Los Angeles, zeroed in on the body from the outset.

A pinpoint left hook to the body sent Aguilar to one knee in the fourth round. By the fifth, Dutchover had knockout on his mind.

“Once I started letting my hands go, that’s when things started opening up,” said Dutchover, who is promoted by Thompson Boxing and Banner Promotions. “In the third round I turned up the pace. By the fourth everything started to click. I rocked him with some body shots and got a knockdown. I knew he was getting tired. I knew my punches were wearing him out so I made the choice to take him out in the fifth.”

Official stoppage time came at the 2:31 mark of the fifth round.

To watch the full slate of fights, including the Dutchover knockout, please click here for our YouTube link.

In the “New Blood” co-feature, Mario Hernandez (7-0-1, 3 KOs) of Santa Ana, Calif. appeared to produce enough offense to win by decision over Ivan Gonzalez (4-1-2, 1 KO), but the judges saw it differently. Two judges scored the bout even at 57-57, while the third awarded it to Hernandez 58-56. The 6-round bout ended in a majority draw.

While some rounds were indeed close, Hernandez looked like the better fighter through most of the fight. He targeted the body with left hooks and would follow up with overhand rights. Hernandez was never hurt and he did manage to stun Gonzalez with his power punches on multiple occasions.

Lightweight talent Ruben Torres (7-0, 6 KOs) of Los Angeles used his compact punching to thoroughly dismantle the shifty Eder Amaro (6-6, 2 KOs) of Mexico. Torres battered Amaro with strong combinations in route to a fourth round technical knockout. Amaro was unable to continue after the fourth round.

Torres did well to side-step Amaro’s changing stances. He frequently switched from southpaw to orthodox, but in the end, it wasn’t enough to frustrate Torres. Torres was too skilled for Amaro’s gimmicks. He landed heavy shots and displayed superior defensive ability to solidify his blue-chip prospect status.

Junior middleweight Richard Brewart (2-0, 1 KO) of Rancho Cucamonga, Calif. looked polished beyond his years during his second round knockout of Houston’s Edward Aceves (0-5).

Brewart attacked the body early and earned a first round knockdown by going to the midsection. The 20-year-old followed the same script to pay dirt in the second round.

He landed several hard body shots that pushed the still winless Aceves into a neutral corner. Aceves cringed after each punch, which prompted referee Edward Hernandez to step in and stop the bout at the 1:32 mark.

Junior welterweight David Ortiz (1-0) of Bloomington, Calif. made his professional debut a memorable one with a sweep of the scorecards over Mario Angeles (2-11-2) of San Diego. The 4-round fight featured some solid exchanges with Ortiz getting the best of Angeles.

The pair battle in the 8-round main event from the Doubletree Hotel in Ontario, Calif. this Friday, Sept. 21.

Dutchover, 20, typically fights several pounds over the junior lightweight limit. For Friday’s headlining bout, Dutchover will fight at the heaviest weight of his career. Aguilar will pose a challenge to the young Dutchover in that he will be the naturally bigger fighter of the two.

“Weight doesn’t win fights,” remarked Dutchover after weighing in. “Skill wins fights. I’m more skillful than him. I don’t see how this guy is going to beat me.”

Tickets for “New Blood” will be available for purchase on the day of the event (Friday) starting at 5:30 p.m. local time from the will call booth at the Doubletree Hotel in Ontario, Calif.

Dutchover is promoted by Thompson Boxing and Banner Promotions.