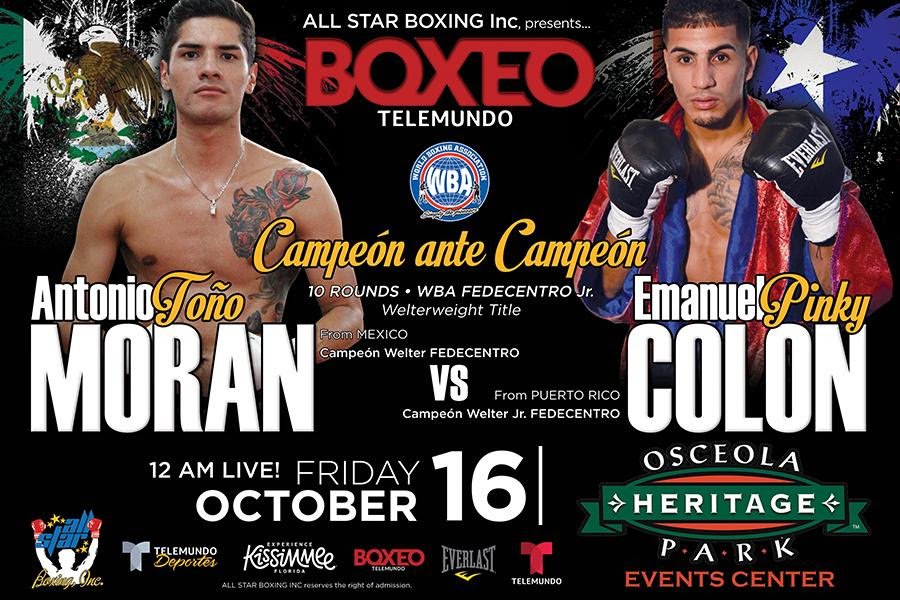 These two young warriors have a foe in a common, fighter from San Luis Potosi, Mexico, Richard Zamora, Antonio Moran won by KO in the first round, and Pinky Colon did the same.

Colon is looking to continue his good fortune by cementing his name to title contender status with a win over game Toño Moran. Last October, Moran spoiled prospect Yomar Alamo’s party when he fought undefeated Alamo to a controversial draw. Many in attendance believed Moran had done enough to get the nod.

” I’m ready; these are the kind of challenges that keeps me going in boxing. This is my third fighter from Puerto Rico.; I feel as I’m 1-1 with Puerto Rican fighters. God willing, I will be 2-1 this Friday,” said Antonio Moran.

“When my team approached me for this fight, I was all in. If I want to become a title contender, I need to beat guys like Moran. No excuses. I saw Alamo’s fight with him, and I learned many of the do and don’ts on fighting Moran. I have power in both hands, and so does he. It’s a matter of who can catch,” said Pinky Colon

Champion v Champion, Colon v. Moran, will be televised LIVE at 12AM through Telemundo. Check your local listings.