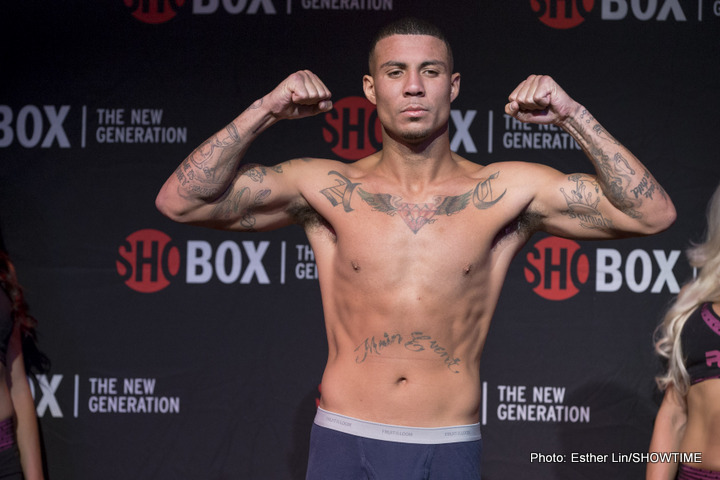 One of the 1st televised pro boxing cards without a big name promoter associated with it will be televised on CBS Sports Network, Tomorrow Sat. July 11, 2020. The Bigger Than Life Entertainment company event will be headlined by a 12 round WBL World Cruiserweight fight in between Deshon Webster (12-3) and Samuel Clarkson (22-6). Clarkson (22-6, 15 KO) previously lost to Dimitri Bivol in a 2017 fight WBA light heavyweight championship bout. The broadcast team for this CBS Sports Networks Boxing event will include 2012 International Boxing Hall of Famer, 2018 Washington DC Boxing Hall of Fame & 2021 Nevada Boxing Hall of Famer, Mark “Too Sharp” Johnson. Fans can watch the stream of this event on CBSSports.com or the CBS Sports App at 10 pm EST, Sat. July 11, 2020.

Las Vegas, NV—Bigger Than Life Entertainment, Inc. is putting on the ultimate championship fight of the year: Making A Champion: Webster vs. Clarkson. This monumental fight, part of the Making A Champion Boxing Series, will take place on CBS Sports Network at 8pm EST. The unforgettable event will take place in Biloxi, Mississippi at the Mississippi Coast Coliseum & Convention Center on Saturday, July 11, 2020. The event is sponsored by Joe Louis Bourbon and Advanced Medical Screening, Inc. (www.advancedmedicalscreening.org).

This extraordinary championship fight will not only be a night to remember for its world-class boxing, it will also be a chance for the boxing community to give back. Making A Champion will be dedicated to helping the Black Lives Matter Foundation, which aims to build power to bring justice, healing, and freedom to black people across the globe. There will be a Memorial Bell Ten Count at the beginning of the fight. A Memorial Bell Ten Count is the ringing of a bell ten times, prior to the start of a fight in boxing, in honor of a recently deceased fighter. The Memorial Bell Ten Count at this Making A Champion event will be dedicated to all of the black men and women who have fallen at the hands of the police. It will be a chance for the boxing community to join in solidarity with the Black Lives Matter movement to bring justice for all!

E Jay Mathews, founder of Bigger Than Life Entertainment, Inc., felt it was his duty to give back to the community and to Black Lives Matter. According to Mathews, “This is a time where the American people from all walks of life are taking to the streets to be heard. On July 11, we will do our part by giving money to the Black Lives Matter Foundation. We are proud to do our part in the campaign against violence and systemic racism towards black people.”